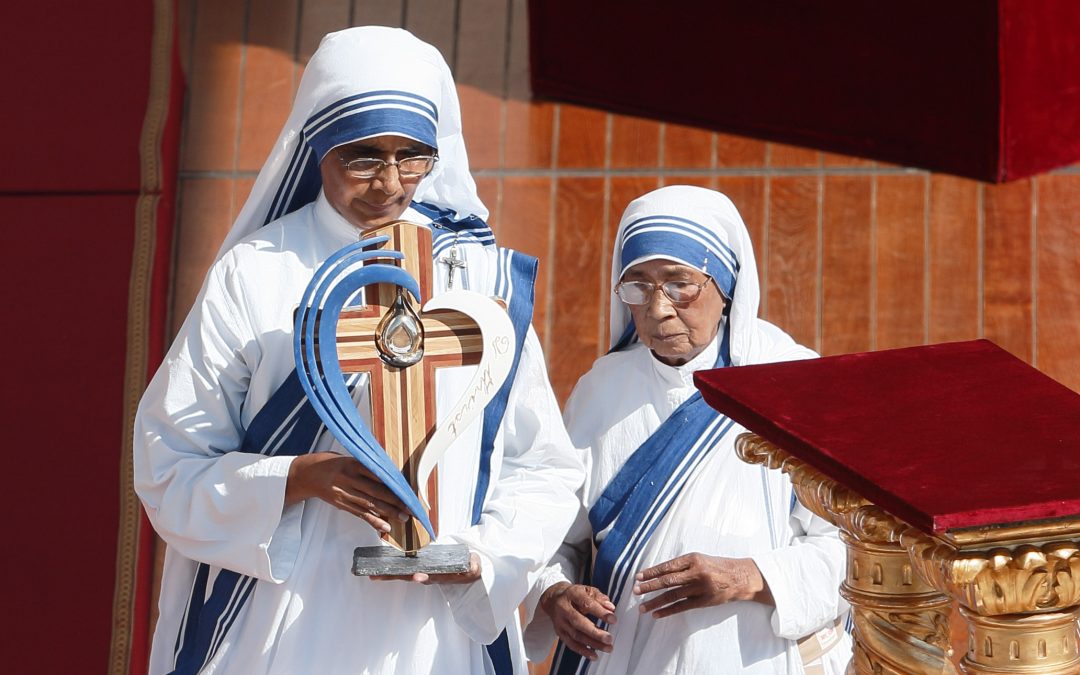 VATICAN CITY (CNS) — At every canonization ceremony, people connected to the new saint carry to the altar a relic — often a bone shard from the new saint’s body. The relic presented at the Mass for St. Teresa of Kolkata was a few drops of her blood.

A relic is like a keepsake, a tangible reminder that the new saint was human yet heroically lived a life of holiness.

The relic is kept in a reliquary, which often is an ornate work of art in gold or silver.

But Missionaries of Charity Father Brian Kolodiejchuk said the reliquary chosen for Mother Teresa’s relic is simpler, reflecting her life and values.

The front of the large cross is made of wood taken from places associated with Mother Teresa’s works of mercy: The first home for the dying she established in Kolkata, a home for those with Hansen’s disease, an immigrants’ boat, a Gypsy shack. But there also is wood from the kneeler of a confessional because Mother Teresa believed the sacrament was the greatest expression of God’s mercy, said Father Kolodiejchuk, official promoter of Mother Teresa’s sainthood cause.

In the center of the cross, Mother Teresa’s blood is sealed in a glass orb in the shape of a water drop as a symbol of her vow to quench the thirst of those literally without water and those dying in the aridness of being unloved, said a statement released by Father Kolodiejchuk.

The glass orb is supported by a roughly sculpted, wrinkled hand, “which carries this drop full of love to respond to the cry” of Jesus on the cross — “I thirst” — a cry echoed by millions of people around the world, the statement said.

The water drop is surrounded by two sweeping bands of blue and white, recalling the sari Mother Teresa adopted as a habit. The bands form a heart on which the words, “I thirst,” are reproduced her in handwriting.
The base of the reliquary is made of battered iron “to represent how society always sees the poor people whom Mother Teresa loved with her whole heart,” the Vatican said.