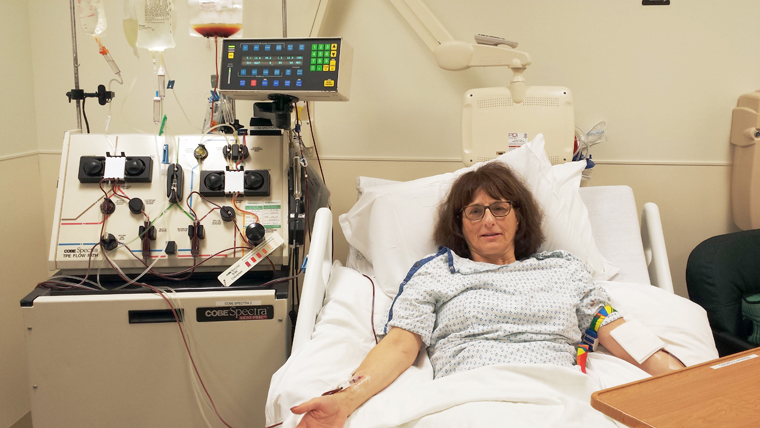 The “prayer warriors” have mobilized, and the target is a miracle.

Susan M. Januszewski, RN, turned from nurse to patient when she donated her stem cells in the hope of saving her “very kind and loving” sister who was diagnosed with non-Hodgkin’s lymphoma (a cancer) and Langerhans cell histiocytosis (a disease of the white blood cells).

A parishioner at St. Mary of Mount Carmel-Blessed Sacrament Church in Utica, Januszewski belongs to two prayer groups that are, in effect, soldiers in supplication: her “faithful circle.” They pray for one another, for souls in purgatory, for members who have passed on, for an end to abortion, and for all the children of the world.

But Januszewski also solos on prayer missions: She prayed five or six rosaries while driving to the pre-transplant appointment in November in Philadelphia. Her sister Janet Martellotto Streeper, of southern New Jersey, was discharged from the hospital Jan. 11 and is now recuperating from the stem-cell transplant.

Januszewski noted: “Every day is a gift for any of us. … Everything went as smoothly as it could with the donation and now it’s in God’s hands for the rest of her journey. Miracles do happen.”

Father James Cesta, pastor of St. Mary of Mount Carmel-Blessed Sacrament, admires such faith, which was instilled by parents Nicholas and Dolores Martellotto. All seven children received a Catholic education.

Father Cesta described Januszewski as a very prayerful, faithful, dependable person who goes beyond the call of duty as a parishioner and as a nurse. “Not too many people might offer to do that,” Father Cesta said of the stem-cell donation.

A touch of the medical professional’s clinical fascination imbued Januszewski when she entered the room for the stem-cell harvest. She appreciated all the complexities of her blood being extracted from one arm, sent through a machine to separate the desired cells, and then reflowed into her other arm.

“Sometimes too much knowledge is not good,” she said, because a little fear crept in.

She endured pre-procedure shots to stimulate her bone marrow, and as her blood was harvested and filtered she had to keep one arm extended for eight hours. Again, she prayed the rosary, and she wore a St. Marianne Cope bracelet that a “dear fellow prayer warrior, Rose Zennamo, gave me before she passed away.”

Afterward, Januszewski endured severe bone pain from the injections, temporary swelling due to IV therapy, and bruising from the intravenous catheters.

“It was an interesting journey,” she said.

The biggest reason to publicize the sisters’ story is the importance of faith, Januszewski said.

“It’s so important to make sure that you develop your faith and associate with people that can help you at times like this,” she said.

One of those praying for a cure for Martellotto Streeper is Alice Sunderlin, of Whitesboro. Sunderlin and Januszewski attend the Tuesday Night Rosary Group at the home of Jimmy and Patty Salerno in New Hartford.

“We prayed the rosary and prayed the rosary, asking that Susan and her sister would be taken care of, yes,” Sunderlin said. “That’s our strength. I will do whatever God puts into my heart to do.”

Patty Salerno said the rosary group that has been meeting in her home for 8½ years averages 90 to 100 people per week. Asked about the “prayer warrior” nickname, she said it’s “because we pray diligently. When we need prayers we call each other.” In the summer, weather permitting, the group prays the rosary at the shrine built outside the Salerno home.

Patty said Januszewski’s stem-cell donation was miraculous in itself, and “I really do believe her sister will be fine. I believe in the power of prayer. I truly do.”

Januszewski said Martellotto Streeper is too weak at this point to comment publicly due to ongoing blood work and evaluations. Before she received her sister’s stem cells, she underwent full-body radiation and intense chemotherapy. Her lungs and kidneys were affected.

Her niece and godchild Sarah Dallas, of Philadelphia, has organized an online fundraiser for Martellotto Streeper at www.youcaring.com/Janet-Transplant. The website notes that Martellotto Streeper, who owns a hair salon, was diagnosed in 2006. She underwent three years of chemotherapy and reached remission.

In the years since, she became a grandmother to her daughter Nicole Horan’s two children. Martellotto Streeper enjoyed watching them a couple of days a week until she started experiencing symptoms again.

“I feel a special bond with Janet that I’ve had since I was a child,” Dallas said. She added that her godmother is “always full of wisdom, always has great advice, always warm and friendly to everyone she meets.”

Januszewski and Martellotto Streeper are among seven children in their family. Ranging from the oldest to the youngest, they are Janet, Donna, Maureen, Susan, Annette, John, and Michael.

Testing revealed that Susan and Michael, who lives in Italy, were a match for Janet’s stem cells, and the doctors selected Susan as the donor. The idea is that the stem cells she donated will reproduce so that her sister will have a healthy immune system.

These days Januszewski is a workout warrior as well, going to a gym at 5:30 a.m. She decided to be even healthier than she had been.

“People should really focus on health and staying as healthy as they can,” she said.

Many prayers, many miles