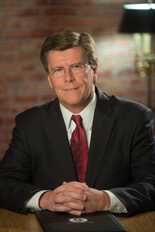 “Bishop Cunningham is pleased to announce the appointment of Mr. Stephen Breen as Chief Financial Officer and Treasurer of the Diocese of Syracuse, effective July 23, 2018,” the diocese said in a statement.

John Barsanti, who previously served the diocese as CFO and chief operating officer, moved into a part-time role overseeing the implementation of the diocese’s strategic plan and other special projects April 1.

According to the announcement, Breen is a Certified Public Accountant who had leadership roles with The Cortland Companies from 1998 to 2016, including Chief Financial Officer and Global Business Leader of Cortland’s rope business. He has previous experience with Baasch, Winters & Breen and Coopers & Lybrand. He is a graduate of C.W. Post College. Breen has served on the Pastoral Council of Cathedral of the Immaculate Conception for many years. He also serves on the Board of Directors for SUNY ESF College Foundation and Clear Path for Veterans.