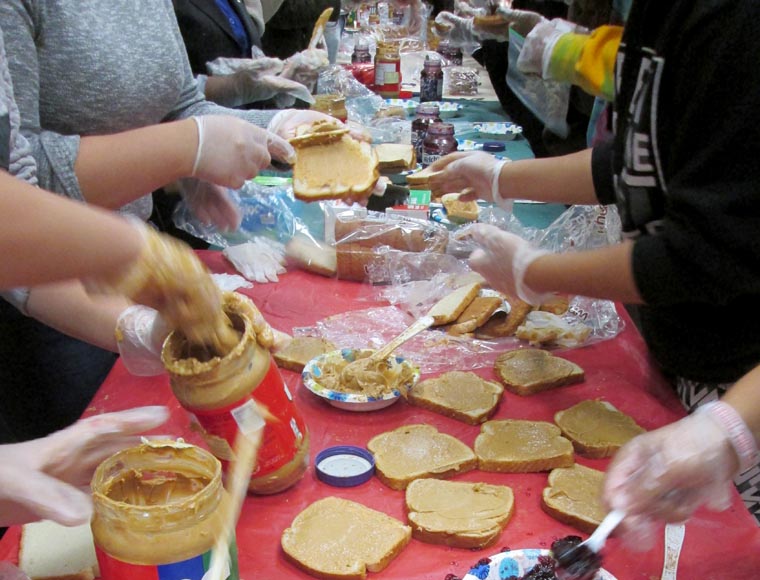 Syracuse and ESF students crank out sandwiches for charity

So cerebral is the freshman that his brainstorm popped out in a matter-of-fact tone, as if he had just gotten another boring “A.”

Syracuse University’s Jacob Greco was challenged to come up with a name for his group that makes peanut butter and jelly sandwiches for charity one night a month.

“Thursday Night Jam,” he said. To him, it was the most obvious answer on campus.

His colleagues on the PBJ team erupted in praise.

“Ohhhhhh, how about Jam!” said Jeremiah Deep, campus minister at the SU Catholic Center. “Yeah! Oh man! I like that, I like that — we might steal that!”

“Ohhh, that’s a good one. I like it,” said Katie Rupp, a sophomore at SUNY ESF.

It was a vibrant night at the SU Catholic Center. First came Mass at 7 p.m., then dinner at 7:30. Then came the PBJ “assembly line,” as SU/ESF Catholic Chaplain Father Gerry Waterman, OFM Conv., called it: About 40 students stood in two rows on either side of a long table. From eight to nine o’clock, they molded 312 sandwiches that campus minister Deep refrigerated overnight and then delivered the next day to the Samaritan Center in Syracuse.

“The sandwiches made by the SU Catholic Center provide a lunch for someone at a new job, something to carry our guests through when hunger strikes in the middle of the night, and even sometimes the rescue when a blood sugar level drops,” Mary Beth Frey, executive director of the Samaritan Center, said in an email. “They are more than just PB&J, they are hope, love, and kindness in a small plastic bag. We are beyond grateful for this wonderful gift.”

Love and kindness were evident as plastic-gloved hands plunged utensils deep into peanut-butter jars and wholesale-dumped clumps from jelly jars into plastic bowls for the most efficient sandwich-construction technique.

Greco, from Pittsburgh, said one savvy colleague instructed him in the proper method: Put the peanut butter on both pieces of the bread; then add the jelly in the middle so that the bread doesn’t get too soggy.

He is majoring in health and exercise science; he might become a physical therapist someday. He figures that he will volunteer to help out at the Catholic Center for his entire SU career.

“I meet a lot of nice people for the Mass and for the dinner afterwards,” he said, “but this is a nice extension of that where we get to come together and do something for other people.

Rupp, from Buffalo, is majoring in conservation biology; someday she might do research on some sort of endangered animal or plant, or study some disease affecting trees.

People who are hungry are endangered too, so she is happy to volunteer to help.

Like Greco a scientist, she considered the science of PBJ-making: “I do a thick layer of peanut butter too, so the jelly can soak in. … I also just like it spread all the way to the edges. I don’t like it when people just put the peanut butter and jelly in the center, and it doesn’t reach all the way out. It’s got to cover the entire slice.”

She took a year off after high school to perform service work for AmeriCorps. “And when I came to school I felt like I was stuck in school, and I didn’t have that other aspect of my life that was service.

“So I definitely wanted to put that into my life and make it a priority. So that’s … what I try and do here at the Catholic Center.” She also makes friends in the Power Hour, a Bible study group that meets on Tuesday nights.

Of her service projects, Rupp said: “I wish I could say I did it just because it’s a good thing to do, but I feel good after I do it, so that’s definitely a good pusher too. … I think if you have the time to give of yourself, then why not. I think, especially for people who aren’t living in the midst of need, doing something charitable opens your mind to maybe what other people are going through, and I think it’s important to know that because it may change the way that you act or live your life.”

Peanut butter and charity is also a good mix for Will Hoffman, an ESF senior from Niagara County. He figures it takes about 40 seconds to make a PBJ sandwich.

“It’s a good way to kind of come off a busy week, and come here [to Mass and dinner] and just be with God and be in a peaceful setting,” he said.

He majors in paper engineering; he might work someday as a process engineer in the paper industry. It requires a lot of intense study of chemical engineering and time in the library until 11 p.m. But he has managed to find a “pretty good balance between school and life and work and everything.”

He added: “I’m involved here with doing retreat-leader things and I’m involved with cleaning up parks around the surrounding neighborhoods. We have a campus day of service at ESF that I’m usually involved with. So during that we’ll go to a nearby park and clean it up. I’ve done a thing where I’ve gone to the MOST museum, and I helped out, I volunteered, educating others.”

Father Waterman said in an email that Thursday night Mass and dinner is an SU Catholic Center tradition dating to the time of the late Msgr. Charles Borgognoni’s spaghetti dinners. This year, he said, the Catholic Center has added “other delectable delicacies” such as chicken and biscuits and “breakfast for dinner.”

The white and wheat bread for the “Thursday Night Jam” is donated by Freihofer’s Bakery Outlet on Teall Avenue in Syracuse, and the peanut butter and jelly either comes from Catholic Center funds or others like the Alpha Kappa Psi service fraternity.

“It always amazes me to see that the number of ‘regular’ Thursday Mass and dinner goers increases significantly on the last Thursday of the month,” Father Waterman said. “Many want to give back whenever they can. We at the SU Catholic Center are delighted to provide them this opportunity.”

“We gladly take donations for P, B, and J; we always need it for making the sandwiches,” Deep said.

As they made the 312 sandwiches, he said, the students showed a great attitude: “They all really worked really hard; they love coming out, and it’s a … great way to do service, to make a difference, and do something pretty quickly.”

As he spoke, the long table used for the project was already cleaned up and gone, as fast as a person could scarf a PBJ.