Summing up Ludden star: ‘She has everything!’ 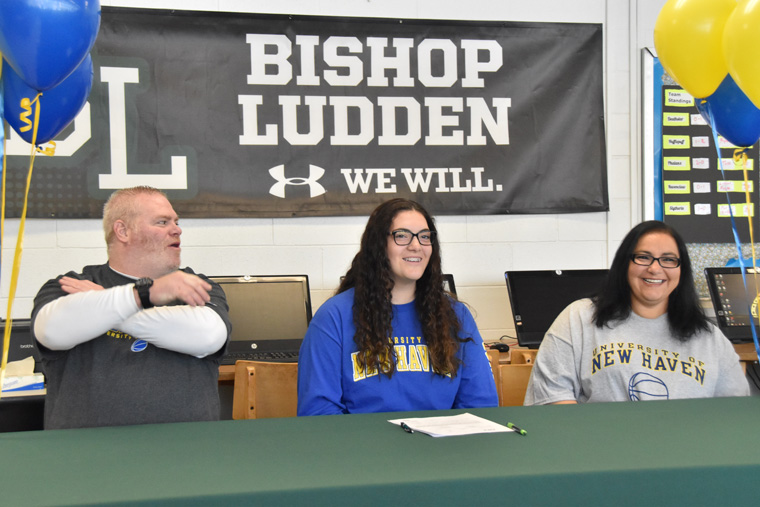 Aurora Deshaies thinks that one day she may be solving cases for the FBI. Opponents this season will find it very hard solving her on the basketball court.

The six foot, one inch center commences her senior year for a Bishop Ludden Jr./Sr. High School team that will be seeking its third consecutive sectional title.

She started playing basketball only four years ago, but she is only 200 points away from 1,000 for her career. Her talents invite one-word descriptions:

Another word would be “quick,” for her footwork and her intellect: She has been on the high honor roll for her entire Ludden career, and she belongs to the National Honor Society.

BREAK OUT THE CAKE

Her fans gathered Nov. 19 at Ludden to have some cake amid the balloons and celebrate her signing of a national letter of intent to play basketball for the Division II University of New Haven. Her uncle is in the FBI, and she is interested in studying forensics.

“When I was first looking at colleges,” Aurora said, “I really didn’t think about D-I, D-II, D-III, I just wanted to play ball in college. So when I heard about New Haven, it’s near my uncle’s house, so I just wanted to go visit.”

Kirk supported the college pick, saying New Haven’s new coach projects an attitude of “We’ll get the job done but I’m not gonna scream and holler at you.”

“I think the University of New Haven is a great choice for Aurora,” AD Driscoll said. “Academically and athletically. New Haven competes in the Northeast-10, which for women’s basketball is arguably one of the five toughest conferences.”

New Haven Coach Debbie Buff said in an email: “We are very excited to have Aurora next season. She comes from a highly respected AAU program and we were able to evaluate her multiple times this summer.

“As a new coach, this will be my first recruiting class. Her physical presence at the post is something needed in our program. She will bring physicality and rebounding to an athletic lineup. She comes from a great family and we are excited to welcome all of them to our Blue and Gold family. Go Chargers!!”

For the moment, though, it’s “Go Lady Knights.” The Ludden girls will play in Class B for the regular season again, but this year they will move up to Class A for the playoffs. That means facing teams such as Jamesville-DeWitt, Indian River, and Whitesboro.

Last season, Aurora averaged 16.9 points and 8.8 rebounds. She has been named all-state in both basketball and volleyball; she owns several school volleyball records. “She has everything!” Driscoll said.

“Athletics run in our family,” Kirk said. His cousin Jim Deshaies pitched in the major leagues for over a decade, Kirk and his two brothers played college football, and Aurora has two cousins who compete on college track teams.

And Aurora’s mom, Angela Sanford, played soccer for Ludden. “We’re very excited” about New Haven, said Angela, who added that Aurora visited quite a few other colleges and had other ones in the works before making her decision.

At Ludden, Angela was a soccer teammate of new Lady Knights girls basketball coach Carm Petrera. “I played sweeper. … I gave her the ball,” Petrera recalled.

Petrera, who graduated from Ludden in ’96, played point guard and shooting guard for the Lady Knights’ basketball team, and she still holds the all-time assists record for boys or girls basketball at Ludden. She also held the scoring record for 20 years before it was broken by Danielle Rauch, who now plays for the University of Michigan.

To prepare herself for the Ludden job, Petrera worked as an assistant with Westhill Coach Sue Ludwig and Cicero-North Syracuse Coach Eric Smith. “I couldn’t have been any luckier,” she said. By hiring her, Driscoll “made a dream come true for me,” she said. “This is definitely life coming full circle for me.”

‘A GAME OF ADJUSTMENTS’

Petrera, who also teaches physical education at Ludden, said Aurora “gets the concept of basketball; basketball is a game of adjustments. And very few athletes today can adjust according to the game.”

The coach said she has at least 10 players who can be a threat this year: “I would love to have a positionless team. So all my players — they need to know how to dribble, they need to shoot, they need to be more effective all over the court, rather than in certain spots.”

For example, she even has Aurora working out as a guard: “I’m trying to prepare her for the next level.”

That makes sense to Aurora’s dad, who said, “Her strength, in my opinion, is No. 1, she can outrun anybody on the court — she’s in really good shape. And No. 2, it’s her footwork — she’s got really quick feet.”

Aurora played basketball over the summer with the I-90 Elite Amateur Athletic Union program, which draws players from Syracuse, Buffalo, Rochester, and Albany. They travel around the country and play tournaments in front of college coaches.

I-90 Elite Director Randy Wright, who also coaches the Nottingham High School girls varsity basketball team, said Aurora improved her footwork and patience this past summer when she played for the 11th-grade I-90 team that he coached. Opponents are going to double-team her a lot, he said, so she has learned to recognize the double-team, step away, and hit that 12- or 15-foot shot. “Gotta have the patience,” Wright said. “The willpower and the patience.”

“I think she’s gonna dominate, to be honest with you,” Coach Wright said.

He added: “She should have a field day.”