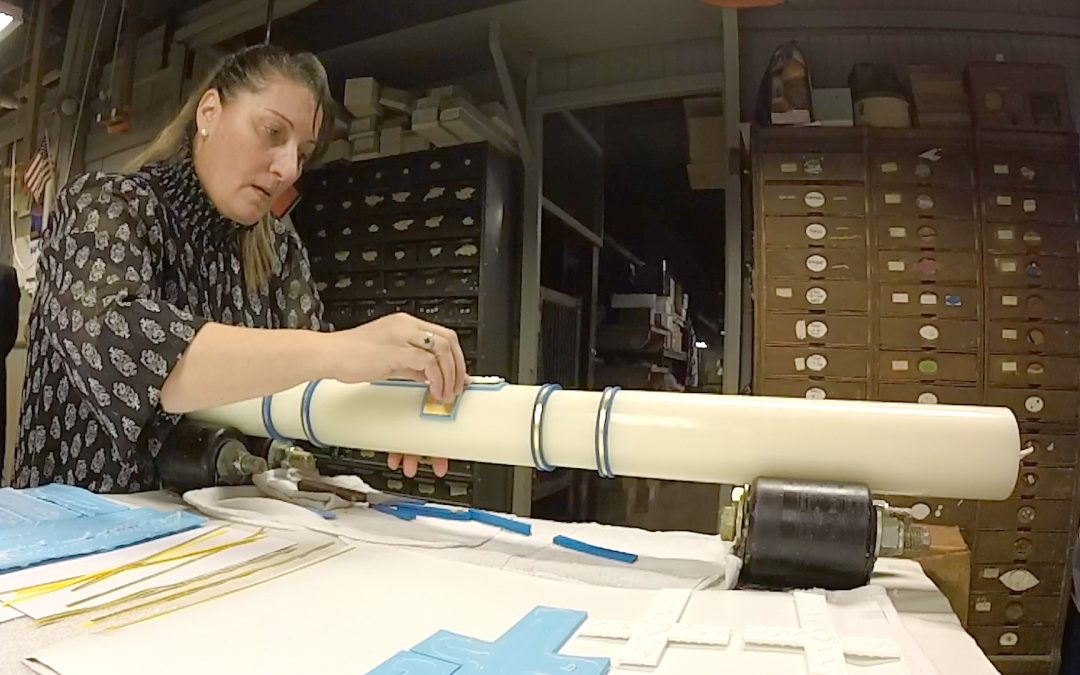 The church is dark and the congregation watches, keeping vigil, awaiting the resurrection of the Lord. Then, a single flame illuminates the darkness: the paschal candle, “the symbol of the light of Christ, rising in glory, scattering the darkness of our hearts and minds” (United States Conference of Catholic Bishops).

Each year in every parish, a new paschal candle is prepared, blessed, and lit from a blazing fire during the Easter Vigil. Brought by procession into the church, it burns at all liturgical celebrations throughout the 50 days of Easter and during baptisms and funerals throughout the following year. Tall and adorned with meaningful symbols, the paschal candle conveys “the truth that Christ is the light of the world” (USCCB).

In churches across the U.S., Canada, and beyond — including the Pontifical North American College in Rome, the Basilica of the National Shrine of the Immaculate Conception in Washington, St. Patrick’s Cathedral in New York City, and the Cathedral of the Immaculate Conception in the heart of this diocese — those paschal candles hail from Syracuse, according to Mark F. Steigerwald.

Cathedral Candle Company, where Steigerwald serves as vice president, has been crafting liturgical and devotional candles on Syracuse’s North side for 120 years, staying true to the vision of its founder, Bavarian candlemaker Jacob Steigerwald.

Today, Jacob’s great-grandsons are at the helm: Louis J. Steigerwald III is the president; his brother Mark is the vice president; and cousin John Hogan is Director of Personnel. Louis’s son, L. John Steigerwald IV, represents the fifth generation as Marketing and Sales Representative.

“The product line is very much the same as it was back 120 years ago,” Steigerwald said. While some of the manufacturing processes have been mechanized and automated, the company still uses some of the original processes, and the raw materials remain the same, he noted.

This mixture of modern and traditional holds true for creating Cathedral’s paschal candles. Some special-order candles may be created by hand-dipping; the more standard sizes offered in the company’s various collections are created by a process called extrusion.

In this mechanical process, a beeswax blend is heated, then quickly cooled to form tiny, snow-like granules. Those granules are compressed under extremely high pressure around a wick. A long, uniform candle is then pushed from the extruder — like toothpaste from a tube, Steigerwald explained — and cut to the desired length.

The greater part of all paschal candles must be beeswax, Steigerwald noted, beeswax being a “symbolic substance, as a product of the virgin bee.”

A team of talented and meticulous artists decorates Cathedral’s paschal candles by hand. They create a variety of ornaments by pressing thin wax, colored or accented with 24-karat gold leafing, into bronze dies. Some of the dies, Steigerwald said, came from Germany and are 90 to 100 years old. The ornaments are then trimmed and applied by hand to the candles — no adhesive is needed for these ornaments because wax is tacky and self-adheres, Steigerwald explained. (Some heavier molded wax ornaments used on Cathedral’s Sculptwax® and EXIMIOUS® paschal candles are applied with a wax-based paste developed by the company, he noted.)

Cathedral offers a wide variety of designs, but there are commonalities: “The critical ornamentation on a paschal candle is the presence of a cross; the Alpha and Omega; the date, because a new one [candle] is to be blessed each year; and then the five wounds of Christ, which are represented by the five incense nails which are placed in the candle as part of its blessing ceremony,” Steigerwald said.

It takes many sets of hands to create, decorate, and ship each candle. To meet the demand from its customers, Cathedral begins production on its paschal candles right after Easter each year, Steigerwald said.

Carrying on the tradition of his Church and his family is meaningful to Steigerwald. “It’s something we grew up with as children, and as you grow up with it and become more faithful … you realize the importance and the value of appropriate and quality liturgical appointments,” said Steigerwald, a parishioner of Immaculate Conception Church in Fayetteville. “It doesn’t build your faith, but it adds to it.”

“It’s an honor to be able to work in that and work hard at that,” he added.

See photos and video from Syracuse Catholic Television below. 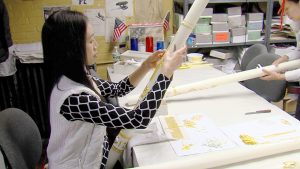 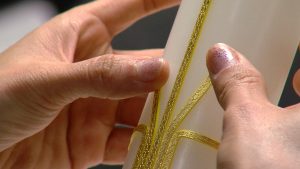 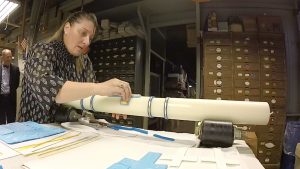