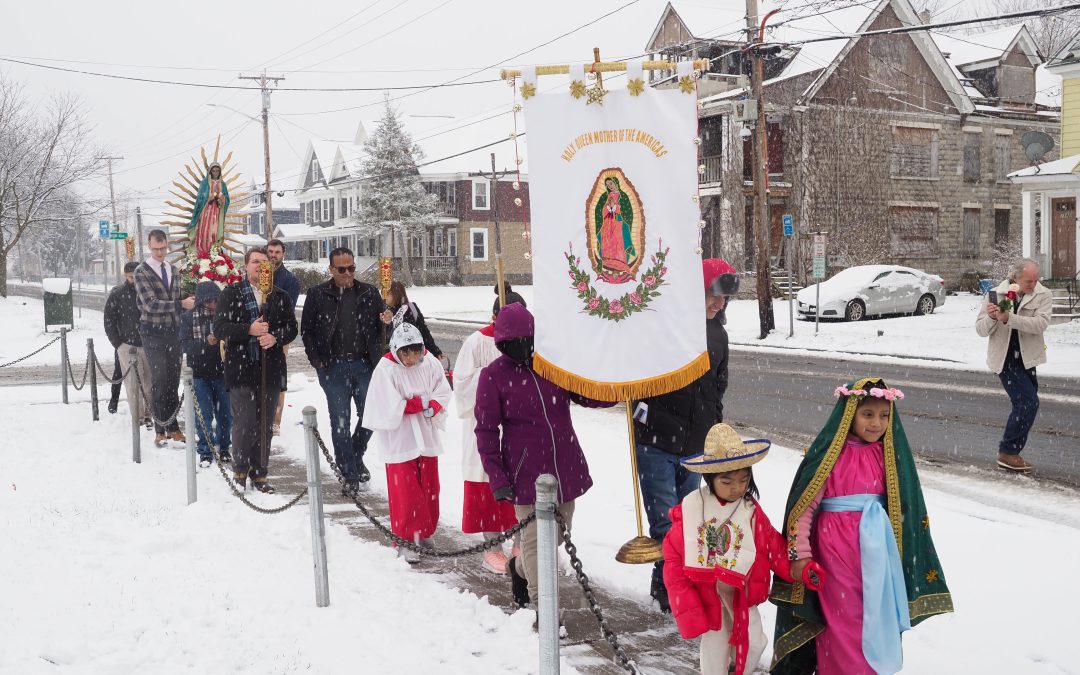 The procession banner reads “Holy Queen Mother of the Americas,” even though the feast celebrated is most often associated with just the Hispanic community in Central New York and beyond. The story of Our Lady of Guadalupe is rooted in apparitions to Juan Diego in Mexico in December of 1531, but the message is intended for all. 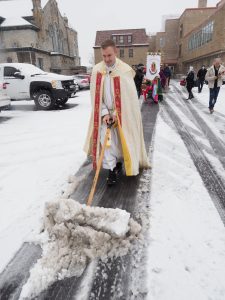 Father Brendan Foley clears a path for the procession.

“The Church recognizes that Our Lady of Guadalupe is the patroness of the Americas,  (it’s) not just a Mexican celebration, this is really a celebration for our whole continent,” explains Father Brendan Foley. The feast is celebrated on Dec. 12, but Father took advantage of the Sunday Spanish Mass at St Anthony of Padua in Syracuse and the growing congregation present there to celebrate one day early this year.

It’s a celebration that moves from Mass in the church to the streets in the parish neighborhood.

“There’s something special about this community,” adds Fr. Brendan. “They care deeply about their parish community. Many of them are teachers at local schools in the area. A lot of people have roots in the surrounding parts of Syracuse. And you can tell that there’s definitely a sense of perseverance.”

That word also describes Father and Deacon Dave Sweenie who, among others, both devote time and talent to the diocesan Spanish Apostolate. They were both at the altar for the Mass and procession which serves as an invitation to the neighbors.

“One of the things they want to do is to communicate that there’s life here, and especially for Spanish speakers in our communities,” says Father. “They want to find and invite people to find a home with us.” And many have. Fr. Brendan says some Masses he celebrated when he arrived in the summer of 2021 had a dozen or so participants. Sunday’s Mass for the feast had about 120 in attendance. They average about 70 in the congregation for weekend liturgies, people coming from “near and far. We have a family that comes as far as from Marathon. There’s a couple from Fort Drum that drives down every weekend. That’s quite a commitment.”

Father is quick to mention that the growth in the congregation is all about the people involved. “Really, it’s the generosity of the community itself. It’s amazing.” 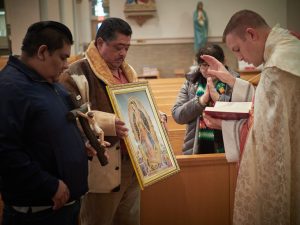 Father Brendan Foley blesses the image of Our Lady of Guadalupe.

To help spread the word about the work of the apostolate, they are launching a website this week, www.stanthonysyr.org and they can also be found on Instagram at stanthonysyr. Thus far, it’s been social media, but mostly word of mouth, that has built the apostolate, all guided by Our Lady.

“She is all of our Mother, and she is drawn to us for the sake of bringing us closer to her Son.”