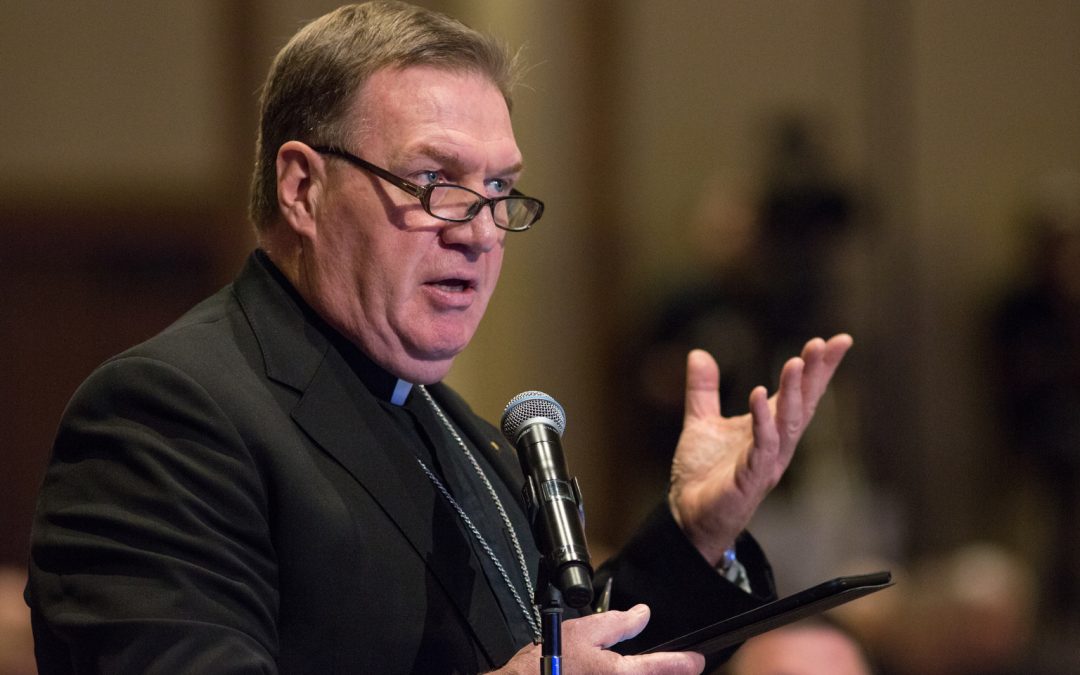 INDIANAPOLIS (CNS) — The two small children and their parents were exhausted as their plane landed in Indianapolis at 7:30 p.m. Dec. 7.

These were not the average tired travelers coming home from a tourist trip. This was a family arriving to their new home, ready to start a new life in a new country.

This was a family of refugees, leaving behind all they owned in war-ravaged Syria, ready to finally settle in the United States after a three-year wait to be welcomed.

Flor Bickel, senior immigration consultant for the Indianapolis Archdiocese’s Refugee and Immigrant Services, assisted the family at the airport.

“They were so tired, and the children were sleeping in their arms,” she told The Criterion, the archdiocesan newspaper. “But there was so much hope in their eyes.”

Heidi Smith, director of the archdiocesan refugee services agency, said it was a “happy reunion” with the mother’s sister and the sister’s family, who live in Indianapolis.

The family’s journey has been a long one. Fleeing their home in Syria three years ago due to violence, they have been living in transitional housing in Amman, Jordan.

After two years of extensive security checks and personal interviews by the U.S. government, the family was approved to come to America.

Because of the family’s relatives in Indianapolis, the archdiocese was asked to help resettle the Syrian family through its regular participation in a program that is a public-private partnership between the federal government and the U.S. Conference of Catholic Bishops and its Migration and Refugee Services.

Then, Indiana Gov. Mike Pence Nov. 16 announced that he would suspend the resettlement of Syrian refugees in the state.

On Dec. 2, Indianapolis Archbishop Joseph W. Tobin met with the governor to discuss the family’s plight, to reassure him that they had gone through an extensive background check, and to explain the archdiocese’s refugee resettlement process.

A news release was distributed to the media by the archdiocese Dec. 8 announcing that the family had safely arrived the night before.

“I thank Governor Pence for meeting with me last Wednesday, when I was able to explain in some detail the plight of this family as well as the role of the Archdiocese’s Refugee and Immigrant Services program in welcoming them to Indianapolis, where the family already has some relatives,” the archbishop stated in the press release.

“I listened to the governor’s concerns regarding security and prayerfully considered his request that we defer from welcoming them until Congress had approved new legislation regarding immigrants and refugees,” he added.

“I informed the governor prior to the family’s arrival that I had asked the staff of Catholic Charities to receive this husband, wife and their two small children as planned,” Archbishop Tobin said.

Soon after the archdiocesan news release was distributed, the governor’s office issued a statement that, while the governor “holds Catholic Charities in the highest regard,” he “respectfully disagrees with their decision to place a Syrian refugee family in Indiana at this time.”

On Dec. 8, Pence said at a news conference he would not block the refugee family from receiving state aid such as food stamps and health care, though he told the media he continues to oppose the family’s relocation to Indiana.

David Bethuram, director of Catholic Charities Indianapolis, said his office has received numerous calls of support for the resettlement of the family — from offers of living space to offers of financial assistance, and even “calls just saying ‘we support what you’re doing.’

“It’s given us a good opportunity to explain to people the process of refugee resettlement, this avenue of the church to welcome [refugees],” he said. “We’ve done it for 40 years, and will continue to do it.”

While there are no other Syrian families slated for resettlement in the archdiocese, Bethuram pointed out that Syrians “are not the only population we’re resettling right now. We have lots of others from Burma, Bhutanese (from Nepal), Africa — all of them have gone through the same process this Syrian family has gone through.”

Per this process, the Syrian family will be placed in an apartment furnished with donated items. The archdiocese’s Refugee and Immigrant Services will assist the family in registering for medical, welfare and Social Security aid, followed by help in transitioning to their new life in America. They will receive community and cultural orientation, English classes, tutoring, job readiness courses, professional certifications and employment placement.

The family arrived in the archdiocese on the eve of the beginning of the Jubilee Year of Mercy, and also in the midst of Advent, as Archbishop Tobin noted.

“We welcome this family during Advent, a time when the Christian community asks God to renew our hope and recognize God’s saving power among us,” he said. “As we wait with hope during this season of Advent, I ask all people of good will to pray for peace in our homes, local communities and throughout the world.”

Hoefer is a reporter at The Criterion, newspaper of the Archdiocese of Indianapolis.