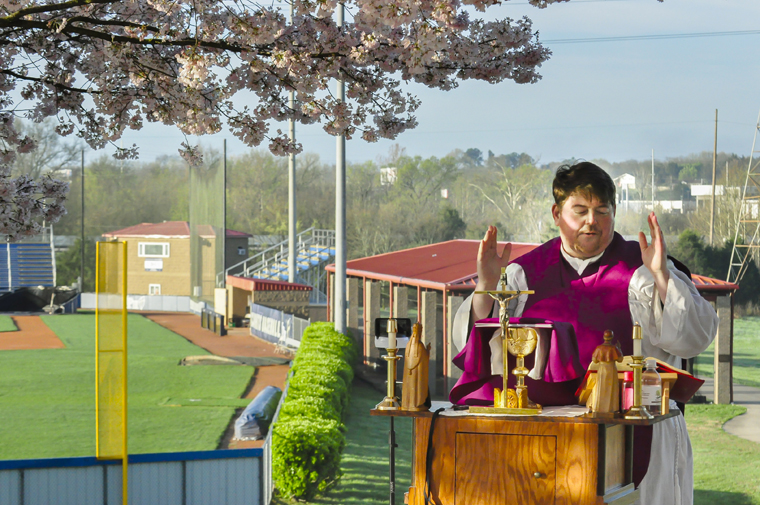 HENDERSONVILLE, Tenn. (CNS) — Under blue skies and a canopy of blossoming cherry trees in the parking lot of Pope John Paul II High School in Hendersonville, Father Andrew Forsythe set up his portable altar and cameras to record a private Mass March 26.

He was saying the Mass for the students while they are confined to their homes because of the COVID-19 pandemic.

“Mass is the highest form of prayer,” said Father Forsythe, who is the chaplain and a theology teacher at the Catholic high school. “It’s our lifeline. It’s where community comes from.”

“We’ve been talking about how to maintain community” while the school is closed because of the pandemic, he said. “We make community like we always have, through Christ, through his church.”

Father Forsythe began celebrating a private Mass daily for the school community from what he calls his mobile chapel in the parking lot of the school to record his celebration of a private Mass March 23, the first day the high school started online classes. He celebrates the Masses at 7:30 a.m.

“I’m trying to get here before school starts,” he told the Tennessee Register, newspaper of the Diocese of Nashville.

The Masses are livestreamed on his Facebook page — Frandrew Forsythe — and posted on the school’s website:www.jp2hs.org.

The building is locked, so Father Forsythe decided to celebrate Mass in the parking lot.

Bishop J. Mark Spalding of Nashville suspended the public celebration of Mass to help prevent the spread of the COVID-19 virus but encouraged the priests of the diocese to celebrate private Masses and make them available online.

Father Forsythe has celebrated private Masses with no one else present before, so it’s not a completely novel thing for him. Although, there is a touch of sadness attached to the current situation, he said.

“We’re not priests for ourselves,” he said. “To be apart saddens us.”

But sharing the private Masses online can help maintain a sense of community among the faithful, he said.

“The Eucharist is the glue that binds us,” Father Forsythe said. “Whether there’s one person or a million.”

The Holy Trinity is the ultimate community, the priest said. “From that relationship stems everything else. Bringing God and the angels and saints to this place is the way to connect that true community with ours.”

Father Forsythe made the portable altar he uses when he started woodworking as a seminarian at the Pontifical College Josephinum in Columbus, Ohio.

“I took to it and started carving,” he said. “I watched some videos and bought some cheap carving tools.”

Part of the altar is made with walnut that his brother, a lumber inspector in a sawmill, gave him, and the rest was salvaged from the old library at the Josephinum.

On the front of the altar, Father Forsythe carved the image of the Lamb of the Resurrection.

Inlaid on the top of the altar is a relic of St. Teresa of Kolkata, and when he sets up for Mass, on either side of the crucifix, he places statues of St. Pius IX and St. Charles Borromeo, who was venerated in his lifetime for his compassion for the people of Milan, Italy, where he was archbishop, during a time of famine and plague.

He built the altar because he knew there would be times he would be celebrating Mass outdoors. Father Forsythe built it to be the right size for him if he placed it on a picnic table, he said.

Since he started celebrating Mass outdoors at Pope John Paul II High School, Father Forsythe has had to contend with the elements. His fingers became numb with cold on one day, he said. “It rained on me the other day.”

“But you don’t have anybody criticizing your homilies though, and I’ve never taken up a collection,” he said with a laugh.