‘That was Jonesie’: Beloved priest was gentle, unassuming 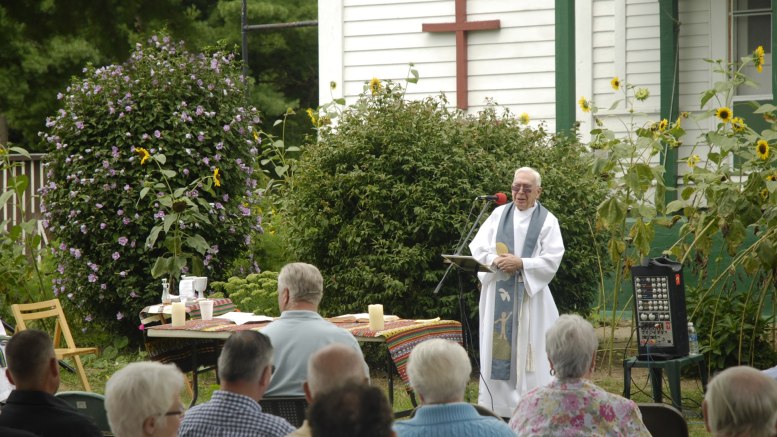 “I would go to the hospital to see somebody that was in my parish,” said longtime friend Father R. Paul Mathis, “and he had already been there.”

Father Jones, 83, died July 22. Since 1992, he had served as the chaplain at Unity Acres, a house of hospitality in Orwell for men who are homeless. His funeral Mass on July 25 at Sacred Heart Chapel at Unity Acres was packed.

All of the Beatitudes defined Father Jones, said Father Mathis. They met in 1978 at St. Rose of Lima Church in North Syracuse. His buddy, he said, was gentle, meek, humble, nonviolent, and unassuming. “Where was his power?” he said. “His power was in the people he served.”

Father Jones would have known Isaiah’s text backwards and forwards, Father Mathis said, and he exemplified the scriptural message that love doesn’t put on airs and it never ends — “that was Jonesie.”

Another applicable passage, the homilist said, is 1 Corinthians 2: “‘What eye has not seen, and ear has not heard, and what has not entered the human heart, what God has prepared for those who love him.’”

Two things helped Father Jones live out the Scriptures, Father Mathis said: celebrating the Eucharist and saying the breviary every day. And he “always saw the very best in every single person he met.”

He added: “He had great love for the poor and the people that nobody would listen to, especially the people here at Unity Acres.”

A man named Jim, of Fulton, was a resident of Unity Acres years ago when he was going through some tough times. Jim used to be an altar boy, so he helped Father Jones, his mentor, with Mass on Sundays.

Jim recalled Father Jones telling him: “Jim, try to move on, get better. … [There are] other things out there. … You’re so young yet. … I’m always here for you.” Even after Jim left Unity Acres about two years ago, Father Jones checked to make sure that he was OK. “Father Jones helped me a lot,” he said.

Unity Acres, a former tuberculosis sanitarium on several acres in Oswego County, was founded in 1969 by Father Raymond McVey and Kate Stanton as an alternative residence for men. Stephen Dickhout, the director, said Father Jones appreciated the Unity Acres residents who helped renovate Sacred Heart Chapel. Pews were taken out and stripped, walls were painted, the floor was replaced, and eventually new windows were put in.

The chaplain’s key qualities, Dickhout said, were “joy, simplicity, openness, meeting people where they are at, not necessarily imposing an idea of where the guy ought to be.”

Father Jones had a room at Unity Acres — a modern window, bed, desk, and bathroom — and his door was always open for counseling. On the day of his funeral, his straw hat rested on his bed, and at least one Bible was nearby. Toward his later years, when he was limited with his mobility, a resident would come over and assist him. Father Jones’ ability to draw out other people’s sense of caring was a gift in itself, Dickhout said. The chaplain was “always seeing the hopeful, joyful side of things.”

Another staffer, Peg McCarthy, whose son Jim played the guitar and sang for the funeral Mass, cited Father Jones’ humility. She said, “We just were very close friends through all of this. … He was a people’s person.”

Maureen Anderson, of Syracuse, said it was Peg McCarthy who dubbed one of Father Jones’ last days a “miracle day.”

Less than two weeks before he died, Maureen, her husband, Doug, Peg, and Father Jones’ niece Amy Jones visited Father Jones at The Manor at Seneca Hill, a nursing facility in Fulton.

“It was a miracle day,” Maureen said, “in that with Peg’s encouragement he was able to walk with assist, share comments, ask questions, simply, of course, and was joy filled. We not only met him inside the building, but outside where he donned his straw hat and sunglasses, and people he knew came up to him to greet him and he was always very friendly and spirited in his response.”

Doug Anderson said that the constant rain during Father Jones’ funeral represented the tears of the Unity Acres men who will miss him, but also the tears of joy in heaven.

Pasinski noted Father Jones’ “wry humor, his deep spirituality, and his attentive listening and seeking to affirm others. His sense of ministry was a deep commitment to the men who struggled and in great admiration of his old friend and UA founder, Father Ray McVey.”

Father Jones had shown his humor way back in the seminary, when for one of his papers he assumed the alter ego of “Dr. Throckmorton Photius Gooch.” He got a B+.

The niece, Amy Jones, was hospitalized and could not attend her uncle’s funeral. Her comments were read to the congregation by Maureen Anderson.

“A great man has fallen,” she wrote. “Not in battle but as a warrior for peace. Not with material wealth but with wealth of a far greater kind. Not with political power but with the never-dimmed radiance of Christ about him.”

Earlier in his vocation Father Jones worked at various parishes, and his niece noted that he helped found the former Elizabeth House, which housed “some very sweet people with various disabilities.”

As a youth, Father Jones set up things in his house and “said Mass.” Amy said: “Dad [Bill Jones] told me, ‘You know, there was no play about that one “game” as a boy. He always meant it.’”

Amy further recalled: “He said the funeral Mass for both my late parents and my late aunt, his sister Betty, and his rich, gently rolling voice did not waver even with heartbreak beyond the power of words to describe.”

She concluded: “The beauty of the good works and his Faith shine on. He has created a Legacy. Uncle Bob: he is with Christ now.”

His legacy includes some of his favorite advice derived from Scripture, quoted by Father Mathis:

“Never yield to evil. Practice good, and you will have an everlasting life.”