‘The light of Christ will win’: Pastors offer encouragement during virtual Masses 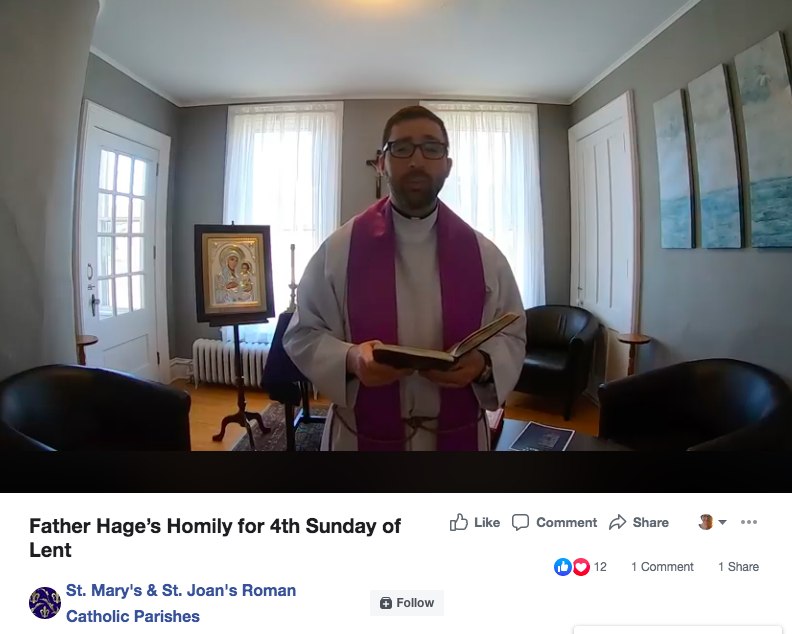 Father Jason Hage, pastor of St. Mary in Hamilton and St. Joan of Arc in Morrisville, delivers his homily via the parish Facebook page March 22. (Screenshot from www.facebook.com/StMarysStJoans)

“We gather in a different way, expressing ourselves as God’s people who have been redeemed by the blood of Christ,” Father Joseph Clemente, pastor of St. Marianne Cope parish in Solvay said March 22 during a 40-minute Mass on the parish’s YouTube channel posted on website and Facebook page. “I invite you to continue to pray with me as we celebrate the mysteries of faith, as we communicate those mysteries in a different way, but in a way that keeps us together as God’s people.”

Readings for the fourth Sunday of Lent came from 1 Samuel chapter 16, Ephesians 5, and the Gospel of John Chapter 9, which tells of Jesus’ miraculous healing of a blind man.

Bishop Lucia announced March 20 that all Masses in the seven-county diocese, including Holy Week and Easter services, are suspended. A week earlier, he had dispensed worshipers from the obligation of Sunday Mass.

New York State Gov. Andrew Cuomo on March 20 announced additional policies aimed at stopping the spread of the coronavirus. Cuomo’s “PAUSE” order requires all New Yorkers to stay indoors as much as possible, banned all gatherings, and ordered all nonessential businesses to keep all workers home, effective 8 p.m. March 22.

In his homily, Father Clemente referred to the global health crisis that is rapidly changing routines. “Certainly we are living in confusing times. We have more questions than anyone can ask right now,” he said. “We also have faith. Our faith tells us that God is more powerful than all the confusion, all the symptoms of evil in the world, that God will help us, that God will strengthen us as we experience this persecution.”

More than 500 people had viewed Father Clemente’s Mass by 2 p.m.

Early in a video of his Sunday homily, Msgr. Neal Quartier, rector of the Cathedral of the Immaculate Conception in Syracuse, noted the medical personnel risking their health to help others. “We need to thank them by staying at home,” he said.

“Let’s pray for solidarity with one another,” he said. “We certainly don’t understand why this horrible pandemic has overwhelmed our world, but we are called to trust our God at a time we are tempted not to.”

“We must not let the darkness of this pandemic overwhelm us, but use this time as an opportunity to reach out in love, to reach out in compassion, to reach out in caring, to all those around us,” Msgr. Quartier said. He urged people “to use it as a time to break down all our anger, our resentments, to heal all the divisions that have overwhelmed us. We are each called to bring light into the world even if we are stuck at home.”

Amid uncertainty and fear, believers are called “to surrender to a God whose ways are not our ways, but who is our shepherd, who calls each one of us to bring light into this world and promises that the darkness will not win out. The light of Christ will win out.”

Msgr. Quartier noted that human beings have been tested by war, depressions, epidemics, famine, and other hardships. “They were able to steady their hearts and care for one another. We can also do this,” he said.

He mentioned the World War II slogan, “Keep calm and carry on.” The sentiment “resulted in courageous and committed citizens around the whole world believing that their ordeal would end and that life would go on. It took time. It took patience. It took sacrifice. But life and light won out.”

He urged believers to “reach into the best part of ourselves to stay calm, to carry on, realizing that this too shall pass.”

Father Jason Hage offered Mass in a small chapel set up in what is usually the parlor of the rectory at St. Mary’s in Hamilton. The Mass was streamed live on the parish Facebook page, with more than 420 people tuning in to watch, Father Hage said.

He delivered his homily twice on Sunday — once during the celebration of Mass and once in a video recorded after he discovered the live feed had cut out during the Mass.

“I feel like God has a wonderful sense of humor, cutting the feed in the middle of my homily,” he joked.

Father Hage’s homily reflected on the man in the Gospel reading who gained both physical and spiritual sight. “It got me thinking about what I haven’t been seeing, before this pandemic hit,” he said, noting taking things for granted and often just going through the motions of life and routine. “And now all these things have seemingly been taken away from us — all these things we’ve leaned on for comfort, for encouragement, for support, they’ve all been stripped away.”

He urged listeners to surrender to God in this moment. “I want to encourage you to just be with it, to be with this time. To let God in. To let your defense mechanisms fall, and to just — in this time of silence, and this time of pause and retreat — just let God break into your hearts.”

Father Hage is working hard to minister in new ways during the pandemic. When public Masses were suspended, he realized “everything has changed… It hit me so hard: I have to do everything I can to reach out [to parishioners] and to stay connected.”

In addition to livestreaming the 11 a.m. Sunday Mass, Father Hage is streaming 8 a.m. daily Mass Monday through Friday. He’ll also be offering Faith Formation lessons for children at 11:30 a.m. on Tuesdays and an online Lenten adult Faith Formation series on Wednesdays at 7 p.m. He’s also asking the parish family to pray the rosary at 7 p.m. on Thursdays and pray the Stations of the Cross at 3 p.m. on Fridays.

Father Hage had some 150 people tune in for his first livestreamed daily Mass last week, and the response to the first emailed bulletin was huge, he said. On Friday he sent another note to parishioners about the cancellation of public Holy Week and Easter Masses. He acknowledged their shared sadness but ensured the community that “there are ways we can still be parish, we can still be Church; maybe this is pushing us to think outside the box and think of ways of doing ministry and even prayer from the home that maybe we should have been doing all along.”

As exciting as these new modes of ministry are, however, not seeing people at Mass on Sunday was difficult. “I was grieving. It’s heartbreaking,” Father Hage said. “For a priest it’s his lifeblood to be able to connect to the people, especially at Sunday Masses. It’s our entire life. Every Sunday is like our Super Bowl where we get to join in this amazing moment with everybody in the community.”

“It really is like a Lenten fast,” he said. “For me as a priest, that is something that I’m already longing for — the day when we can celebrate Mass here again. And I can only imagine what that celebration is going to look like.”