‘There was no phoniness about him, no pretense’ 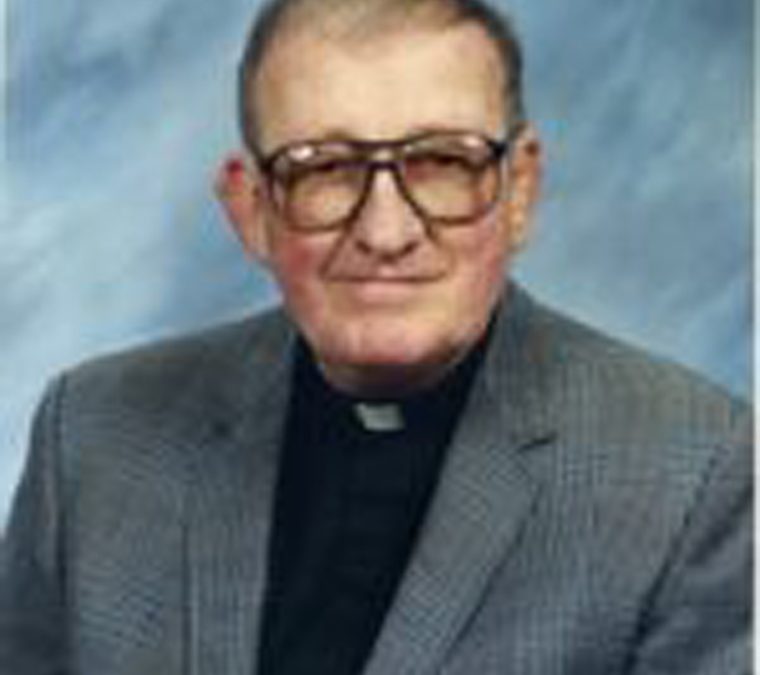 There was no baloney about him. Need some cash? Here’s a twenty. Come to his door hungry? That’s why he cooked 15 pounds of chicken thighs. Shivering under the bridge? Here’s a blanket.

“Father Tony Keeffe — a Vatican II priest through and through,” said his longtime buddy Father Frederick D. Daley, who also noted that his friend was upfront about his childhood nickname of  “Tony Baloney.”

“He was a regular guy,” said his niece Amy LaMirande.

“I could see the joy in him,” said longtime friend Donna Scheuer.

“And now we have another saint for us,” said longtime friend Richard Keough.

Father Anthony J. Keeffe, 87, who grew up on the North Side of Syracuse, died Feb. 26 at St. Joseph’s Hospital in Syracuse of complications of COVID-19, said Father Daley. Father Keeffe had a lot of underlying health issues too, LaMirande said.

“The seeds of his vocation were planted in his very loving Catholic family on Oak Street, nourished at Assumption High School and Le Moyne College,” Father Daley said in his homily at the livestreamed funeral Mass on March 4 at St. Lucy Church in Syracuse.

The first reading was Ecclesiastes 3:1-8 (“There is an appointed time for everything, and a time for every affair under the heavens”), proclaimed by longtime friend Bill Kinne.

The second was 2 Timothy 4:6-8 (“I have competed well; I have finished the race; I have kept the faith”), proclaimed by Evelyn Stelmashuck, who was Father Keeffe’s secretary when he ministered at St. Anne/St. Patrick in Parish/Williamstown.

The Gospel was Matthew 25:31-40 (“‘For I was hungry and you gave me food, I was thirsty and you gave me drink, a stranger and you welcomed me, naked and you clothed me, ill and you cared for me, in prison and you visited me’”), proclaimed by Father Daley.

A believer in Unity Acres

Father Keeffe was born April 1, 1933. He attended Christ the King Seminary and was ordained on May 18, 1963. He ministered in parishes in Syracuse, Liverpool, Utica, Pulaski, Lacona, and Parish/Williamstown. He often helped Father Ray McVey, the late priest who worked at Unity Acres, a house of hospitality in Orwell for men who are homeless.

Asked why her Uncle Tony was drawn to help people at Unity Acres and others, LaMirande said:

“I think because he just was a down to earth guy and he saw that these people needed help. … He would go a lot in the wintertime. I was with him one time when there was a bunch of homeless men under the bridge down by the West End [of Syracuse]; and he had a bunch of blankets and warm gloves, socks, and he would go down there and give them to them, so that they could keep warm. He just was that type of guy. He just always went for the underdogs.”

LaMirande is one of the caregivers for her mother, Ann LaMirande, 96, who is Uncle Tony’s sister. “Tony was lucky to have a niece like Amy,” Kinne told the congregation.

Other survivors are Father Keeffe’s sister Joan B. Keeffe; nieces Peggy Megrdichian and Leann Bulner; and nephews Mark LaMirande and Gary Lucia. Father Keeffe was predeceased by his brothers, Francis J. and Joey, and his sister Mary.

Asked if her priest-uncle had a profound effect on her, Amy said, “I think he did on all of us kids. ’Cause he was an uncle. He played baseball with my brothers, they went fishing, they did normal stuff.”

Father Keeffe never swerved from his path. “In 1972,” Kinne said, “Father Tony piled him and five other people in the car and drove to California — without stopping.”

Father Keeffe retired in 2003. “How blessed Tony was in his last years, especially the last couple years of his struggles with his variety of illness, to be surrounded by such a circle of love,” Father Daley said. “His sister Joan. Joan, Tony loved you and protected you, and what a gift you were to him. He would have been all alone in his house these last 18 years of retirement if it weren’t for you; and how blessed Tony was with you. And Amy, right there.” Father Daley also thanked all of Father Keeffe’s friends — “everybody in this church.”

On Feb. 24, Father Daley put on “all the protective gear, looking like someone arriving from outer space,” and visited Father Keeffe’s room at St. Joseph’s Hospital.

What to do in life?

After the future Father Keeffe was drafted into the army, Father Daley said, he “struggled with the issue of love and peace and violence and what to do with his life. ‘Brother Jesus,’ as Tony would describe his friend, convinced him to give the seminary a try.”

The vision of Pope John XXIII, Father Daley said, “became the vision, challenge, and fruits of Father Tony’s 58 years of ministry.” That vision included awareness of the world’s problems and a keen desire to help.

Father Daley shared a story he heard from Father Keeffe’s good friend Keough, who would “take Tony for a ride and Tony would be sure he had some $10s and $20s in his wallet. Tony couldn’t go by a person on the corner without handing them a bill.

“Meg Ksander [Pastoral Associate at All Saints] and others would go shopping for Tony’s very specific list: 15 pounds of chicken thighs would be gone two days later — where did they go? Well, folks coming to the door needed food; in his later years his ministry to the poor was at his front door.”

Father Daley recalled hearing Father Keeffe’s former secretary Stelmashuck say that “Tony would go to wakes and funerals of everybody in town no matter what their religion. He was all about people.”

“Tony admired Father Ray McVey,” she said, “and the mission at Unity Acres. … He was frequently there to help Ray in any way that he could. For most of us familiar with the Acres, the residents were always referred to as the ‘Men at the Acres.’ Not so with Tony. For him they were his brothers. He liked to hang out with them, brothers he truly loved. That is notable!

“If you read Tony’s obituary you saw that he wished to be buried with his brothers in Christ in the St. Martin de Porres Cemetery on the grounds of Unity Acres. … I’m sure that we who knew him, knew of his love for the disenfranchised. He did everything he could to relieve their suffering and did it in spades right up to the last few weeks before he died. Thank you, Tony, for the example you leave us.”

A disarming warmth and humor

Unity Acres Board Member Dave Pasinski said, “Tony, as everyone has said, exemplified that sense of humility, of accepting people where they were, loving people as they are, and being able to communicate that with a warmth and a humor that was often disarming in my life.

“He had a little chuckle; as you know, he had a glint in his eye at times. … He was self-effacing. There was no phoniness about him, no pretense, no clerical privilege, no sense of anything except another person who cared about you, and tried to follow Christ and live in the community.”

“Great sense of humor, great commitment to the poor,” remembered longtime friend William Cuddy, who is retired from jail ministry at the Onondaga County Justice Center.

He added: “He just had a heart for people marginalized. So he did a lot at Unity Acres over the years, and he would visit prisons.”

“We come to thank you, Tony, for reaching many thousands of people with Christ’s love,” said friend Keough, reading the Prayer of the Faithful.

Years ago Father Keeffe welcomed Scheuer, who now lives in North Carolina, into the Catholic faith. She told the congregation: “I just want to share with you what a miracle Tony was in my life. … He was a saint. … Gave me my first Bible.”

Father Keeffe had encouraged her in becoming a nurse, and they still talked on the phone in the last few weeks. She said, “He prayed for other suffering people. … I loved him dearly and I’m gonna honor him by being a better person and being a good Catholic.”

Of all the testaments he has read in the files of deceased priests since he came to Syracuse 18 months ago, Bishop Lucia said, “Tony is the one that has moved me most.”

He read to the congregation quotes that other bishops had put in Father Keeffe’s file:

“‘Your love and compassion for the people of God has always been present. Those committed to your pastoral care have found in you a reflection of the Christ. Their spiritual lives have been nourished by your proclamation of the Word, enriched by your sacramental ministry, inspired by your example.’

“And then, more than one letter went on to talk about his caring for people living in poverty or isolation.

“But the phrase that really caught my attention, and I love this word — his ‘sensitivity for humanity.’”

He said one bishop wrote: “‘Ordination touched the very core of you, indelibly marked you, made you more Christlike, a reflection of Christ.’ And that same bishop went on to write about him being a ‘mediator of the mystery of God.’ Can you imagine being described that way? … What a beautiful testament.”

And one bishop wrote: “‘No confusion about your identity: In persona Christi [In the person of Christ].’”