Thoughts on a historic gathering 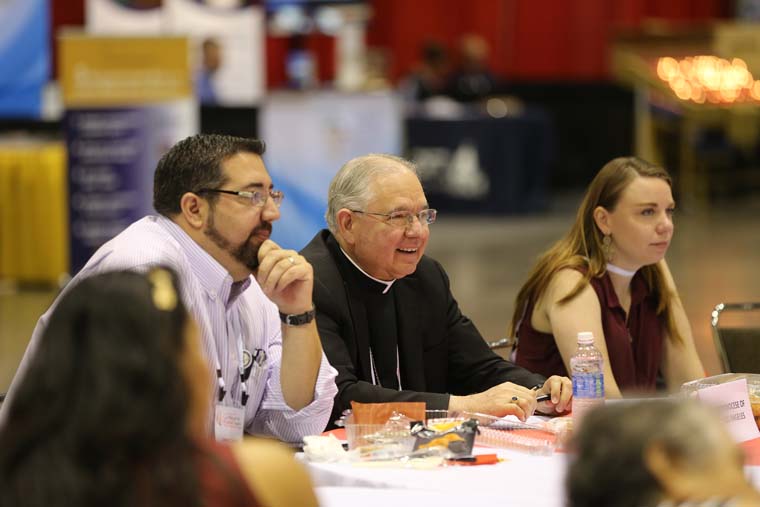 WASHINGTON (CNS) — The first century of the U.S. Conference of Catholic Bishops has concluded with its organization of an unprecedented and powerful gathering of Catholics in Orlando, Fla.

With the somewhat ungainly title of “Convocation of Catholic Leaders: The Joy of the Gospel in America,” it was nine years in the making. It brought together more than 3,100 people, mainly laity but also more than 150 bishops and 500 priests and deacons. It felt a bit like a class reunion for highly engaged Catholics, or as one observer put it, a World Youth Day for adults.

For four days of speeches, panels, Masses, and much conversation, the convocation became a tangible expression of church unity and missionary zeal. There were many highlights, from the opening speech by Hosffman Ospino to the closing homily by Cardinal Daniel N. DiNardo of Galveston-Houston, USCCB president.

A tour de force was the final address by Archbishop Christophe Pierre, the papal nuncio to the United States. He called the gathering “a new Catholic moment, a privileged time to be renewed for the mission of evangelization in this country.”

Weaving together references to nearly every plenary talk, the archbishop showed that he had not just attended every session, but had listened as well.

The nuncio called the convocation a “journeying together” that strengthened “our common bonds.”

“This convocation has reawakened our collective conscience to the plight of the poor, the persecuted, and those at the peripheries,” he concluded.

Los Angeles Archbishop Jose H. Gomez spoke at length about the peripheries in our society. “America is pulling apart,” he warned. “We are people divided along lines of money and race, education, and family backgrounds.”

For Archbishop Gomez, as for many other speakers, the challenges we face in society demand missionary discipleship, a going forth to evangelize anew. This means not just converting others, but first converting ourselves. “We know the church’s mission is not just a ‘job’ for bishops and clergy and ‘church professionals,’” he said.

“You are here today,” he told the attendees, “because you have heard the call of Jesus: ‘Follow me!’”

The speeches and liturgies were accompanied by dozens of breakout sessions featuring more than 239 panelists, each with bishop facilitators. The emphasis was more on dialogue than lectures. What was most evident, however, were the constant conversations taking place throughout the hotels and gathering spaces.

This may have been the greatest gift of the convocation: opportunities for highly committed Catholics from chanceries and parishes, from Catholic apostolates and organizations, to mingle, to share, and to realize they were not alone.

The convocation brought together people not just from pro-life and social justice areas of the church, but also people involved in education, evangelization, media and communications, liturgy, and youth and young adult ministries. In addition, there were those serving Hispanics, Asians, African-Americans, and other communities.

This cross-fertilization of ministries may have been one of the great opportunities of the convocation, a breaking apart of the silos that often impede the work of the church.

While there was a great sense of unity, the delegates were challenged to hear the voices of the poor and the marginalized: Ospino on the growth of Latino Catholicism, strong words from Ansel Augustine on the role of African-American Catholics, and much-applauded remarks by Helen Alvare and Kerry Weber on the role of women and the church.

Patrick Lencioni, a famous management guru and founder of Amazing Parish, brought his analysis of successful teambuilding to the convocation, wittily skewering the kind of “nice” behavior that lacks trust, avoids conflict, and ignores results in many church organizations. The knowing laughter and applause that accompanied many of his observations suggest where the church needs to get better.

So what next? That question was constantly asked. How does this energy get brought back to parishes and dioceses? The last day each of the 157 diocesan delegations huddled to propose their own answers to these questions at the personal, parish, and diocesan levels.

One less obvious takeaway, however, is that the convocation underscored the value of the U.S. bishops’ conference itself. The conference was born in 1917 as a response to the demands of World War I and the realization by the bishops that they needed a national organization with a national voice.

This convocation was the fruit of several years of work by USCCB staff and a bishops’ working group. It is impossible to imagine another organization with the resources, the skill sets and the knowledge to pull off such a gathering.

Perhaps one fruit of the convocation will be that church leaders see their conference not only as a bureaucracy, but as a phenomenal tool for engaging our entire church in its 21st-century mission.