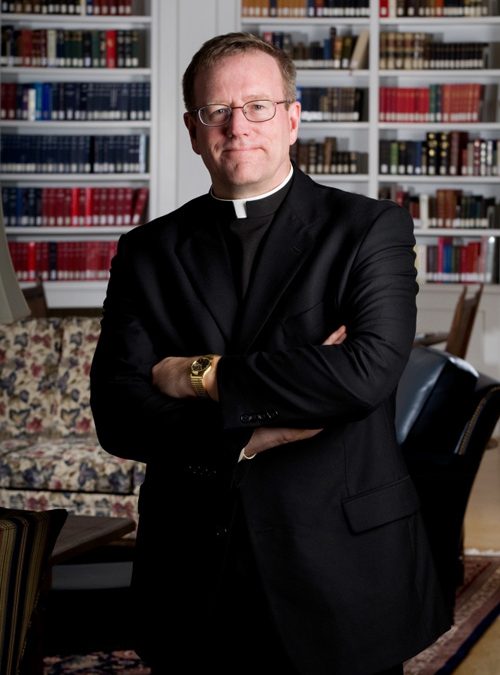 WASHINGTON (CNS) — Pope Francis has named three auxiliary bishops for the Archdiocese of Los Angeles and accepted the resignation of Auxiliary Bishop Gerald E. Wilkerson, 75.
The changes were announced July 21 in Washington by Archbishop Carlo Maria Vigano, apostolic nuncio to the United States.
The pope appointed two priests from Los Angeles and one from Chicago, the rector of Mundelein Seminary, to be auxiliary bishops.

Msgr. Joseph V. Brennan, 61, vicar general and moderator of the curia in Los Angeles since 2013, is a native of Van Nuys, California, whose studies and assignments have all been in the Southern California archdiocese.

Msgr. David G. O’Connell, 61, is a native of County Cork, Ireland, who studied at All Hallows College in Dublin before being ordained a priest of the Los Angeles Archdiocese in 1979. He has been pastor of St. Michael’s Parish in Los Angeles since 2003.

Father Robert Barron, 55, is a native of Chicago who has served as rector of Mundelein and president of the University of St. Mary of the Lake, also in Mundelein, Illinois, since 2012. He is founder of Word on Fire Catholic Ministries.

Bishop-designates Brennan, O’Connell and Barron are expected to be ordained bishops this fall, though no date has been set yet.

“I think it is clear that in appointing these new auxiliary bishops, Pope Francis really understands what the church needs — not just here in Los Angeles, but also in the United States and across the Americas,” Los Angeles Archbishop Jose H. Gomez said in a statement.

“I believe each of these new auxiliary bishops will help us in our mission here in the Archdiocese of Los Angeles — the beautiful mission we have of sharing the love of God and the message of Jesus Christ and promoting human dignity and mercy and justice in our society,” he said.

Los Angeles is the largest archdiocese in the country by population, with about 4.3 million Catholics.

“It was a complete surprise,” Bishop-designate Father Barron said about the appointment in an interview with The Tidings, newspaper of the Los Angeles Archdiocese.

The author of almost a dozen books and a weekly radio commentator, the priest founded the nonprofit Word on Fire in 2000. He is creator of the “Catholicism” television series and is a regular presence on YouTube and the Web giving a Catholic perspective on mainstream cultural events.

While he is a sought after speaker, he said his main responsibility will be to serve as auxiliary bishop.

“I have to be present to the people of the archdiocese,” he said.

The appointment came as a surprise to Bishop-designate Brennan as well.

“It was like a punch in the stomach,” he said. “I had an immediate gut reaction that my life was going to be very different. We make our plans, but God has other ideas.”

Bishop-designate Brennan, who identifies mostly with his ministry as a pastor, has brought that pastoral sense to his role as vicar general.

“It’s a laying down of your life on a daily basis,” he said. “I think this episcopacy will be the same.”

Bishop-designate Brennan said he, like Pope Francis, makes it a point to bring joy into his ministry.

“I try to bring a real sense of gratitude for the day,” he said. “Even in the midst of difficult decisions and the problems and situations that need to be dealt with, without being flippant, I try to be joyful. I try to bring some humor to it.”

Bishop-designate O’Connell, who has been serving in parishes in South L.A. for more than 25 years, has ministered to communities that have suffered through gang violence and drugs.

Bishop-designate O’Connell, who serves on the Archdiocesan Finance Council, works with community leaders and law enforcement on gang intervention efforts.

Contributing to this story was J.D. Long-Garcia in Los Angeles.