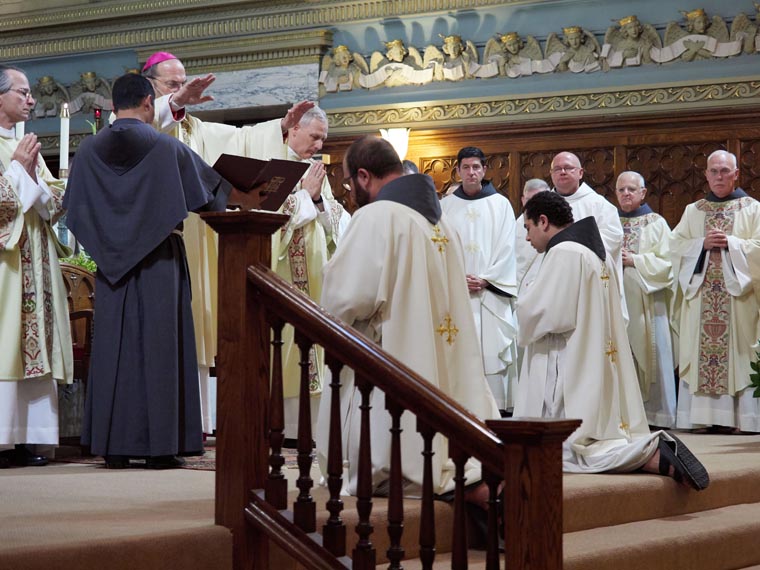 At the church’s entrance, a young Franciscan swung a censer, and the smoke flowed toward the nave — toward the Spirit — where hundreds had gathered and a two-hour ritual was about to unfold.

Friar Nader Nabil Ata, OFM Conv., in the foyer, poked his head toward the flow of the incense, and soon Father Joseph O’Connor, standing just inside the church, gave a short wave. It was time for Friar Nader and Friar Nicholas Carmelo Spano, OFM Conv., to lead the procession to the sanctuary, where they would be ordained as Franciscan priests.

Bishop Robert J. Cunningham presided over the ceremony Saturday at the Franciscan Church of the Assumption in Syracuse. The church filled with music, tears, hugs, applause, and flashbacks. Both new priests had lost their fathers, but Father James McCurry, OFM Conv., provincial of the Franciscans’ Our Lady of the Angels Province, assured the congregation that the priests’ dads had ringside seats in the heavenly mansion. Father McCurry honored the new priests’ mothers too, noting that the Blessed Virgin Mary was the mother of the first priest.

“For over 800 years, God has raised up priests in this brotherhood of friars,” Father McCurry said, drawing tremendous applause. “For over 150 of those 800 years, we’ve had friars here in Syracuse, at Assumption.”

Saturday’s ordinations were the first at Assumption in more than 25 years, he said, adding that he hoped the church was starting a new tradition. “Our Franciscan family has two gems,” he said of the new priests. 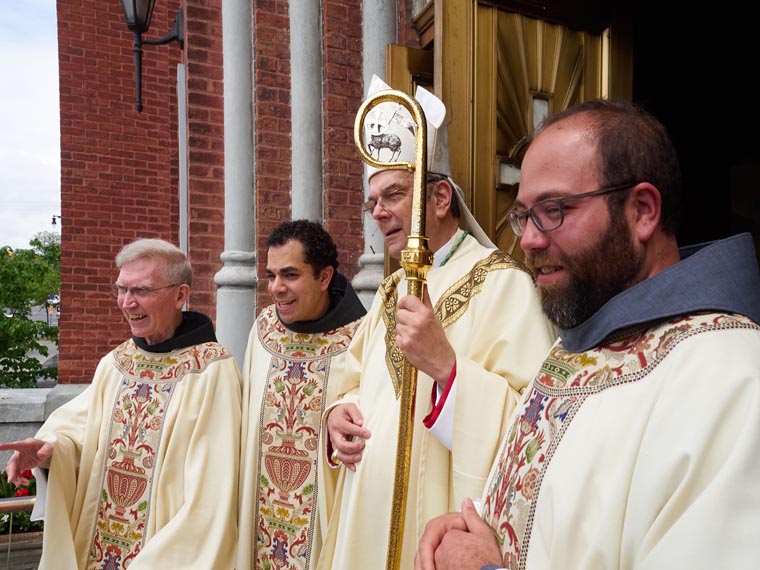 The Rite of Ordination began with the ordinands standing up and saying “Present.”

“I am delighted to be here today,” Bishop Cunningham told them. He said their hearts must burn with love for God, and he instructed them to open their hearts because “God has called you and has a plan for you.” He noted that the candidates had gone through a period of prayer, discernment, and study. “You freely hand yourselves over to God in this mission,” he said.

Remembering the words of Pope Francis, the bishop told the candidates that they must heal the brokenhearted,  remember their roots, and welcome sinners. “The priesthood must be the center of your life,” the bishop said, and the two new priests must engage in daily meditation on God’s word.

“Live joyfully; do not abandon yourself to sadness,” the bishop continued. He then called on the congregation to support the ordinands with prayers and love.

The candidates prostrated themselves before the bishop, and the assembly sang the “Litany of Supplication,” a melody in the key of A that includes the slowly-sung refrain “All you holy men and women, pray for us.” Serving as dual cantors were Friar Emanuel Vasconcelos, who is studying for the priesthood in Washington, D.C., and Lisa Andino, the wife of the organist, Tom Andino. Joining in were the choir, supported by timpani and two trumpets.

In turn, the bishop and all the priests laid their hands on each candidate’s head in an ancient gesture of the Church. Then Bishop Cunningham raised both hands over the ordinands and prayed the prayer of consecration.

Next the bishop anointed the palms of the newly ordained men with holy Chrism. After the bishop gave both priests the kiss of peace, all of the priests came forward and did the same. When Father Nader and Father Nick finally got to embrace each other, the congregation released a delighted little sound of satisfaction, and the new priests smiled back during a standing ovation.

Patiently waiting was Mary Beth Lanzillo, of Troy, who attended because she knows Father Nick’s family. “I thought it was great — this is the first ordination I’ve been to,” she said.

Her daughter, Katie Lanzillo, of Troy, grew up with Father Nick; their grandparents had camps on Babcock Lake in Rensselaer County. “He’s fun — he’s really funny too,” she said. She added: “The church is beautiful.”

Also attending from the eastern part of the state were Kevin Calacone and his family: his wife, Alison, and their children, Caroline, 4, John, 2, and Peter Nicholas, 2 months. They are from Albany.

“I’ve known Nick since the sixth grade,” Kevin said. “He’s been a wonderful friend. He’s actually godfather to my children. And I wanted to be here with him on his big day. Very special day for him and for the Church.”

Part of the powerful Franciscan presence in the church were Deacons John Falge and Philip Smolinski. They said they were having flashbacks to their own ordinations last year. During the “Litany of Supplication,” he could feel tears running down his face, Deacon John said.

“It was a beautiful ceremony,” he said. “Wonderful liturgy, as the bishop always does. It’s just great to see two new young energetic Franciscan priests.”

Deacon Philip stood next to the bishop during the Mass. Both new priests were “overpowered by the Spirit” and they both felt the presence of their fathers looking down on them from heaven, he said.

He said: “It makes me very proud to be a Franciscan, to see my brothers be lifted up to the Order of Presbyter and to serve alongside with so many of us in the pasture of Our Lord Jesus Christ. So, I’m very happy.”

After blessing well-wishers for about an hour, Father Nick said of the day, “It was like you were feeling everything all at once, which is why it was so overwhelming.” His mother, Elizabeth Spano, attended his ordination, along with relatives from Watertown; Albany; New York City; and Zurich, Switzerland.

He will now resume his ministry at San Damiano Mission at Holy Family Church in Greenpoint, Brooklyn.

In the days leading up to his ordination, Father Nader had said that people at Mass feel hope, love, and God’s mercy. Asked what extra emotions he was feeling after his ordination, he said:

“Oh, I would say an overabundance of love, mercy, and hope. There is so much joy in my heart. I’m so grateful for my vocation. … And though it may have taken a while to get here, I’m here because I try to stay faithful. So I’m grateful for that.”

Asked if anything in the ceremony surprised him, Father Nader said:

“I was surprised that I didn’t cry during most of it. I thought I was going to cry a lot more. I also didn’t expect my sister to cry. And so, when I saw her crying, it is a reminder to me that … it’s not just that they [family members] affect me, but I affect them. And that is something I may never always understand. But today I got a glimpse of it.”

He was referring to his sister, Nancy Lee. His younger brother, Alexander Ata, and his mother, Dr. Hadia Ata, also attended.

Father Nader will continue his ministry at Assumption. Asked what else he wanted to say to the Sun’s readers, he said:

“To know that just as much as we witness to you, you witness to us. And having the presence of so many parishioners here at the ordination is just as important as having my family, because they’re the people that I’m ordained to serve. And I’m grateful for their presence. I may not always say it, I may not always be able to verbalize it, but my ministry would be pointless without them. I’m called to serve the people of God.”

One of the last people whom Father Nader blessed before heading to the reception was Father Rick Riccioli, OFM Conv., the pastor of Assumption.

“It was like coming full circle,” Father Rick said of the blessing. “As a priest, I’d been ministering to him as my brother, and now he ministers to me as a priest. So it was a real fraternal moment.”