U.S. bishops’ meeting has echoes, and differences, from 2002 gathering 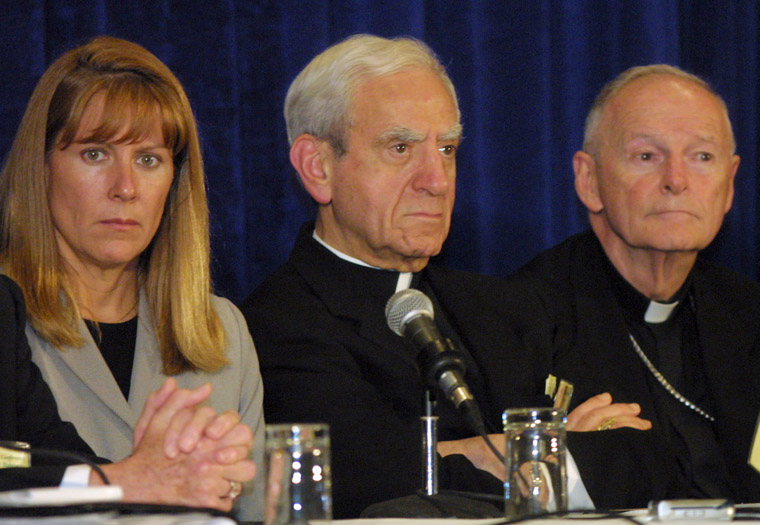 By Carol Zimmermann | Catholic News Service
BALTIMORE (CNS) — The gathering of U.S. bishops in Baltimore Nov. 12-14 on the heels of the clergy abuse scandal that hit the Catholic Church this past summer had echoes of the 2002 bishops’ meeting in Dallas, which took place just months after the church was also reeling from clergy sexual abuse crisis that made headlines in The Boston Globe.

But the two meetings reflected different times and also ended with different results.

Both meetings involved U.S. church leaders facing allegations of sexual misconduct and cover-up among their own ranks and the laity’s demands for action amid feelings of strong distrust of church hierarchy.

“They were starting from scratch” in 2002, said Jesuit Father Thomas Reese, a senior analyst at Religion News Service, about the bishops’ response then to sexual abuse charges in the church.

Standards the church still uses to protect children and deal with abusive priests were developed at that meeting, but the bishops at that time failed to address standards of episcopal accountability, which this year they discussed but didn’t vote on.

At the Dallas meeting, Father Reese, who was then the editor of America magazine, was a guest anchor at a CNN desk on site, which indicates the extent of news coverage for the June 13-15 meeting.

Both meetings were the bishops’ typical twice-yearly meetings as a body. The spring meeting of the U.S. Conference of Catholic Bishops is usually in June at different locations each year and the fall meeting in recent years has always been in Baltimore.

Both the Dallas and the Baltimore gatherings were almost entirely devoted to the church crisis, along with time for prayer, and both years abuse victims addressed the bishops.

Typically, media coverage of bishops’ meetings is pretty sparse. Last year, about 40 reporters attended the fall meeting in Baltimore. This year, the number jumped to 160, but many of these reporters left during the first day when it was announced at the meeting’s opening that the bishops would not be voting on responses to sexual abuse as planned.

Cardinal Daniel N. DiNardo of Galveston-Houston, USCCB president, informed the bishops Nov. 12 as they opened their fall general assembly that the Vatican wanted the bishops to delay any vote until after a February meeting with the pope and presidents of the bishops’ conferences around the world that will focus on addressing clergy abuse.

The Congregation for Bishops, which made the request, also said the delay was needed to better evaluate the proposals in light of canon law.

In 2002, media coverage was at a record high for a bishops’ meeting with 750 accredited journalists.

It also was the first time a version of livestreaming was made available, then called a “live Web cast” which was taken from the Eternal Word Television Network cable feed of the bishops’ meeting. Now the USCCB always provides livestreaming of public sessions of bishops’ meetings on its website.

The 2002 meeting, pre-social media, did not have live tweets during the meetings from reporters, observers and bishops.

This year, the USCCB’s social media accounts — Facebook, Twitter and Instagram — with postings about the Baltimore meeting had 42,100 responses and were seen by nearly 2 million. The USCCB also ran two Facebook Live events with bishops answering questions about the meeting.

Both meetings — with their focus on abuse — drew protesters including victims of abuse or those calling the bishops to do more about the crisis.

The 2002 meeting included protesters from Survivors Network of those Abused by Priests, or SNAP, Call to Action and Voice of the Faithful.

This year, members from SNAP and the research site BishopAccountability.org were outside the hotel where the bishops were meeting, holding signs in the cold. The groups’ leaders focus more on oversight and justice than controversial debates over the perceived roles celibacy and homosexuality have in the crisis.

But also, the right-wing advocacy group Church Militant, representing the latter views, held a rally adjacent to the hotel Nov. 13 at a pavilion used for concerts. About 300 attended, not the thousands projected. Signs such as “Resign Now” hung on the fence outside the pavilion, which could be seen by the bishops as they left the hotel ballroom where their meetings took place.

Because of predicted protests, this meeting had tighter security than most reporters remember from any other bishops’ meeting.

During presentations and comments from the floor, the Dallas meeting was not far from anyone’s mind.

“We have come a long way since 2002, but we still have some way to go,” said Cardinal Donald W. Wuerl, apostolic administrator of the Archdiocese of Washington, who faced pressure to resign after the Pennsylvania grand jury report detailing sexual abuse claims in six dioceses in that state painted a mixed picture of how he handled some of the cases when he was bishop in Pittsburgh.

Some spoke of the 2018 meeting as a moment for the church and expressed disappointment that the bishops would not be able to leave with definitive action in hand, like they did in 2002 when they approved the “Charter for the Protection of Children and Young People” and the zero-tolerance policy for priests and church workers after an allegation of child sexual abuse against them is admitted or proven.

In his closing address to the bishops, Cardinal DiNardo said he “opened the meeting expressing some disappointment but I end it with hope,” stressing that the discussion they began in Baltimore will serve as a “a springboard for action.”

Comparing the two meetings 16 years apart and looking ahead, Francesco Cesareo, president of the National Review Board, told Catholic News Service: “This is a moment of opportunity and it is not a moment to be wasted. If we don’t get it right this time we may not get a third chance to really grapple with this issue.”