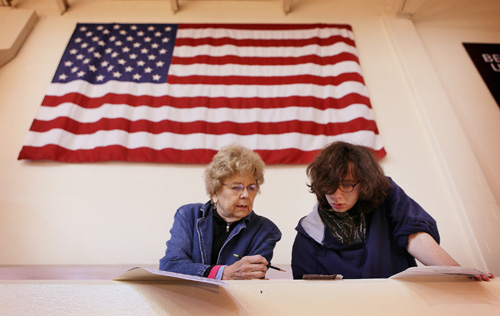 Undertaken by the Institute for Policy Research and Catholic Studies at The Catholic University of America and Faith in Public Life, the survey found that Catholics across the political spectrum are hearing the pope’s message of love and mercy and would welcome a widening of the perception that the church’s primary concerns are the so-called “culture war” topics of abortion and same-sex marriage.

“The most important takeaway [from the survey] is for all of us to recognize that this pope offers a framework for consideration of so many aspects of our public life,” Stephen Schneck, institute director, said during a news briefing Sept. 16 at the National Press Club to release poll results. “He’s offering us a way to rethink issues that are so important in our contemporary world.”

The survey found that 82.5 percent of Catholic likely voters favorably viewed the pope while 10.9 percent saw him unfavorably. A related question on whether the pope was moving the church on the right path or the wrong direction found that 82 percent supported his work while 18 percent did not.

Latinos supported the pope by an 84.4 percent to 6.5 percent margin, with 9.1 percent unsure. On whether the church is on the right path, 89.6 percent of Latinos agreed while 10.4 percent disagreed.

Broken down further, 92 percent of self-identified Democratic respondents support the pope as do 77 percent of independents and 70 percent of Republicans.

The poll’s findings were released six days before Pope Francis was to arrive in the United States for a tour of Washington, New York and Philadelphia. He will speak to a joint meeting of Congress and the U.N.
General Assembly and participate in the World Meeting of Families. In addition, he planned to visit a Catholic Charities-run meal program, a Catholic elementary school and a prison at each locale.

The poll examined issues related to economic inequality and the pope’s encyclical on the environment, “Laudato Si’, On Care for Our Common Home,” as well as the feelings of Latinos for the pope. Latinos represent a significantly growing segment of the Catholic Church.

By a 77 percent to 23 percent margin, respondents agreed that Catholics should pay attention to a wide range of issues as opposed to a set of “non-negotiable” issues when deciding whom to support at the election booth.

John Gehring, Catholic program director at Faith in Public Life, explained that the poll’s results point to the desire by Catholic respondents to “expand the voice on what encompasses human dignity.”

“Perhaps more than any other religious leader, Pope Francis provides a different kind of face to Catholics. Pope Francis is not changing church teaching, but has emphasized the church cannot only be known for those positions [on abortion and same-sex marriage],” Gehring said.

“I think he is reorienting the conversation, not throwing doctrine out the window, but putting people at the center. He sees human beings as the center of church doctrine.” he added.

Two other participants at the survey’s release, Sister Simone Campbell, a Sister of Social Service who is executive director of Network, a Catholic social justice lobby, and Melinda Henneberger, a political writer at Bloomberg Politics, said the key to the pope’s visit will come after he returns to the Vatican.

“There’s a lot of press interest before the pope comes and then we quickly develop amnesia,” Sister Simone said. “The following week after the visit on [Capitol] Hill is the budget appropriations process and the narrative there is to shut the government down over Planned Parenthood funding. … I worry that while the focus is on the pope’s message right now, we need to keep the message out there after he’s gone.”

Henneberger said she expects that Latinos will appear in large numbers to welcome the pope in each of the cities he visits. “Excitement for him and acting on that excitement in the voting both are two different things,” she said.