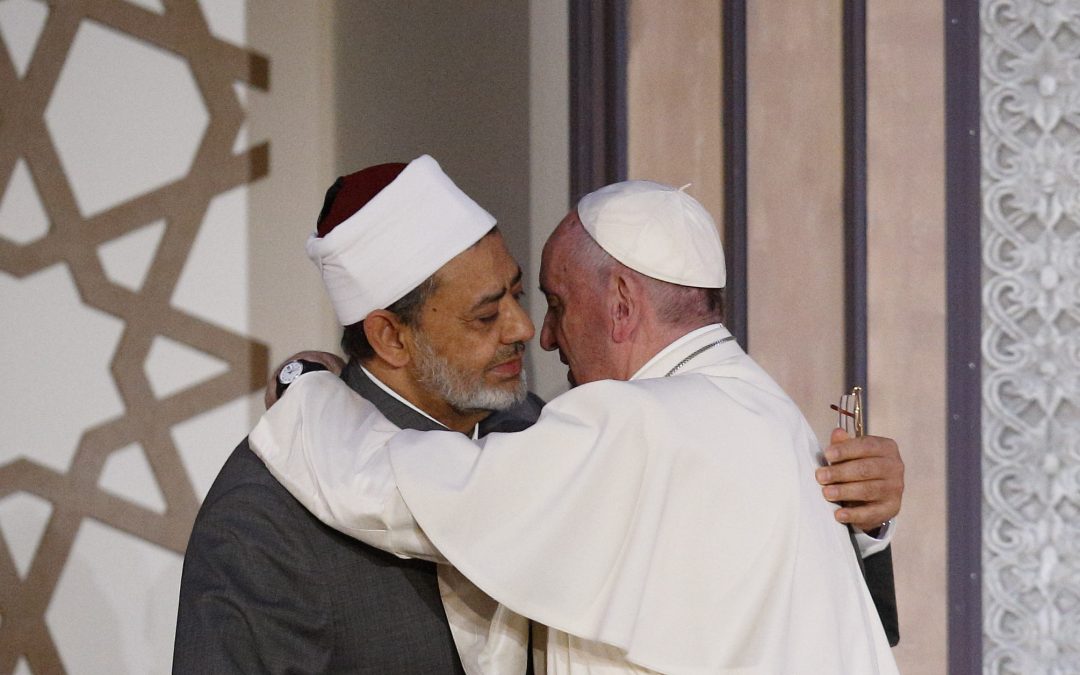 CAIRO (CNS) — Calling his visit to Egypt a journey of “unity and fraternity,” Pope Francis launched a powerful call to the nation’s religious leaders to expose violence masquerading as holy and condemn religiously inspired hatred as an idolatrous caricature of God.

“Peace alone, therefore, is holy, and no act of violence can be perpetrated in the name of God, for it would profane his name,” the pope told Muslim and Christian leaders at an international peace conference April 28. Ecumenical Patriarch Bartholomew of Constantinople was in attendance.

Pope Francis also warned of attempts to fight violence with violence, saying “every unilateral action that does not promote constructive and shared processes is, in reality, a gift to the proponents of radicalism and violence.”

The pope began a two-day visit to Cairo by speaking at a gathering organized by Egypt’s al-Azhar University, Sunni Islam’s highest institute of learning.

He told reporters on the papal flight from Rome that the trip was significant for the fact that he was invited by the grand imam of al-Azhar, Sheik Ahmad el-Tayeb; Egyptian President Abdel-Fattah el-Sissi; Coptic Orthodox Pope Tawadros II; and Coptic Catholic Patriarch Ibrahim Isaac Sedrak of Alexandria.

Having these four leaders invite him for the trip shows it is “a trip of unity and fraternity” that will be “quite, quite intense” over the next two days, he said.

Greeted with a standing ovation and a few scattered shouts of “viva il papa” (long live the pope), the pope later greeted conference participants saying, “Peace be with you” in Arabic.

He gave a 23-minute talk highlighting Egypt’s great and “glorious history” as a land of civilization, wisdom and faith in God. Small olive branches symbolizing peace were among the greenery adorning the podium.

Religious leaders have a duty to respect everyone’s religious identity and have “the courage to accept differences,” he said in the talk that was interrupted by applause several times.

Those who belong to a different culture or religion “should not be seen or treated as enemies, but rather welcomed as fellow-travelers,” he said.

Religion needs to take its sacred and essential place in the world as a reminder of the “great questions about the meaning of life” and humanity’s ultimate calling. “We are not meant to spend all of our energies on the uncertain and shifting affairs of this world, but to journey toward the absolute,” he said.

He emphasized that religion “is not a problem, but a part of the solution” because it helps people lift their hearts toward God “in order to learn how to build the city of man.”

Egypt is the land where God gave Moses the Ten Commandments, which include “Thou shalt not kill,” the pope said. God “exhorts us to reject the way of violence as the necessary condition for every earthly covenant.”

“Violence is the negation of every authentic religious expression,” he said. “As religious leaders, we are called, therefore, to unmask the violence that masquerades as purported sanctity and is based more on the ‘absolutizing’ of selfishness than on authentic openness to the absolute.”

“We have an obligation to denounce violations of human dignity and human rights, to expose attempts to justify every form of hatred in the name of religion and to condemn these attempts as idolatrous caricatures of God.” God is holy, the pope said, and “he is the God of peace.”

He asked everyone at the al-Azhar conference to say “once more, a firm and clear ‘No!’ to every form of violence, vengeance and hatred carried out in the name of religion or in the name of God.”

Not only are faith and violence, belief and hatred incompatible, he said, faith that is not “born of sincere heart and authentic love toward the merciful God” is nothing more than a social construct “that does not liberate man, but crushes him.”

Christians, too, must treat everyone as brother and sister if they are to truly pray to God, the father of all humanity, the pope said.

“It is of little or no use to raise our voices and run about to find weapons for our protection,” he said. “What is needed today are peacemakers, not fomenters of conflict; firefighters, not arsonists; preachers of reconciliation and not instigators of destruction.”

The pope again appealed for people to address the root causes of terrorism, like poverty and exploitation, and stopping the flow of weapons and money to those who provoke violence.

“Only by bringing into the light of day the murky maneuverings that feed the cancer of war can its real causes be prevented,” he said.

Education and a wisdom that is open, curious and humble are key, he said, saying properly formed young people can grow tall like strong trees turning “the polluted air of hatred into the oxygen of fraternity.”

He called on all of Egypt to continue its legacy of being a land of civilization and covenant so it can contribute to peace for its own people and the whole Middle East.

The challenge of turning today’s “incivility of conflict” into a “civility of encounter” demands that “we, Christians, Muslims and all believers, are called to offer our specific contribution” as brothers and sisters living all under the one and same sun of a merciful God.

The pope and Sheik el-Tayeb embraced after the sheik gave his introductory address, which emphasized that only false notions of religion, including Islam, lead to violence. The grand imam expressed gratitude for the pope’s remarks in which he rejected the association of Islam with terror.

The sheik began his speech by requesting the audience stand for a minute’s silence to commemorate the victims of terrorism in Egypt and globally, regardless of their religions.

“We should not hold religion accountable for the crimes of any small group of followers,” he said. “For example, Islam is not a religion of terrorism” just because a small group of fanatics “ignorantly” misinterpret texts of the Quran to support their hatred.

The security surrounding the pope’s arrival seemed typical of many papal trips even though the country was also in the midst of a government-declared three-month state of emergency following the bombing of two Coptic Orthodox churches on Palm Sunday. The attacks, for which Islamic State claimed responsibility, left 44 people dead and 70 more injured.

Egypt Prime Minister Sherif Ismail and other Egyptian officials warmly greeted Pope Francis on the airport red carpet after the pope disembarked from the plane.

They walked together, chatting animatedly, to the VIP hall of Cairo International Airport, then the pontiff was whisked off to the presidential palace to meet el-Sissi at the start of his brief 27-hour visit.

Pope Francis repeated his calls for strengthening peace in his speech to hundreds of officials representing government, the diplomatic corps, civil society and culture.

“No civilized society can be built without repudiating every ideology of evil, violence and extremism that presumes to suppress others and to annihilate diversity by manipulating and profaning the sacred name of God,” he said.

History does not forgive those who talk about justice and equality, and then practice the opposite, he said.
It is a duty to “unmask the peddlers of illusions about the afterlife” and who rob people of their lives and take away their ability to “choose freely and believe responsibly.”

Contributing to this story was Dale Gavlak in Amman, Jordan.