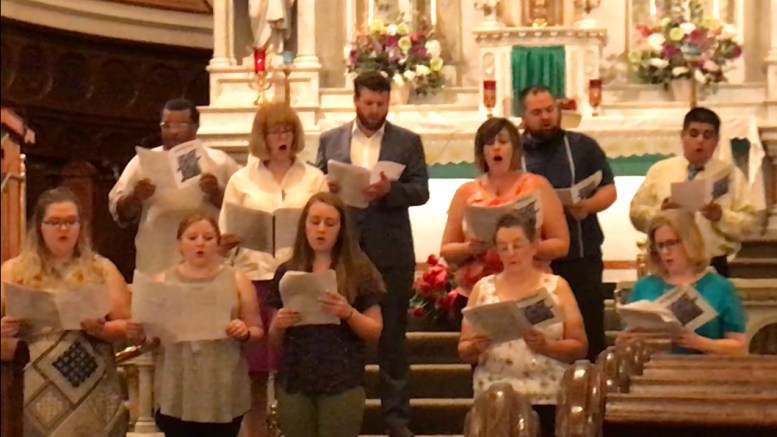 Submitted by Andrew Siuta
The Aug. 13 Monday Night Concert at St. Joseph–St. Patrick Church in Utica was a success. 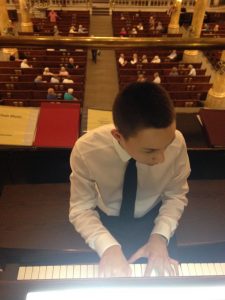 Organist Dominic Fiacco, 13, played tricky pieces exceptionally well: “Festmusikk,” by Mons Leidvin Takle, which sounds like a carnival and runs all over the keyboard; and a fantasia and fugue by Johann Sebastian Bach that bounced a theme between the manuals and pedals, building in complexity each time the theme reappeared.

The choir also did well, particularly with the “Gloria” from the Pope Marcellus Mass. Giovanni Pierluigi da Palestrina composed that Mass in the 16th century to prove that polyphony could still be intelligible, and the choir proved his point. In spite of six independent vocal lines sounding at once, the Latin text was not only clear but beautifully embellished. That took a lot of practice. Everyone had to know their part very well.

“Hallelujah” by Leonard Cohen was a crowd favorite, or at least Pastor Father Richard E. Dellos’ favorite, exhibited by the loud “athletic-field” whistle he gave at its conclusion. He had requested the song for his 50th jubilee in May, and the choir took a couple of months learning a choral arrangement by Hal Hopson.

The standing ovation at the program’s conclusion prompted an encore by Dominic. His grandmother shouted up a suggestion: Takle’s “Heart of Peace.”

Andrew Siuta is the music director of St. Joseph–St. Patrick Church. He played the organ and sang during the concert.