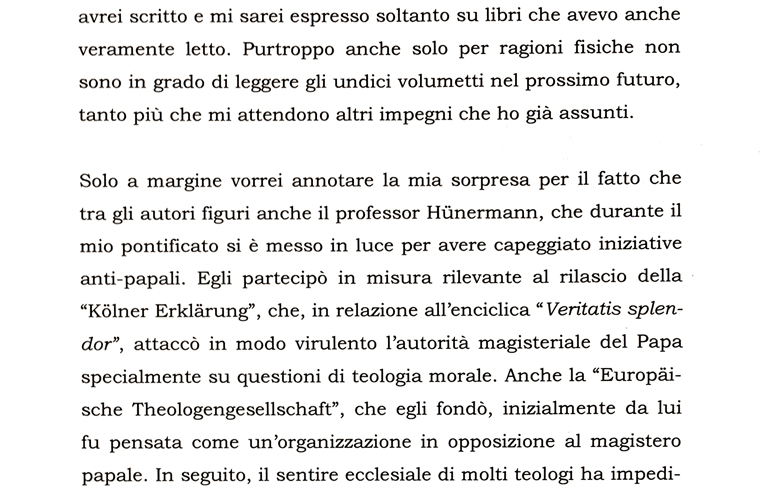 VATICAN CITY (CNS) — Five days after releasing only a portion of a letter from retired Pope Benedict XVI regarding a collection of books about the theology of Pope Francis, the Vatican Secretariat for Communication released the complete text of the letter.

In a portion of the letter never read at the presentation of the books nor shown in a blurred photograph of it distributed by the secretariat, Pope Benedict expressed his surprise at the choice of one of the theologians tapped to author a volume, Father Peter Hunermann, a retired professor of dogmatic theology at Tubingen University in Germany.

In the letter, released March 17, Pope Benedict said that “during my pontificate” Father Hunermann “led anti-papal initiatives” and that, after St. John Paul II published “Veritatis Splendor” in 1993, Father Hunermann was a major participant in a declaration by theologians attacking “in a virulent way the magisterial authority of the pope, especially on questions of moral theology.”

Pope Benedict’s letter was addressed to Msgr. Dario Vigano, prefect of the Secretariat for Communication, who had read selected paragraphs from the letter March 12 at the presentation of the volumes, “The Theology of Pope Francis.”

The books contradict “the foolish prejudice of those who see Pope Francis as someone who lacks a particular theological and philosophical formation, while I would have been considered solely a theorist of theology with little understanding of the concrete lives of today’s Christian,” the retired pontiff wrote in the section read by Msgr. Vigano and shown clearly in the photograph.

The communications prefect also read the lines that were blurred in the photograph explaining that 91-year-old Pope Benedict could not write a theological commentary on the volumes since he had not read them and would be unable to do so.

In a statement released with the full text of the letter March 17, the Secretariat for Communication said the earlier excerpting of the letter and the blurring of lines on the photograph of the letter’s first page was not intended to deceive.

“From the private letter, that which seemed opportune and relative to the initiative was read, particularly what the emeritus pope affirmed about the philosophical and theological formation of the current pontiff and about the interior union between the two pontificates, omitting some notes relative to the contributors of the series,” the statement said.

“The choice was motivated by privacy and not by any intent of censure,” the statement continued. “To dispel every doubt it was then decided to make the letter known in its entirety.”