Veteran missionary ‘has more energy than any of us’ 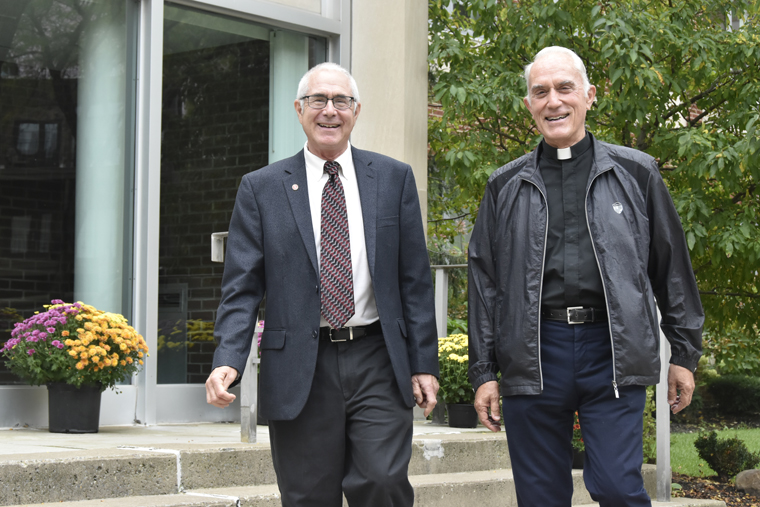 It’s as if he can sense the longing of family and friends—and the smell of cherry pie—from 6,600 miles away.

Binghamton native Father Michael Bassano, a Maryknoll missionary, lives in a walled UN five-square-kilometer area on the east bank of the White Nile in South Sudan, where Catholic News Service reported recently that “armed conflict continues to cause death and displacement” in the wake of the civil war that started there in 2013.

Father Bassano has served as the Catholic chaplain in the UN POC (Protection of Civilians) camp steadily since 2014. “The church becomes this center of activities for our Catholic community,” he said, citing the youth group, dance group, choir and Legion of Mary.

Every three years he gets home leave. So on Sept. 5, he flew for 14 hours—from Juba, the capital of South Sudan, to Nairobi, Kenya, and then to New York City. He reported back to Maryknoll headquarters in Westchester County where he received medical tests.

“I’m in good health,” the 72-year-old priest said Oct. 6 on a visit to Syracuse, where he met with Bishop Douglas J. Lucia and had a pizza lunch with the Sun. Previously a priest in the Diocese of Syracuse, Father Bassano has served as a Maryknoll priest in Chile, Thailand, Tanzania and, steadily since 2014, South Sudan.

On Nov. 7, Father Bassano will fly back to the POC six kilometers from the town of Malakal in the northeastern part of the country. In the meantime, he is visiting family, relatives and friends. He had been fully vaccinated with the AstraZeneca vaccine for COVID-19, which the FDA reports is not authorized for use in the United States, so since his arrival here Father Bassano has also had two doses of the Pfizer vaccine.

Accompanying Father Bassano on his visit to the Chancery in Syracuse was Deacon Paul Bork, Director for Mission Education and Promotion, East Region of the Maryknoll Fathers and Brothers.

Seated next to Father Bassano at the lunch at a pizza shop in Syracuse, Deacon Bork was asked to give his view of Father Bassano’s recent ministry in South Sudan.

“It’s an example,” he said. “It’s a powerful witness to Father Mike, to your total commitment to the Gospel and to being with those people who are in great need, accompanying them, being in SOLIDARITY with them. It’s a great and powerful witness to ALL of us, all followers of Jesus, on what being a real missionary disciple is all about; and we’re all very proud to be connected in some small way with Father Mike.”

Also proud of Father Bassano is his niece Gina Wright of Schenectady. He was able to visit her twice on this home leave, including her 50th birthday party. Attendees included Gina’s sisters Lisa Cassella-Thiele of Schenectady and Maria Thompson of Maryland and their families.

“It’s always a joy to see him,” Gina said by phone. “He looks great, he has more energy than any of us. He can party like the rest of us; we danced, we sang, we went apple picking. We had a lot of fun.”

Gina’s son plays soccer for SUNY Polytechnic Institute in Utica so they all went out there and visited “Uncle Mike’s favorite bakery, the Florentine.”

“A friend of mine actually made him one from scratch,” Gina said, “so he was very happy. … I took him out to dueling pianos one night and we sang and we danced. Oh, yeah, he stayed up as late as all of us.”

Asked what she thinks of Uncle Mike’s ministry in the POC camp, Gina said, “I think it’s amazing.” She is impressed that he lets the people in the camp know that they’re not alone, that there are other countries that are there for them.

“I think it’s pretty selfless,” she said, “and it’s pretty amazing and he’s very happy there. And during COVID when it got absolutely horrible, he kept in touch via email. He was in quarantine more than any of us, and he kept his head up and he just was very positive.

“So, yeah, he shared a lot with us and things that go on there. … It also gives other people perspective on what really goes on in the rest of the world.”

Asked if the civil war is still basically going on, he said: “It is still. They would say that the peace agreement of 2018 which ended the heavy fighting, has stopped heavy fighting, yes, but still now there’s sporadic violence against civilians …, intercommunal clashes over cattle and land in different parts of the country. … It’s a fragile peace agreement if there is one—it’s not having any effect with people after eight years being in our camp or being in any other part of the country.”

One person who came to live at the camp was a soldier who had defected from the army because “he couldn’t take any more of this killing of innocent civilians,” Father Bassano said. But one day the ex-soldier’s body was found in the latrine. “We prayed over that person. … He’s one of us,” Father Bassano said.

The people of the camp live in close quarters with leaky plastic sheeting overhead and dirt floors. “You visit them, they’re just staying on their bed sitting down because the water’s underneath,” Father Bassano said.

Recently there was news that because of the recent flooding in two counties east of Malakal, the UNHCR (UN Refugee Agency) team had distributed 300 bags of rice to vulnerable hungry people.

“The rice comes from the Maryknoll famine relief project that continues to help our people here which I am coordinating … with our UNHCR team in Malakal,” Father Bassano said. He added: “We’re looking to provide a second grinding mill for the people in some of the villages outside of our camp.”

Given the difficult situation there, Father Bassano was asked what he hopes to accomplish in South Sudan.

He said: “What I see is … resilient faith of the people that say this will change. … They may see no change at all in the next five or 10 years but they say, no, we WILL get better. …

“That’s why the kids’ celebrations in the church are so important—because that’s the place where they come together to talk about all the wounds and sicknesses and difficulties of living in the camp [and] know that we’re still alive, we can still celebrate our faith. It will get us through this crisis. They STILL after eight years have not lost that sense of hope for change.”

The POC is just coming out of the rainy season, which produces “cotton mud” that sticks to Father Bassano’s boots. The weather there now can get to 90 or 100 degrees. “December to February is what we call the cold season,” he said, when it could be in the high 50s in the morning; December is the coldest month.

Father Bassano will be 75 in December and he hasn’t decided what comes after that; Maryknollers don’t actually retire, he said, they transition to something else either in this country or overseas.

In his travels while on home leave, he sent this update to the Sun:

“How wonderful it has been being back in the States visiting family and friends before leaving back to South Sudan on November 7th.”