Virtual Masses a balm for viewers near and far 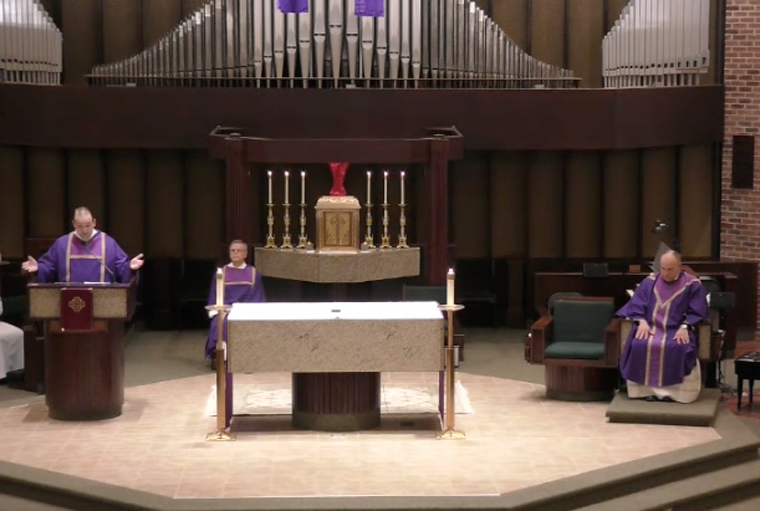 In a time of pandemic, virtual Masses are enjoying an unbounded viewership.

He cited the connections of families from the parish: “They say, ‘now our parish is offering Mass at this time’ and people will tune in by way of the live-stream.”

About two years ago, Father Manno said, Holy Family decided to put a camera in the church in order to simulcast the Mass downstairs in the parish hall, primarily for Christmas Eve Masses, because it could serve as an overflow; then after that, the parish decided to start livestreaming, primarily the 10:30 a.m. Mass on Sundays.

“And people started responding saying how wonderful it is,” he said. Typically, when church was in session, the virtual Mass would get 50 views for the 10:30 Mass.

His livestream schedule: Mass and rosary at 8 a.m. Monday through Saturday; Holy Hour at 6:30 on Wednesday nights; Stations of the Cross at 5:30 p.m. Friday; and Mass at 9 a.m. on Sundays. Visit holyfamilysyr.org for information.

“I think the comforting thing for me as the pastor,” Father Manno said, “is to know that in this time of social distancing, we can’t have anybody in church; the beauty is to know that we can bring the church into people’s homes through the gift of this technology.”

“Overall,” he added, “I think it’s been a tremendous blessing to be able to have this. … In this time when we’re socially distancing ourselves so we can stay safe and stay healthy from this virus, the beauty is knowing that we can still connect by way of the live-stream, that we can still come together in … an online community of faith and still be connected in that way.”

Virginia, Florida tune in too

Father Joseph E. Scardella, pastor of  Holy Trinity/Stephen Parish in Fulton and Phoenix, is also pleased to draw viewers of virtual Masses from near and far. His Masses are live-streamed at 9 a.m. every Wednesday and Sunday on Facebook.

“I have parishioners in Florida that are watching it,” he said, “parishioners that are in Virginia on vacation watching it, I have people from all over, and … they’re very pleased to see it online.”

He reported getting “a lot of good comments; we’ve had over 250 people watching the Mass at one time on Sunday, which is great. We’re posting it as an event on Facebook so people can get a notification … before Mass begins, to remind them that we’re streaming, and I’m doing it both for St. Stephen’s and Holy Trinity. So we’re doing it for both parishes. 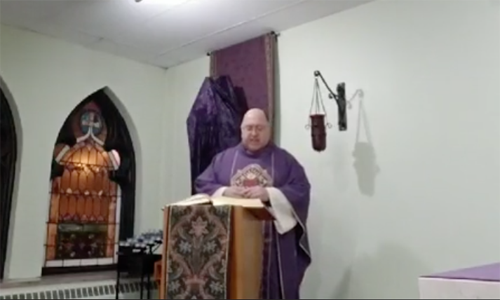 Father Scardella said the live-streamed Mass stays on Facebook for a little more than 24 hours. His Holy Week schedule for the Masses: 5 p.m. on Holy Thursday, noon on Good Friday, and 9 a.m. on Easter Sunday.

Father Scardella has been filming most of the Masses in the daily Mass chapel at Holy Trinity. But on Holy Thursday, he will livestream from St. Stephen’s. He said that if he streams from Holy Trinity on Palm Sunday, Good Friday, and Easter Sunday, his organist can play, “so there’ll be regular Easter music or music for Good Friday’s service.”

The streamed Masses can be found at facebook.com/HolyTrinityFulton and  holytrinityfulton.org.

Reached last week at All Saints Church in Syracuse, the pastor, Father Frederick D. Daley, was getting ready to film a virtual Mass for the fifth Sunday of Lent.

“I think every parish is doing different things to try to have people feel still connected with the parish,” Father Daley said.

“We haven’t gotten capacity to livestream,” said All Saints Pastoral Associate Meg Ksander, “but we are going to video the weekend Mass for our community. … We’re very grateful that we are being able to move in this direction with our people.”

The Masses will be viewable on All Saints’ Facebook page and also at allsaintssyracuse.org, which also offers a letter from the Pastoral Team on the parish’s response to the coronavirus pandemic.

Asked how he crafts a homily at a time when people are fearful, Father Daley cited the readings for the fifth Sunday of Lent: “The message of Jesus is all about life and resurrection, and we will get through this with God’s help, and we need to support one another.”

Father Daley is encouraging families to pray together, and he recommends calling a friend and praying a decade of the rosary together.

“We need to obviously take care of ourselves physically and should respect one another’s distance,” he said, but he added that people can also stay connected spiritually.

All Saints Church, he said, is open from 8 in the morning till 8 in the evening; antiseptic is available, and a number of people have been coming in. People also walk around the church’s gardens, and “many parishioners have mentioned how this is … going to be an extended Lenten retreat, a little desert time to spend more time in prayer and reading and meditation, and so I think people are finding consolation in their faith during this difficult time.” 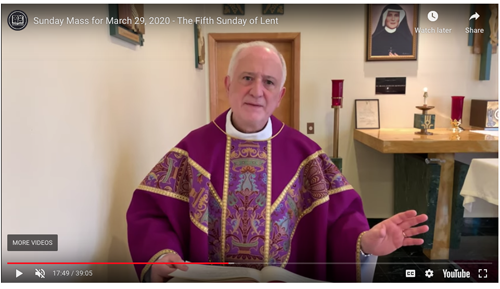 He likens it to “the people who were frozen in fear as they watched Jesus walk up to Calvary and be crucified — his mother and his disciples were frozen in fear. And I think we liken our situation to the Paschal mystery, to the mystery of Jesus’ death and resurrection, that his death, his acceptance of death, his willingness to go through the Passion, was the way that he proved his oneness with us, especially at a time like this.”

He added: “I think the resuscitation of Lazarus has a lot to say about where we are in terms of this situation.Jesus is making clear that he’s more powerful than any assault to our bodies or our souls.”

Father Clemente has been prerecording Masses that are available after 4 p.m. on Saturdays. The Masses are recorded in the Divine Mercy Chapel in the St. Cecilia building: “It’s a very nice chapel with a marble altar. … It’s basically a priest, a lector, and a server.” The parish’s other building is the Our Lady of Peace structure.

Mass and the Stations

Both the Stations and Sunday Mass, he said, can be found at stmariannecope.org and at the St. Marianne Cope posts on Facebook.

As he addresses a camera instead of faces in pews, he said, “I try to think of the people that I want to reach. And I keep them in mind. When we were recording this morning for the upcoming Sunday Mass, I was thinking of where people sit in the church and who would be there, and that kind of thing.” 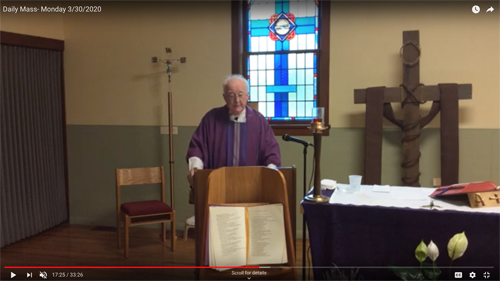 Father Clarence J. Cerwonka offers the Masses at Most Holy Rosary in Maine. He retired about three years ago.

Father Cerwonka has been recording the 9 a.m. Masses, for YouTube, on weekdays and also Sundays in the church hall — “just myself and maybe two other people.”

“We just decorated an area there,” he said. There are some stained-glass windows, because the hall was at one time the church, “so we just figured that’s the simplest way to do it.”

Father Cerwonka came to Most Holy Rosary in 2006. In addition to saying Mass he also holds twice-a-week Bible-study sessions. “We’ve gone through most of the Bible, maybe at least half of it,” he said. He tries to help the people “find their way through the Scripture, because that’s the biggie.”

At a time when they are concerned about their physical survival, what is he thinking about people’s spiritual survival?

“I think it’s a wake-up call,” he said. “You can talk to God at any time. He’s available 24/7, no contracts, no charge. Just find a place where you can be by yourself for 10 or 15 minutes, and just write him a letter, tell him how you feel, see what happens. You may get an answer during your sleep or during the day.”

A good number of parishioners, he said, “have made comments that this is a good time: time to be quiet, and reconnect with your family and your God.”