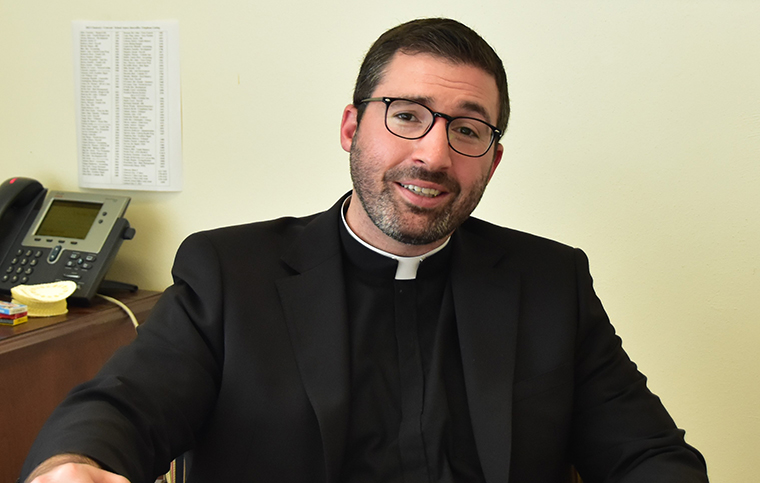 “Without the priest there is no Eucharist…Pray for Vocations!”

“It just feels like vocations promotion has been integrated into our diocesan mission in a wonderful way,” says Father Jason Hage. The director — also pastor of three parishes and a mission constituting “Route 20 Catholic” in Madison and Oneida counties — leads a team of priests committed to an ongoing focus on vocations. It’s a year-round effort that comes under the spotlight as we celebrate National Vocation Awareness Week, Nov. 6 through 12.

This year, the logo for the national Eucharistic Revival is part of vocations week promotion. “Bishop Lucia specifically asked that we focus on the relationship between the priest and the Eucharist,” reports Father Hage. It’s a theme that will be woven into practically all diocesan initiatives over the next three years, but the Eucharist and priesthood especially, and always, go hand in hand.

The diocesan priestly vocations team executive board consists of four priests in addition to Father Hage, referring to them as the “think tank,” as well as a number of other younger priests who assist as school associates. Each diocesan school has an associate assigned.

It’s this team that has developed a number of year-round initiatives to spur priestly vocations:

The Fisherman’s Club — “Bishop (Emeritus Robert J.) Cunningham asked me to start that, I think, in my second year of priesthood,” says Hage of the Fisherman’s Club, now in its eighth year. “That whole time we averaged about five discerners, but every year we had one of those young men apply to the diocese for acceptance to formation.” He adds that seven men — six in seminary study and one now ordained to the priesthood — came through the Fisherman’s Club. Father Nathan Brooks has taken over the coordination of the club now.

Discernment 101 — Discernment 101 came about as a result of weekly meetings among discerners that moved to the Zoom online platform, forced there by the coronavirus pandemic. “We were trying to keep that connection among discerners, but what we recognized is that we were reaching more discerners from our diocese who were out of state at school. So, college kids who I would never really be able to have contact with, are now acknowledged and we keep up our relationship and dialogue.” Growing out of a program called Priesthood 101, Father Hage says the current effort averages about seven participants who engage in a brief presentation, small-group discussions, prayer and fellowship.

Diocesan Altar Server Celebration — This is a new and recent event that attracted more than 150 altar servers from parishes around the diocese to the Cathedral of the Immaculate Conception. “The altar server actually performs a wonderful duty within the parish and that ministry should be honored and recognized especially right now,” Father says. “This is how we raise awareness, at least in that child’s heart, about serving at the altar in this way as a form of service to Jesus and his Church.”

According to a Center for Applied Research in the Apostolate (CARA) study, more than seven in 10 priests ordained in 2020 served at the altar as youngsters. It was the most common-denominator activity among men answering the priestly calling that year.

“One of the most rewarding things for me is working with the Catholic schools’ office,” Father adds. (Schools Superintendent) Bill Crist and his team just wrapped their arms around this call during the Year of Vocations, and now our whole team has such meaningful contact with the schools and the student body.”

While it might be natural for Father Hage and his team to focus on the number of vocations fulfilled, he believes that it is the quality and deeper impact of their work that makes the difference. “What did God make me for? What is my heart built for?’” Father says these are the central questions that the Office of Vocation Promotion is focused on raising in the minds of young discerners.

He adds that his goal as a vocations promoter is “to make sure that all of the faithful of the diocese take the call to holiness seriously. “Do you acknowledge your call to become a saint? Are you ready to be generous with your life?”