‘We became bigger people’: Diocesan participants express their wonder over March for Life 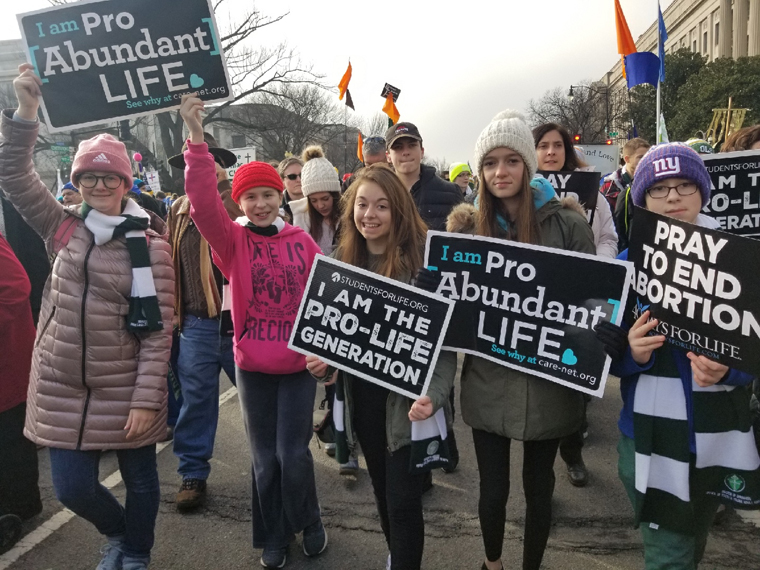 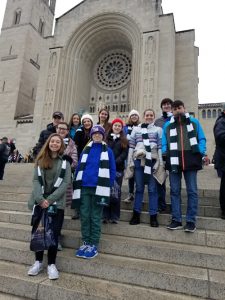 Before the March for Life, teens from St. Mary Church, Cortland, gather outside the Basilica of the National Shrine of the Immaculate Conception in Washington, D.C. (Photo courtesy Jen Fischer).

As they prayed that all babies may grow up, they themselves were transformed.

McKenzie Ganache, 18, a senior at Maine-Endwell Senior High School, was among the hundreds of pilgrims from the Diocese of Syracuse at the 46th annual March for Life last week. Despite the fact that the pro-life people faced opposition, McKenzie said, “we became bigger people instead of turning to ignorance and sadness.”

No official crowd counts are available for such events, but ahead of this year’s rally and march, organizers expected more than 100,000 to participate.

Roe v. Wade in 1973 legalized abortion. Jeanne Mancini, president of March for Life, welcomed the crowd and thanked them for coming once again to march to end abortion, what she called “the greatest human-rights abuse of our time.”

The march was generally prayerful and quiet, but McKenzie at one point encountered a man who was preaching that Catholics are evil because of the scandal of sexual abuse. “Every person that passed him prayed over him,” McKenzie said, instead of verbally abusing him.

She said the man even grabbed a priest by the collar and called him very offensive names. The priest continued to pray, she said, and the police pulled the man away. “He stopped screaming and stared at everyone,” she said, “because we weren’t giving him the reaction he wanted.”

McKenzie said she loves the number of young families at Church of the Holy Family in Endwell and she hopes to raise her own family someday.

Since she moved to New York state from Colorado two and a half years ago, she has become accustomed to meeting new people. At the march, where she was accompanied by her mother, she said she met two beautiful elderly women who told her of a pilgrimage on which they prayed with nuns in France. She also met a D.C. lawyer who works with pro-life groups; she may try for an internship with his company this summer. 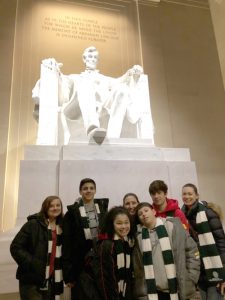 Members of the group from St. Elizabeth Ann Seton Church in Baldwinsville visit the Lincoln Memorial after the March for Life. (Photo submitted)

McKenzie believes that no one has the right to take away the life “of something that can’t speak for itself.” Several people on social media questioned her participation in the march, but she didn’t lecture to them. “I want to tell them why I believe what I believe in; maybe it changes what they believe in,” she said.

“I went on the march because of the fact that I thought it was important to represent these people [the unborn] unrepresented in our country,” said John Gill, 17, who is homeschooled and attends St. Joseph Church in Endicott.

He said his concern springs from the fact that he has five siblings. “I’ve been around a lot of children,” he said. “I guess children are very special. I see how unique they are. I think that all of them deserve life.”

John found it compelling “seeing people who really care.” His Southern Tier group, which included people from Our Lady of Sorrows in Vestal, attended the pre-march

Life is VERY Good rally at George Mason University in Fairfax, Va. He marveled at the large number of church groups, youth groups, schools, and colleges from all over the nation. He said people were joyous, excited, and full of energy.

After the march, his group went on a monument tour in D.C. “We love our country,” he said. He added: “You want your country to be the best it can be and a country without abortion would be the best.”

Another marcher, Abigail Docos, 14, a ninth-grader and a member of the pro-life club at Bishop Grimes Jr./Sr. High School in East Syracuse, said the Roe v. Wade decision made her “really sad. … I wanted to help.”

At the Life is VERY Good rally, she said, she really felt Christ coming to her and talking to her. She said one of the speakers has an adopted son whose mother had gone to an abortion clinic but could not bring herself to go in. “Now we need to get more people to have enough self-confidence not to abort a baby,” Abigail said.

She attends Eucharistic Adoration at Bishop Grimes on First Fridays, and she found the Life is VERY Good rally’s Adoration to be very touching. When the priest went around and blessed everyone, she said, she had never felt anything like that before.

She held a sign during the March for Life. One side said, “I am the pro-life generation”; the other, “Defund Planned Parenthood.” She noted the march attracted people from every generation.

“I really enjoyed the environment. … Been to Mass twice so far” on the trip, she said. 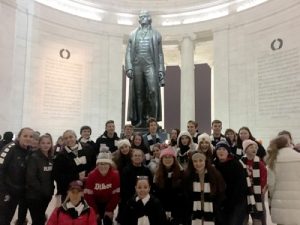 Students from the Diocese of Syracuse pause for a photo in the Thomas Jefferson Memorial after the March for Life. (Photo courtesy Megan Fallon)

Sam Hood, 15, a sophomore at Bishop Ludden Jr./Sr. High School in Syracuse, attended the March for Life for the second time. He views abortion as taking away a life with all its possibilities of improving the world.

Sam said a rock star who spoke at the Life Is VERY Good rally said the devil is afraid of joyous Catholics. Sam had thought the only message he would encounter was pro-life, but he did observe what was basically a pro-abortion sign. “Around that sign was a bunch of pro-life signs,” he said. He found people to be friendly and non-violent.

He enjoyed meeting new people from the diocese. Even though he is one person, he feels he helped to promote the pro-life cause. He found the march to be “a really life-changing event” that is “fun and cool.”

Six buses had brought the diocesan contingent to D.C.; one of the buses returned home after the march. Sam was among those who stayed to tour Washington.

Megan Fallon, a lawyer and a religious-education teacher at St. James Church in Cazenovia, was a bus captain on the trip. She said participants had hoped to tour the Smithsonian museums, which were closed due to the federal shutdown, and Arlington National Cemetery on Saturday, but the weather forecast sent them back home Saturday morning.

Fallon said the rally at George Mason University was sold out with about 8,000 attendees, a band, the Sisters of Life, confessions with lines out the door, and Adoration. On Friday, the diocesan contingent attended Mass at the overflowing Crypt Church of the Basilica of the National Shrine of the Immaculate Conception in D.C.

Then the March for Life processed up Constitution Avenue. Fallon said the event served as a pilgrimage, retreat, and prayer vigil — praying for an end to abortion and reversal of Roe v. Wade. “People always talk about how peaceful the march is,” she said.

The youth are very inspiring, she said, very thoughtful, faithful, and very respectful throughout it and they are interested in the intellectual side of it too.

“It brings people together a lot more,” Sam Hood said.