Where silence should reign: Pope will pray, not speak, at Auschwitz 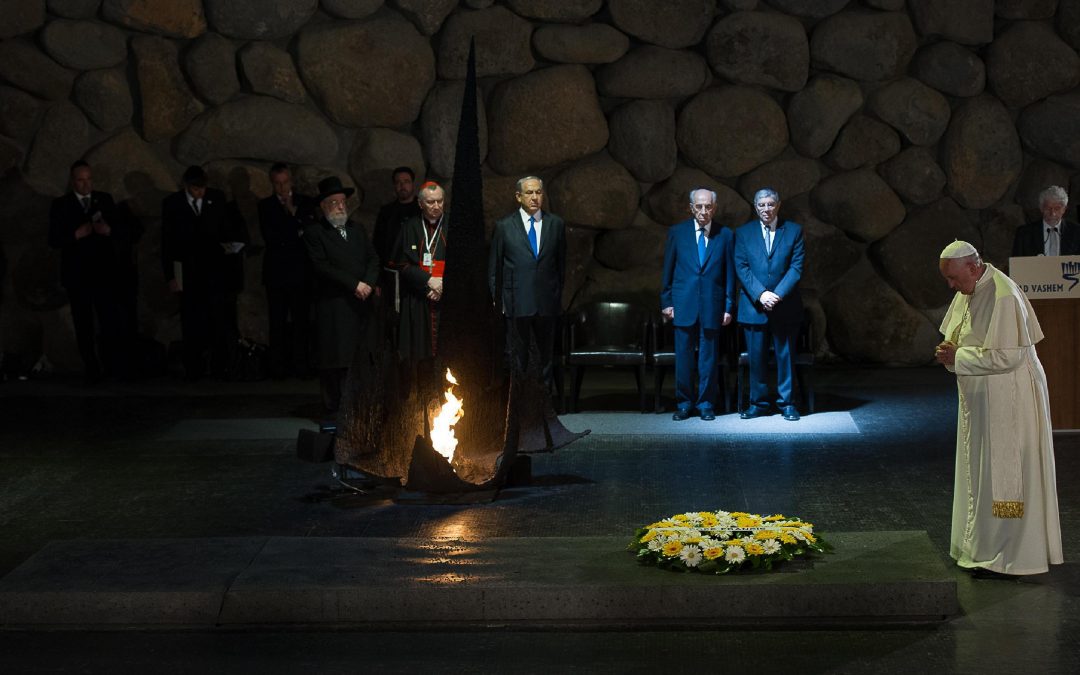 VATICAN CITY (CNS) — Tears and not words. Prayers and not greetings.

During his trip to Poland for World Youth Day, Pope Francis will go to the Auschwitz-Birkenau Nazi death camp. He said he wants to go alone and say nothing.

When Pope Francis speaks, he can delight fans and frustrate critics. He can wax poetic or be bluntly funny about human quirks.

But in the face of great suffering and horror, his first and strongest inclinations are silence, a profoundly bowed head and hands clasped tightly in prayer.

Pope Francis had asked that there be no speeches during his visit to Armenia’s genocide memorial June 25. At times, even the prayer service there with the Armenian Apostolic patriarch seemed too wordy. An aide gently cupped his elbow when it was time to end the silent reflection and begin the service.

The Vatican’s schedule for the pope’s visit to Auschwitz-Birkenau July 29 had him giving a speech at the international monument at Birkenau, just as St. John Paul II and Pope Benedict XVI did.

But on the flight back to Rome from Armenia, Jesuit Father Federico Lombardi, Vatican spokesman, told Pope Francis, “I heard that you want to live that moment more with silence than words.”

The pope responded by reminding reporters that in 2014 when he went to Redipuglia in northern Italy to mark the 100th anniversary of World War I, “I went in silence,” walking alone among the graves. “Then there was the Mass and I preached at Mass, but that was something else.”

Speaking about his planned visit to Auschwitz-Birkenau, “I would like to go to that place of horror without speeches, without crowds — only the few people necessary,” he said. “Alone, enter, pray. And may the Lord give me the grace to cry.”

Father Lombardi confirmed June 30 that the official program had been changed and the pope would not give a speech at the death camp. But it is not that Pope Francis has nothing to say about the horror of the Shoah, the importance of remembering it and the need to continue fighting anti-Semitism.

“The past must be a lesson to us for the present and the future,” he said Jan. 17 during a visit to Rome’s synagogue. “The Shoah teaches us that maximum vigilance is always needed in order to intervene quickly in defense of human dignity and peace.”

In the book “On Heaven and Earth,” written in 2010 with Rabbi Abraham Skorka, the future pope and rabbi discussed the Holocaust at length.

While the question “Where was God” is an important theological and human question, the pope said, “Where was man?” is an even bigger question. “The Shoah is genocide, like the others of the 20th century, but it has a distinctive feature,” an “idolatrous construction” in which the Nazis claimed to be god and embracing true evil tried to eradicate Judaism.

“Each Jew that they killed was a slap in the face to the living God,” the future pope wrote.

In a very formal, very solemn commemoration, Pope Francis visited the Shoah memorial, Yad Vashem, in Israel in 2014. He laid a wreath of flowers in memory of the 6 million Jews murdered by the Nazis, clasped his hands and stood in silence before slowly walking back to his place. He met six survivors of Nazi camps, kissing their hands in a sign of deference and recognition of their suffering.

Protocol for the occasion required a speech and, led to the podium, Pope Francis spoke softly, reflecting on the question of “Where was man?” and how could human beings have sunk so horribly low.

In his speech, he prayed to God, “Grant us the grace to be ashamed of what we men have done, to be ashamed of this massive idolatry, of having despised and destroyed our own flesh which you formed from the earth, to which you gave life with your own breath of life. Never again, Lord, never again!”

“Here we are, Lord, shamed by what man, created in your own image and likeness, was capable of doing,” he said. “Remember us in your mercy.”

After finishing the speech, the pope stood in silence at the lectern for almost three minutes, writing in the Yad Vashem guestbook.