Windows on the Past

St. Mary’s of the Lake reflects on its stained glass windows

SKANEATELES — There is a gem hidden in the heart of Skaneateles. It’s easy to see why it can be missed. When driving through the quaint town most are drawn to the lake. Some people are enchanted by the charming village shops and restaurants. Looking past all that, nestled among darling homes on Jordan Street is St. Mary’s of the Lake Church. 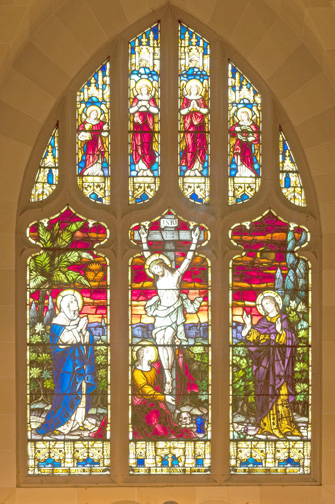 “Inside people are awestruck by the gorgeous stained glass windows,” said Lisa Leesman, facilitator of the Renew program at St. Mary’s. Renew is an international organization that has been helping over 150 dioceses nationwide to promote spirituality in the Catholic faith. The group at St. Mary’s Church has been meeting for one and a half years. An idea was created from this group to draw more people from the community into the church.

Leesman lived in Rome, Italy for six years where she often toured area churches. “Why not here?” she asked. “We have these wonderful stained glass windows,” she said motioning to them. “Why not showcase them and teach people about the religious significance, artistic quality and history of them?”

The women involved in the project worked feverishly gathering information about the windows and hosted an informative talk on Aug. 16th. Father Thomas McGrath, pastor of St. Mary’s, spoke to a nearly full church reflecting on the spiritual worth of the windows.

“I use the windows as an important visual aid during many of my homilies,” he said. He pointed out the stained glass window featuring “The Wedding Feast at Cana,” elaborating that he uses it during wedding celebrations.

McGrath also mentioned the window of “The Prodigal Son.” Many years ago it was decided that a confessional booth be built around that window. McGrath said it was an appropriate choice, considering how people could view it with a contrite heart while seeking absolution. The powerful image, with deep intense colors, sends a clear message to all who gaze at it.

McGrath felt two windows were switched during the installation. He had no logical explanation for it. “‘The Agony in the Garden’ should have come before ‘Jesus with Peter after the Resurrection,’” he said wearing a quizzical grin. Jerome Durr, local artisan, stood beside his parish priest and smiled. “I think it was human error,” he said. The heads in the crowd bobbed in unison, agreeing with this plausible theory while glancing back and forth at the two windows. “People make mistakes,” he said.

Durr informed the crowd that the stained glass windows were made by the Franz Meyer Company of Munich, Germany in 1926. In its entirety Durr felt the windows conveyed a feeling of the awe-inspiring omnipresence of God. Durr stated Franz Meyer’s stained glass windows told a story in glass by modifying the light, to make people feel holy and comfortable. He said German glassmakers often use symbols in their artwork. He pointed out the skull in the window of the Crucifixion as an example.

Many questions were raised about iconography and the differences in the halos of saints, angels, Apostles and Christ. Durr left some of the interpretations to be determined by the observer. He did question, however, whether the large rose window above the choir loft was made by Meyer, since its style appeared different from the others.

Durr also devoted time explaining the mechanics of making stained glass. He told those gathered that artists use paint colored with ground glass. Each brush stroke converts a piece of clear glass into one with brilliant colors after it has been fired in a kiln. Durr should know all about the process because he created a magnificent window entitled, “Jesus Went Down to Nazareth,” which hangs on the landing of the Holy Family Pastoral Center at St. Mary’s of the Lake Church.

As part of this program, Charles Major, the local historian, relayed stories behind each window. Major gave a tribute to each window, which was especially poignant when family members stood and pointed to “their” window. A member of the Durkan family mentioned that her father was an electrician who was once responsible for illuminating the rose window. Major’s remarks focused on who the windows were dedicated to and who made the gift. Each testimony included a brief recollection of the family who resided in the village. Each story was a peek into the past through the stained glass windows.