Worthy of the Scroll 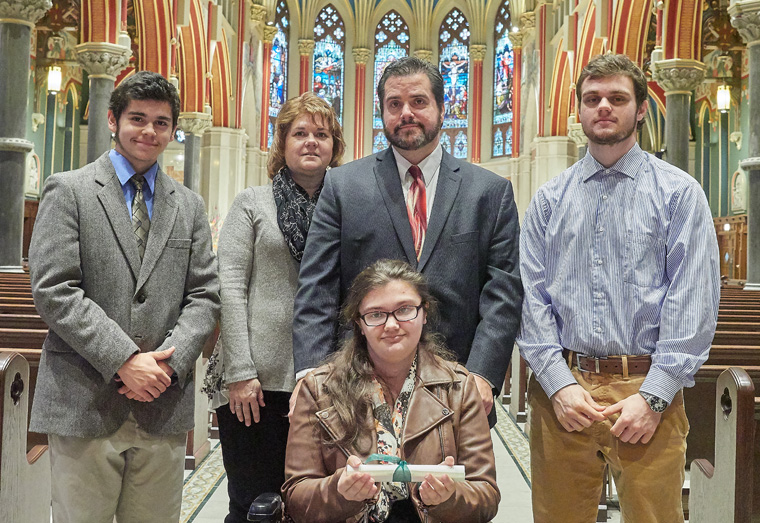 Story of stunning resilience highlights Year of the Family

Instead of sleeping in, Nicole got up very early to practice figure skating one day in August 2014. During practice she suffered a massive hemorrhagic stroke; had she been sleeping at the time, she may never have woken up.

On Nov. 18, Nicole’s family was among those present as Bishop Robert J. Cunningham celebrated Mass on the second to last Sunday of the Year of the Family at a packed Cathedral of the Immaculate Conception in Syracuse.

“I thought it made us feel special,” Nicole said.

With the publication of his pastoral letter, “Enriching the Church: The Role of the Family in the Life of the Church of Syracuse and Beyond,” Bishop Cunningham announced a special Year of the Family, which began in the diocese on Dec. 3, 2017. In his letter, Bishop Cunningham reflects on the mission of the modern family — evangelization — and how it can be accomplished by forming an “ecclesia domestica,” a “domestic church,” through prayer and worship, formation, community, and service.

“During this year, it is my hope that parishes will reach out to parents and families in new and different ways that will result in a growing desire to know, live, and share the Catholic faith,” the bishop wrote.

The scrolls contain a blessing that says, in part: “Our Father, … we trust you will provide us with a deep love for each other.”

That certainly defines the Welch family. They were constantly at her side as Nicole lay in a deep coma. Today, she is a 17-year-old Liverpool High School senior. She uses a wheelchair but she has become fully independent, and she is getting ready to apply to colleges.

The Welches truly embody the focus of Christ the King Church in Liverpool, said the parish administrator, Father Zachary K. Miller: They support one another, help to raise everyone else up, radiate joy, project a “very nice mood,” always show respect, and always take a minute to talk.

Father Miller accepted the Welches’ scroll and then gave the blessing to the entire parish, formally closing the Year of the Family on Nov. 25. He said the parish held fundraisers for the Welches to offset medical bills, provided meals, and conducted a prayer ministry.

“We’re grateful to Father Zach Miller for selecting us to represent Christ the King Parish, all the families there,” said Nicole’s father, Michael Welch, an attorney who handles civil litigation. “This means a lot to our family. It’s a great honor, and we’re happy that we were all able to be together to do that.”

“We were basically told that it was a minute by minute situation as to whether she would survive the brain injury,” Michael said. “She had to have several emergency surgeries. As a result of that, she had an extensive recovery that wasn’t local; we had to be in Schenectady. At least one of us would be there nearly every day with Nicole. We’d take turns, go back and forth on the Thruway … so that she was never alone, whether she realized we were there or not.”

‘TO FURTHER FIND YOURSELVES’

“So in terms of hope,” Michael said, “our hope was obviously that we would still have Nicole, we’d have our family intact. But in a greater sense our hope is that we can become even closer, and I think … that’s what Bishop Cunningham was trying to indicate to everyone. …

“If you have hope, there’s always that opportunity to further find yourselves, further find love within your family and as a church.”

Nicole’s mom, Karen Welch, who works in development at the SUNY College of Environmental Science and Forestry, said that unknown to the family, Nicole had a birth defect called an arteriovenous malformation in her brain. Nicole had no symptoms, but the condition caused the hemorrhagic stroke.

In the midst of the crisis, Karen said, Father James C. Fritzen, now retired, always visited Nicole and prayed for her. The parish still supports her family, Karen said.

Father Miller encourages people to pursue athletics, he said, because it teaches discipline and, on a greater scale, how to be a family.

Nicole’s brother Robert, 18, is a freshman at Le Moyne College, where he is studying biology and thinking of becoming a physical therapist. He is a forward on the college’s club ice hockey team.

Asked how he helps his sister out, Robert said, “She supports me and James, my brother, more than anything. So when this first happened back in 2014, we were really upset about it. We were living with my grandmother in Utica. … I think we’re honestly inspired by her, what she’s done. … To see her work hard and just dedicate her time to her studies and her rehab, it’s just inspiring for me and my brother.”

James, 13, is an eighth-grader at Liverpool Middle School. He is a hockey goalie for Lysander and Liverpool High School. It was inspiring to see his sister start to recover and gain a lot of strength, James said. He remembers the family “picking each other up when we were down.”

“I always try to hope for the best,” James said, “look at the bright side of things.”

Fortunately, Michael said, Nicole “now is able to do many things which they never believed that she would ever be able to do again, including speaking, eating, and then just the mobility of it in terms of her ability to use her upper extremities, and now working on the lower extremities. It’s miraculous — nothing short of that.”

“When our families are strong,” Bishop Cunningham told the congregation, “so too is our diocese. Keep going forward in walking together. Have courage. Encourage one another. Remember that prayer and worship, continued formation, community, and service are time-honored and practical methods for strengthening your own domestic church.”