They yell ‘Mr. Oscar!’ at Christmastime in Colombia 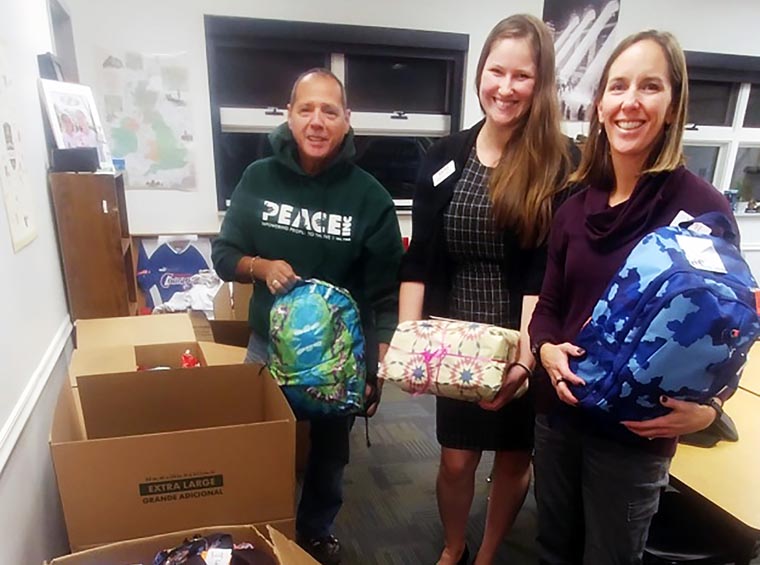 Ludden coach brings boxes and boxes of gifts to needy

The soccer coach made the save.

In the darkness outside Manlius Pebble Hill School, three huge boxes destined for needy Colombian kids started to tip off the hand truck pushed gamely by Oscar Vergara. MPH girls varsity soccer coach Pat Bentley Hoke jumped in like a goalie rushing into the corner of the net and prevented a Christmas calamity.

“There’s nothing like it,” Bentley Hoke said of Vergara’s “Project Smiles,” which for 16 years has delivered boxes filled with clothes, toys, personal-grooming items, and other treats to children in Vergara’s hometown of Medellin, Colombia. The city is in a valley surrounded by mountains.

Vergara, MPH, Bishop Grimes Junior-Senior High School, and Vergara’s friends Beth and Steve Sloane combined to fill 21 boxes. Then Vergara and his brother, like dual Santas, drove a truck through the snowy night to New Jersey to ship the boxes. And last week, as he always does, the bilingual Vergara flew to Colombia to open the boxes for the kids.

They yell, “‘Mr. Oscar! What’s it say here? Can you translate this?’” They might be referring to items such as shampoo or hair conditioner.

“Just going there and seeing the smiles on their faces — you can’t put a price tag on that, really,” he said. He added: “I’m like an ambassador. I’m trying to tell people that this is what the American people are doing for you, and for your kids.”

This year the boxes are going to two classrooms with kindergartners through second-graders. In the past, Vergara even helped five Colombian “group homes,” which are residences for children who have been abused or abandoned. He has had to cut back, because he retired after 19 years as director of Big Brothers Big Sisters of Onondaga County. Retirement lacked something, so now he draws part-time pay as coordinator of activities for senior citizens at the Eastwood Community Center, a program of Peace Inc. He is also Bishop Ludden High’s boys soccer coach.

The Eastwood seniors donated $100 to Project Smiles. “We think it’s a worthwhile thing to do,” said Kay Denison, treasurer of the advisory council for the community center. “We’ve helped him with shipping, which is a big expense.” She has a necklace with a cross and bracelets that the Colombian children gave her in return for her generosity in the past.

Vergara used to live in Medellin before he came to Syracuse and entered Bishop Ludden thanks to a scholarship granted by retired Auxiliary Bishop Thomas J. Costello, who was then a monsignor and the diocesan superintendent of schools. That’s how Vergara got out of the at-risk environment in his hometown.

But for those who live in the Colombian group homes, this is the routine: Eighty to 90 kids on a Saturday morning line up to clean up, wash their hair, and brush their teeth. They have to share the toothpaste. Then they do chores around the home.

“Once they turn 18 they have to leave the home,” Vergara said. “Hopefully by then, they would have finished high school” or picked up a skill such as hairstyling. “Some of them actually leave the homes and end up working as maids in some of the homes of people that have a better way of living, higher status,” he said.

His empathy for these children goes back many years. He remembers one particular Dec. 25 when he was in Medellin with one of his daughters. They went to Mass and on the way home saw a group of children in front of a kiosk, trying to buy little items. Each child in a group home receives 2,000 pesos — about 75 cents — for Christmas.

One girl, Luisa Fernanda, was crying because she did not have the 3,000 pesos for a bracelet. The girl looked much like one of Vergara’s daughters when she was seven years old. So Vergara told the nun who was in charge that he would like each of the 13 children to pick out two items, and he would pay for them. Plus, he bought Luisa Fernanda a jersey of her favorite soccer team, which happened to be his favorite team as well.

In return, the nun invited Vergara and his daughter to the home for lunch. Luisa Fernanda looked at him and said, “‘Why are you doing this?’ … She called me ‘Godfather.’ That’s what they all call me.”

Vergara then pointed to his own daughter and said the two girls looked so much alike. “And she looked at my daughter and she said, ‘Oh, no. She is such a beautiful girl; I’m an ugly child.’”

“Thus,” he said, “Project Smiles was born.” (Luisa Fernanda would be in her mid-20s now. She ran away from the home to reunite with her mother, who struggled with drugs. The nun saw the girl getting on a bus selling little boxes of gum to make money.)

MPH coach Bentley Hoke said Oscar comes home from Colombia and shows pictures of the kids opening their presents. Of her soccer team she said, “It’s just a thrill for the girls. … And it’s a wonderful sort of team-building thing too, to have this cause — bigger cause … outside of their own interests. And that’s how they are anyway — they’re a great team. So they love doing things that are going to benefit more than just themselves.”

MPH soccer player Rachel Comfort, a senior, went out and bought a shiny soccer ball, a soccer jersey, and a stuffed animal for a seven-year-old Colombian boy. “They’re going through a really hard time right now so … it’s great to have them know for this Christmas they’ll have a gift that will make them happy,” she said.

Her teammate Ana Videto, a sophomore, bought a summer dress, a doll, and coloring books for a six-year-old girl. Asked what she would be feeling if she received such gifts at that age, she said, “I would feel really thankful and know that people are there to support me, whatever I’m going through.”

Participants fill new backpacks with the presents. Katherine Murray, MPH’s assistant girls varsity soccer coach, said she and two colleagues bought items including a sundress and a doll with a carrier for a six-year-old girl. “We actually went with two [dresses],” she said, “because we went with one that she could grow into, and one that would be the proper size now.”

Over at Bishop Grimes, Spanish teacher Sharon Bearer, who has helped Project Smiles for many years, mobilized her 11 seniors and other members of the Grimes community. She feels it’s very important for the students to “understand how fortunate they are and that they have a responsibility to give back.”

“It’s nice to know that you helped make somebody’s Christmas better than it would have been,” said Grimes senior Kendall Mancuso.

“It was exciting to get a kid from Colombia that you don’t even know but you’re doing something nice for them. It felt good,” said classmate Emily Cone.

A love for soccer

Another Grimes senior Spanish student, Sarah Mantz, said, “Sending backpacks to kids in Colombia is a perfect way to help out some Spanish speakers. … It feels nice to be able to help someone. You’re never going to meet that person. But you know that you’re going to make their day or their month or their year a little bit better just sending them some pretty simple stuff.”

Utica College sophomore soccer forward Thomas Muller, who already has eight goals and a couple of assists in his two years as a starter, participated in Project Smiles when he played soccer for Vergara at Bishop Ludden. As a Gaelic Knights senior he was named the player of the year in his league and he also made the All-CNY team.

Muller remembers stuffing a backpack for an eight-year-old Colombian kid named Luis. He included a soccer shirt, shin guards, colored pencils, and coloring books. “I just fell in love with it when I was younger,” he said of soccer, “and I’m guessing he did the same.”

It was a time when Muller was starting to get rid of some belongings before starting college. So into the backpack went his size 12 or 13 purple soccer shoes — with a little wear and tear, but cleaned up and shiny.

“It was a real nice pair of shoes that if the kid wanted to, he could find somebody that would buy those shoes,” Vergara said. “But he … said, ‘No, no, this is from my friend, I’m going to keep them.’”

What if that kid Luis wins the World Cup someday and holds up a pair of purple shoes?