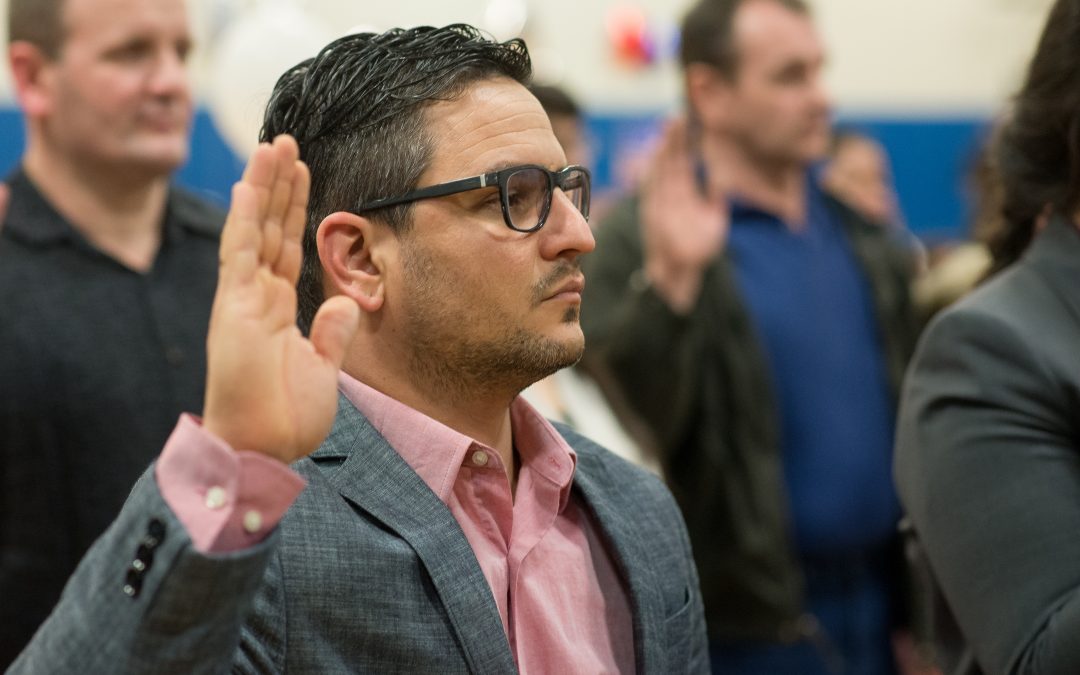 Joan Pablo Prieto came to Syracuse from Cuba after a friend told him about the community. He came, liked what he saw, and stayed. Five years later, he took the Oath of Allegiance during a Feb. 8 ceremony at Bishop Grimes Jr./Sr. High School in East Syracuse.

As friends and family looked on, Prieto and 60 other immigrants raised their right hands and pledged to “absolutely and entirely renounce and abjure all allegiance and fidelity” to any other nation. They committed to “support and defend the Constitution and laws of the United States of America against all enemies, foreign and domestic,” and confirmed they took “this obligation freely.”

Prieto, a machine systems engineer at Syracuse’s Eraser Company, said practicing Catholicism in his native country has become easier since the early years following the 1959 Communist revolution. But here, “it’s part of the Constitution: freedom of religion, freedom of speech.”

All the new Americans, from 29 countries, have their own stories about how and why they came to America, the melting pot. Joy Li, a native of China, has lived in the United States since she was 7. She’s now a Cornell University student. Bakunda Salvator arrived in Syracuse in 2007 after fleeing war in Burundi. Both said they were thrilled to become citizens.

“Look upon these brave individuals and see the image of America itself,” Zachary Jones, student council president, said during the event in the school gymnasium. To the new Americans, he said, “We welcome you to the greatest nation on Earth: the land of the free and the home of the brave.”

Naturalization ceremonies are typically held monthly at Syracuse’s James M. Hanley Federal Building. They have been put on hold because of renovations. Hon. Thérèse Wiley Dancks, presiding U.S. Magistrate judge and a 1977 Bishop Grimes graduate, helped arrange for the ceremony to take place at her alma mater.

It was scheduled, a few months ago, as the concluding event in the school’s Diversity Day. It became a timely civics lesson amid a national debate about immigration. On Jan. 27, President Donald Trump signed an executive order that suspended the refugee program for 120 days, indefinitely banned Syrian refugees, and barred entry for 90 days for citizens of seven majority-Muslim countries.

The order spurred protests, including one at Syracuse’s Hancock International Airport, and court cases. In a special Mass Feb. 5, Bishop Robert J. Cunningham called “blanket refusals to allow immigrants from a given nation, ethnic or religious group to enter our country… un-American and un-Christian.”

Dancks declined to comment on the order and lawsuit, citing her position as a judge. But she said holding a naturalization ceremony at a school fits into her role on a judicial committee on civic education.

“I learned something myself in putting the program together,” said Dancks, a Le Moyne College and Syracuse College of Law graduate. “I usually just see them at the end. I learned all the steps they take to get here.”

Jones, the student leader, said that the president’s executive order and the controversy around it tied into the day’s agenda. “There’s only so much the general population can do to change this,” he said. “The best we can do is support each other in our diversity.”

Rustan Petrela, a native of Albania who works for the Onondaga County Department of Facilities Management, said becoming a citizen a few years ago fulfilled a dream. “I fell in love with this country,” he said. “Every American who is born here, like my kids, knows they are born here because of someone like you. They see in us the continuation of a chain of love.”

After the ceremony, Prieto hugged his wife, mother, and two friends. He met his wife, also from Cuba, in Syracuse. She arrived four years ago and plans to apply for citizenship next year. (Immigrants are eligible for citizenship after five years as permanent residents of the United States.) His mother also wants to become a citizen.

As the happy group celebrated, one of Prieto’s friends handed him a box wrapped in red and white striped paper. Prieto ripped open the package, then held up the gift: an American flag.