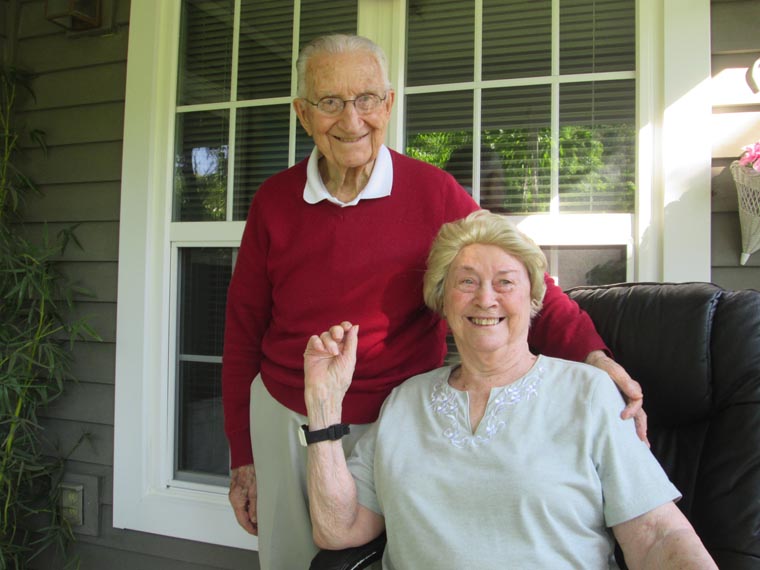 Upstairs at The Nottingham last week, someone played “As Time Goes By” on the piano. The song projected downstairs but did not spread to the adjoining wing where Luke and Ruth Pesane live. No matter — they need no musical reminders of the years’ passage.

Members of Immaculate Conception Church in Fayetteville for more than 50 years, the Pesanes are celebrated as the longest-married couple who signed up for the Syracuse Diocese’s World Marriage Day Mass in February.

Imbued with a childlike wonder at his longevity, Luke said he has been blessed: “I figure I’m a chosen one for Our Lord. I really do feel that way. And I’ve been blessed with all my faculties; my hearing — how many guys walk around my age without a hearing aid?”

Ruth, who developed a problem with her cognitive ability about six years ago, fell and fractured her ankle getting ready for the World Marriage Day Mass, and she is now in a walking boot. Luke wrote to Bishop Robert J. Cunningham apologizing for their absence, and the bishop wrote back: “Be assured of my prayers for both you and Ruth as she recovers. … The Lord has blessed you with many wonderful years of marriage. I pray for your good health and happiness.” The card from the bishop is now on a wall in their apartment at the senior living community in Jamesville.

Like many other people they know, Bishop Cunningham was curious about their amazing run together, asking them five years ago — on their 70th anniversary — what their secret is.

Quizzed by a visitor on that topic, Luke said, “We seem to get along. She’s easygoing to start with.”

Luke’s otherworldly youthfulness — one recent caller thought she was talking to his son — is matched by Ruth’s buoyancy. They have complementary laughs. Luke, a dapper former regional sales manager and entrepreneur, favors an economical sound: a couple of puffs, the second a little bit more pronounced. Ruth’s laugh is more expansive but brims with the same delight — one notices the big personality that caught Luke’s eye at a dance hall across from the Haberle Congress Brewing Co. in Syracuse in the mid-1930s.

Luke revealed another secret: “Compromise. … You’re living with a person for that many years, you’re bound to have differences of opinion. … So if you don’t have a little flexibility in your marriage …”

The Syracuse University graduate summed up: “We just happened to be a good match and we’re still hanging around together.” Ruth loved that, laughing and clapping.

Also applauding is their pastor, Father Thomas Ryan. In an email, he said:

“Luke and Ruth are an amazing couple! They have been longtime, faithful parishioners of Immaculate Conception. I really think they found the ‘fountain of youth!’ Just two years ago, Luke worked on our Capital Campaign as a volunteer.

“They have a terrific outlook on life and it is centered on their faith and family. We are so proud to call them our parishioners and our friends and we join in prayerful best wishes.”

One family member, Patricia Burgess of Detroit, said this about Luke and Ruth in an email:

“I am proud to say that my parents have been both an inspiration and a gift.  Their longevity in both health and marriage is something to be admired and appreciated. Not only are we fortunate to have them this long in life, but it has also been so special to witness their unending love, respect, and commitment to each other — no matter the difficulty of circumstance. They are a true testament to the Scripture of “love is patient, love is kind.”

Ruth is originally from Solvay; Luke, from the North Side of Syracuse. In those days, Luke said, dance halls existed all over Syracuse. “Burnet Park used to have an outdoor dancing place,” he said. “Every Friday night, you’d go and dance under the stars. That was living. … On Friday nights, that was one of our stops. … That was the thing, and that was what young people did in those days.” “Stardust” was Ruth’s favorite song.

Ruth is proud that one of her grandmothers was a triplet. The couple is also proud of their family today. They have three children, five grandchildren, and three great-grandchildren.

Luke was always immersed in work. Even when he attended North High School, he had a job in a factory. His parents were from Italy, and his father spent a lot of time in Our Lady of Pompei Church when he was not doing his laborer job on a bricklaying team. “I’m very deep into faith, and I believe in it,” Luke said. He prays to St. Peregrine when his patience runs out.

Luke was working in the factory just before World War II broke out. He married Ruth in 1942 but was drafted in 1943. He served with the Fourth Air Force in Spokane, Wash., for three years. Gifted with a clear, firm speaking voice, he was a classification specialist, interviewing recruits to determine which Air Force school they should attend in order to learn the skills to build airstrips overseas.

Even then, Luke sought self-improvement. He made corporal in six months so that he could send for Ruth and live off the base with her. “The military changed my whole life,” he said.

It allowed him to attend Syracuse University on the GI Bill. Again, he had a job outside of school, so he never got the flavor of campus activities or fraternity life.

He earned a bachelor of science degree in sales management and psychology.

A lifelong realist, he knew that an undergraduate degree in psychology would not lead to a position as a personnel manager. So he launched a 30-year career in sales. He designed business forms and rose to regional sales manager for Moore Business Forms.

“I was only 58 when I retired. … I stayed retired three days,” he said. He then opened his own business as a headhunter, conducting executive searches.

“I had my own office!” he recalled. “Don’t knock it — that’s one of the best jobs there is in the world! … If I had my choice I would have done that when I was 40, in the big cities, not in a little city like Syracuse. You make big bucks.”

He did that for 10 years before really retiring. But it’s tough to totally leave the game. For six years in his ninth decade, he served as a mentor to students at the Syracuse University Whitman School of Management. He advised them how to “go out in the cruel world” and interview for jobs. He told them to dress for the occasion and to avoid overselling themselves.

Luke loves education and wishes he had more of it. He figures that helping him stay alive is all his medical reading. In addition to a few prescriptions, he takes supplements based on his research. If he could be a medical doctor, he would be a doctor of alternative medicine. “I’ve learned so much in 100 years,” he said.

Asked if his two sisters — Patricia and Susan Korzeniewski, of Liverpool — and he expect to live to be 140, given their parents’ ages, Jim said, “I don’t really want to live that long.”

Jim was a pharmaceutical representative for a number of companies for almost 50 years. He also spent 26 years in the Army between active duty and the Reserve, and he retired as a lieutenant colonel 14 years ago.

His hobbies are boating, hiking, hunting, and fishing. He said, “I’m not a big golfer — takes up too much time.”

There’s that topic of time again.

Even that need not be an extreme worry for those who crave work.