A blessing of blankets 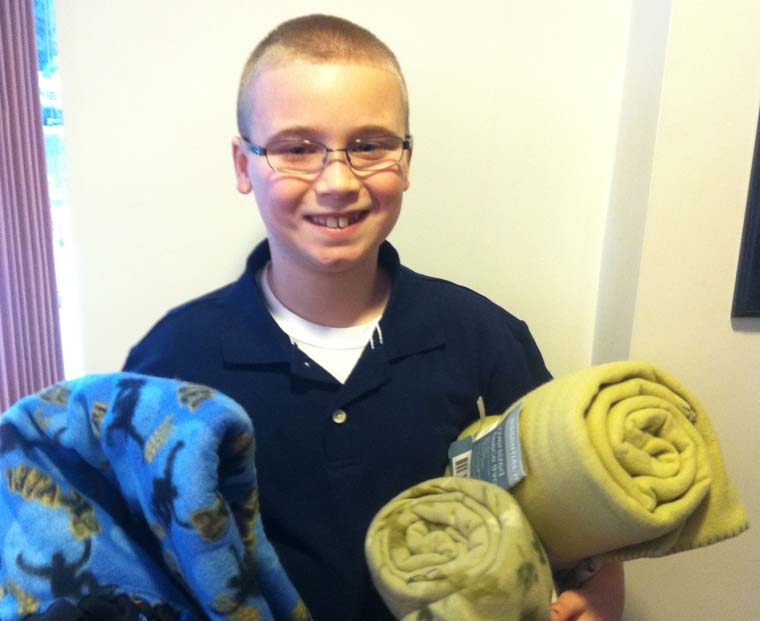 Damon Villnave Jr., or DJ, as he’s known to his family and friends, is one busy kid during the month of January. The 11-year-old student at Gillette Road

Middle School and altar server for Sacred Heart Church in Cicero has spent the entire month of January for the past five years collecting blankets for the homeless. To date, DJ has collected more than 2,500 blankets for the Gift of Warmth program he began when he was just 7 years old.

“I started collecting blankets after I saw a news program on how homeless people got frostbite during the winter because they were cold. I thought, ‘I have a warm blanket and I can give it to someone so they won’t get frostbite.’ So I talked to my parents and my principal and I started collecting the blankets at my school and the blanket drive just took off,” he explained.

DJ decided to donate the blankets he collected to the Syracuse Rescue Mission.

“I wanted to keep the donation local because there are so many people in our area that could really benefit from having a warm blanket,” explained DJ. He chose the month of January since it’s after Christmas and, according to DJ, “People are still in a giving mood and want to give back to the community.”

That first year of the collection, DJ, then a second grader at K.W.S. Bear Road Elementary, was hoping to collect 40 blankets to donate to the Rescue Mission; he collected nearly 300 blankets. After the first drive was completed, DJ decided to make it an annual event. Although DJ now attends middle school, the drive continues at his school and his previous school with help from his two sisters, Grace, 7, and Brenna, 8.

“Once I started to go to Gillette Road School my sisters agreed to keep collecting blankets at their school,” stated DJ. “It’s been a great way to expand the drive, and I also collect blankets at my church, Sacred Heart too. I think people see others giving to the blanket drive and they want to help too.”

This year, DJ plans on collecting a record number of blankets for the homeless.

“I have already collected 700 blankets for this year’s drive but my goal is at least 1,000. If I can collect that many [blankets] it will help keep a lot of people warm,” explained DJ.

Collecting blankets, according to DJ, is a worthwhile endeavor but it’s an involved one as well. Working with his parents, Damon and Sara Villnave, and his sisters, DJ makes sure each blanket is sorted and counted and then bundled up for distribution to those in need.

What keeps DJ focused on the drive year after year? He has had great role models.

“My Dad never gives up on anything,” stated DJ proudly. “He’s the example of never giving up. Sometimes I don’t want to count the blankets but he always thinks I can do it and because he doesn’t give up, neither do I.”

Over the years, the blanket drive has brought special recognition to DJ from community organizations and the media. He has won service awards and been featured in numerous articles and on television, but quickly shrugs off any personal acknowledgement, determined to keep the focus on the drive and on the community.

“It’s not just me collecting the blankets,” explained DJ. “It’s my family, it’s my peers, my friends, my Church —  everyone helps and that makes me happy because I know the blankets are all going to a good cause.”

Although DJ is a familiar face at the Rescue Mission he has never met anyone he has collected a blanket for and he prefers to keep it that way.

“I want to keep the donation anonymous,” stated DJ. “Helping others is very important and it’s something that everyone in the whole community is doing, not just me.”

When he’s not organizing the blanket drive, DJ enjoys playing football and basketball and he wants to be a sportscaster when he grows up. But no matter what his future brings, DJ is certain he will continue to collect blankets for the homeless.

“I’m never going to stop collecting them, even when I get older. Why should I stop? There will always be people who will need a warm blanket.”

Those interested in donating new or gently used blankets can do so until the end of January at Sacred Heart Church, 8229 Brewerton Rd., Cicero; Gillette Road Middle School, 6150 South Bay Rd., Cicero; and K.W.S. Bear Road Elementary School, 5590 Bear Rd., North Syracuse. DJ also has a Facebook page, DJs Gift of Warmth, and can be found on Twitter at #makinadifference.