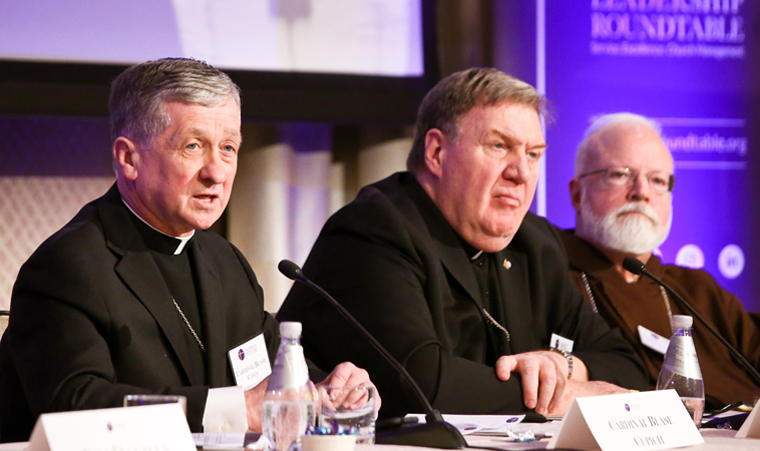 In an interview with Catholic News Service, Smolik frequently referred to these “twin crises.”

The Leadership Roundtable was founded in the wake of the 2002 abuse scandal in the Archdiocese of Boston, which was making near-daily front-page headlines.

It was officially formed in 2005 by lay, religious and ordained leaders to help the church address the abuse crisis and promote best practices and accountability in all areas. It has been working since then to help dioceses address leadership and governance issues. But not every diocese leapt at the chance at that time.

However, with the issuance of a grand jury report last summer by the Pennsylvania attorney general’s office on six dioceses in the state on alleged abuse by clergy and other church workers over a 70-year period beginning in 1947, and and how bishops responded to the allegations there, more dioceses have expressed an interest in what the Leadership Roundtable has to offer.

“In the past six months, we have received requests from over 50 dioceses,” Smolik said. Prior to that, she added, “we have been working closely in the last year with approximately 50 dioceses — this is a different 50 than what I was referring to before, although there is some overlap.”

Depending on how much overlap there is, of course, this would represent roughly half of all U.S. dioceses now looking to make internal improvements in their governance.

In early February, the Leadership Roundtable convened a two-day closed-door summit in Washington on the issues that have swirled around clergy sex abuse. A month later, it issued a report detailing dozens of recommendations for adoption by dioceses, bishops, clergy and laity.

In her preface to the report, Smolik said, “United, we must address the root causes, as well as promote a new culture of leadership and a new response to abuse. The underlying conditions creating these crises were decades in the making; solving these problems will require a long-term, culture change that must begin with immediate steps, putting survivors first.”

One recommendation calls for committing to “a preferential option for abuse victims and families; make it a priority to meet with survivors; keep survivors, families and affected parishioners at all levels of decision-making.”

Asked by CNS what would constitute a culture change within the church, Smolik replied it would be one that “addresses a new culture of a new collaboration between clergy and laity. It creates a plan for co-responsibility — lay and ordained, nationally and in the diocese — to address these twin crises.”

Clericalism and the lack of bishop accountability, transparency and co-responsible governance structures are “root causes” behind the crisis that need to be addressed in order to bring about culture change, the report said.

Bishop W. Shawn McKnight of Jefferson City, Missouri, a summit participant, has said clericalism occurs when a member of the clergy — be it bishop, priest,or deacon — uses his position in the church for personal gain.

Cardinal Joseph W. Tobin of Newark, New Jersey, another summit participant, expressed his hope in a February message that the Vatican’s abuse summit held later that month — bringing together the heads of bishops’ conferences worldwide — would result in a “a revolutionary flourishing of a church of synodality” much like that which happened at the Second Vatican Council.

“We were aware of Cardinal Tobin’s statement and at the (Leadership Roundtable) summit, we addressed the topic of synodality,” Smolik said. “We support the cardinal’s statement and the co-responsibility that we have been promoting for 15 years. We believe that co-responsibility is one of the key ways forward to address the twin crises,” she added.

In the wake of the Vatican summit, Smolik said, “we believe it’s now up to the bishops’ conferences to hold up both of these crises as equally important.”

For the U.S. Conference of Catholic Bishops, the document included a 10-point plan for USCCB leaders, which included considering using lay experts to revise the “Charter for the Protection of Children and Young People,” and implementing stronger formation programs for bishops and clergy.

Other recommendations include: Explore different models of training for new bishops; develop a mentoring system for bishops; rethink models of seminary formation to address disparities between institutions; revise the theology of priesthood and priestly identity to reflect servant leadership; revise the Plan for Priestly Formation and seminary curriculum to address the root causes of clericalism by equipping priests with skills in shared leadership, transparency and accountability; and commit to and convene truth and reconciliation commissions concerning sexual abuse and cover-up, locally or nationally.

Smolik suggested some examples of structural change, both locally and nationally.

At the diocesan level, she said, one recommendation is to “revise seminary curriculum. Equip seminary leadership with transparency and accountably. That would create a structural change in the church at the seminary level. … Over time, that would change the leadership structure.”

On a national level, Smolik said, something that was discussed at the Vatican’s summit was to “establish a … national structure of laity assessing bishop complicity. That is a structural change we would support.”

Some of the key concepts undergirding the recommendations listed in the report were: “There are twin crises that need twin solutions; silence is no longer an option; there is an urgent need for bishops to act now; at the heart of all abuse is an abuse of power; we should not conflate authority and power; there has been a failure to call clergy to accountability; everyone needs to be at the table — a diverse range of clergy and laity, including bishops and religious, mothers and fathers”; and “any reforms need to address both the heart and mind. There is a need for moral integrity and spiritual conversion, as well as procedural and structural change.”

“We are seeing it in their last meeting (of the USCCB in November) and we are seeing it again in June,” she added, referring to when the bishops meet June 11-14 in Baltimore.