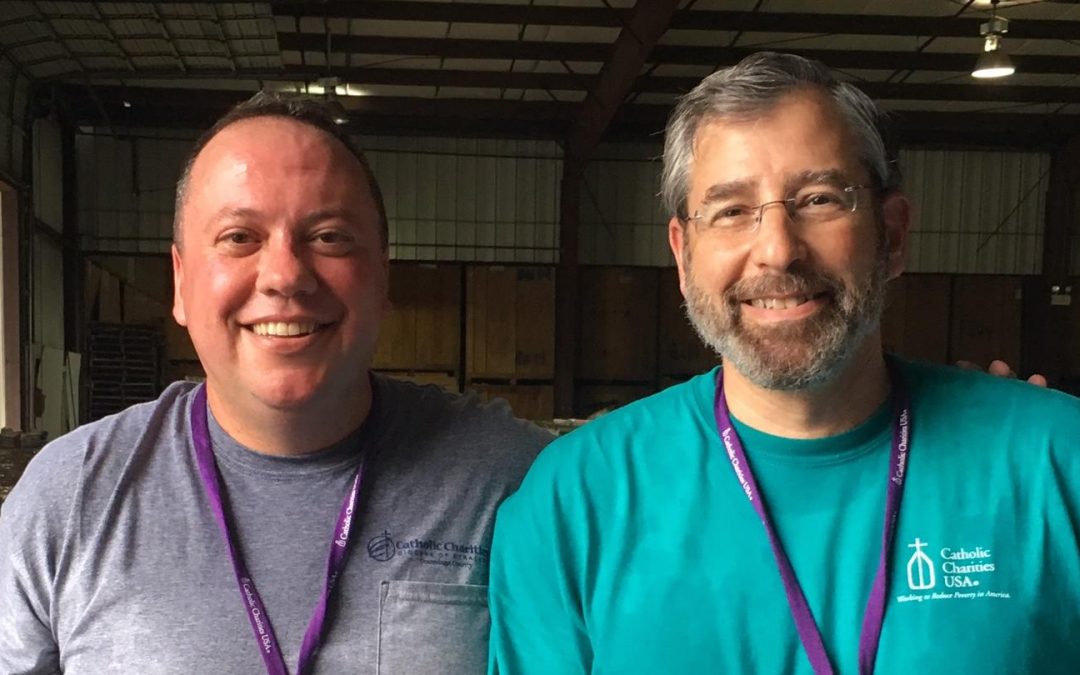 “We had intended to go to Texas, to Houston, to teach others about something,” Mike Melara said. Instead, “we went to Texas and we ended up learning — learning something about disasters and the human spirit and the role we can play in comforting people.”

Melara, executive director of Catholic Charities of Onondaga County, and Chris Curry, chief program officer for the organization, were looking forward to traveling to Houston, Texas, for Catholic Charities USA’s long-planned Annual Gathering Sept. 27 to 30. They were going to present two workshops at the national meeting, highlighting their agency’s experience launching two successful social ventures: the Culinary Arts for Self-Sufficiency program, which offers recent refugees and those living in generational poverty training in professional cooking, and Project Joseph, which trains recent refugees and men who are homeless in property maintenance.

With their workshops eliminated, Melara and Curry had to decide if they would still make the trip to Texas. “It was easy for us — we still wanted to go and we mostly wanted to go now to be able to participate in the disaster relief work,” Melara said. About 500 participants made the same decision, assisting in the efforts coordinated through Catholic Charities of the Archdiocese of Galveston-Houston, Melara estimated.

Melara and Curry spent their first day of service as part of a group of 55 tasked with sorting donated goods in a large warehouse. Volunteers prepared boxes of food, packaged up personal care items, organized cleaning supplies. Melara and Curry tackled diaper duty, breaking down pallets of baby necessities and reassembling them by size. The volunteers then loaded a truck with the sorted supplies.

The work was rigorous and the temperatures broiling, but “honestly, when you consider what everybody in that community is going through, spirits were high. People just wanted to help,” Melara recalled. 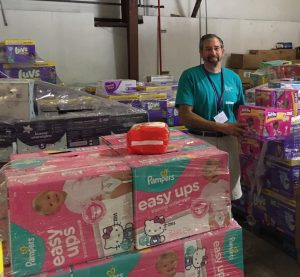 The following day, Melara, Curry, and other volunteers canvassed a small neighborhood about 30 minutes outside downtown, going door-to-door to assess residents’ needs and help connect them with support services.

“Mike and I did an intake on one woman, Maria,” Curry said. “She, her husband, and two kids had been living in a hotel since the storm. Their house was totally gutted.” The same was true across the neighborhood, he said — in front of every house there were piles of debris, drywall, flooring. “Everybody pretty much has to start from scratch.”

Once the volunteers made it through the neighborhood, a truck like the one they had packed the day before arrived and they began distributing goods.

“That was a powerful experience,” Melara said. “It was one thing to meet people where they’re at and assess what their needs are. It was entirely different to see them coming towards the truck, giving them food boxes, giving them personal care items.”

The last woman they served left a lasting impression on Melara. “You could just tell it pained her to have to get this kind of assistance,” he remembered. One of the speakers at the conference had offered a quote he attributed to St. Vincent de Paul, Melara said: serve long enough until the poor forgive you. “There was something about that exchange with her that made me think about that line… She’s just in this really horrid situation, and we happen to be in this place to assist her. I almost felt like I wanted to ask for forgiveness — that we’re ok and she’s not,” he said.

“One of the houses I walked a box to, I was apologizing, saying ‘I’m so sorry this happened to you,” Curry said. “They just built this new house six months before and didn’t have insurance… All I could think to do was apologize.” 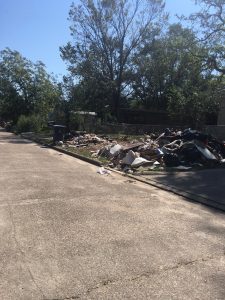 Volunteers canvassed this neighborhood outside Houston in September, assessing residents’ needs and helping to connect them to support. (Photo courtesy Chris Curry)

A school bus happened to arrive in the neighborhood while the volunteers were working. Seven or eight kids got off, looking like any other school kids, but walking into a neighborhood where the homes are uninhabitable, Melara and Curry recalled.

Sylvester Turner, mayor of Houston, spoke to those at the Gathering and shared a quote that came from his mother, Melara said. “‘God gives his best students his hardest tests.’ That seemed to kind of resonate with a lot of the work that Catholic Charities does, not only throughout the US, but certainly locally. There’s a value to being prepared and dealing with the hard test.

“We saw people in Houston encountering miserable situations and somehow still resilient, moving forward with their lives, friendly, engaged,” Melara said. “It’s just really humbling to witness that and play a very, very small part in trying to assist them.”

Contributions toward ongoing relief and recovery efforts in Texas can be made to Catholic Charities USA.