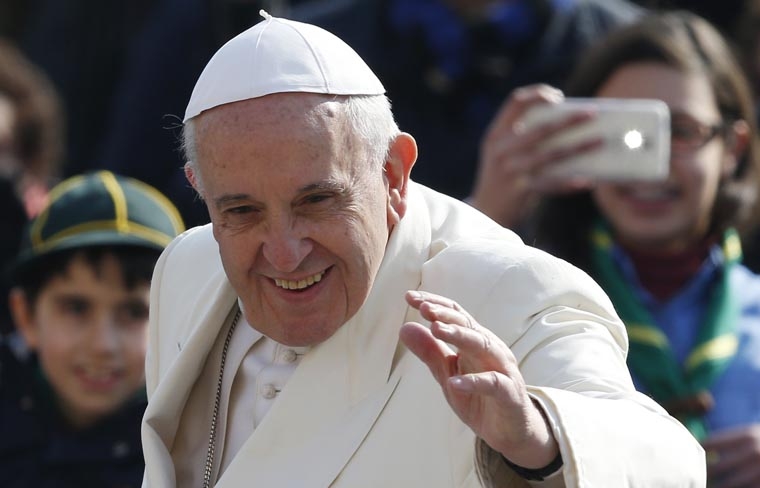 VATICAN CITY (CNS) — When Pope Francis went out onto the balcony of St. Peter’s Basilica for the first time, he said he did not prepare what he was going to say, but “I felt deeply that a minister needs the blessing of God, but also of his people.”

He did not know if it was right to explicitly ask the thousands of people in St. Peter’s Square to bless him, so instead he asked them to pray that God would bless him, he said. And he bowed for their prayers.

Marking the second anniversary of his election March 13, Pope Francis spoke about the conclave that elected him in 2013, about his life the last two years and about the future in an interview with Valentina Alazraki of Mexico’s Televisa.

The pope even joked about the reputation Argentines have for being proud or haughty. “You know how an Argentine commits suicide?” he asked Alazraki. “He climbs to the top of his ego and jumps!”

And, he said, while he doesn’t hate being pope, he is not a fan of the travel involved and he really would like to go out of the Vatican unrecognized, perhaps “to a pizzeria to eat a pizza.”

“I have the feeling that my pontificate will be brief,” he said. “Four or five years. I do not know, or maybe two, three. Well, two have already passed. It’s just a vague feeling.”

Perhaps, the pope said, it is like the kind of trick a gambler plays on his mind by convincing himself — when he places a bet — that he will lose; when he does, he is not disappointed. “I do not know what it is, but I have the feeling that the Lord put me here for a brief time…. But it is just a feeling. So I keep the possibility open.”

Pope Benedict XVI’s discernment that he no longer had the energy to carry out the office and his decision to resign to a life of prayer was courageous, Pope Francis said, and it opened the door for popes in the future to do so with greater ease.

But, the pope said, he is opposed to setting an age limit, for example, 80, for a pope’s ministry. While for some theologians “the papacy is a sacrament,” he said he would not go that far, but “it is something special.”

Asked about reports that he received about 40 votes during the 2005 conclave that elected Pope Benedict, Pope Francis refused to answer, “although I could tell because now I have the authority to speak.”

As for the 2013 conclave, he said he had no inkling until the lunch break March 13 “when something happened,” cardinals started coming up to him and asking about his health. “When we returned in the evening, the cake was cooked. Everything happened with just two ballots. It was a surprise for me as well.”

During the voting, he said, he was praying the rosary, which was his normal practice and brings him a great sense of peace. “The same thing occurred then, which for me was a sign that it was God’s will. Peace. And even today I have not lost that sense.”

The cardinals at the conclave interrupted his rosary when he had reached the two-thirds vote necessary to be elected. “They asked me if I accepted. I said yes. I don’t know if they made me take an oath, I don’t remember.”

Questioned about the 2014 extraordinary synod and the upcoming Synod of Bishops on the family, particularly regarding the acceptance of homosexual persons and Communion for divorced and civilly remarried couples, Pope Francis said some people have “unrealistic expectations,” but he is convinced God wants the church to focus on better serving families.

“The family is in crisis,” he said, and it is not the age-old crisis of infidelity, but the future of marriage itself.

“I think the Lord wants us to face this,” Pope Francis said, including through improved “marriage preparation; accompanying cohabitating couples; accompanying those who do marry and are raising a family; supporting those whose marriages have failed and are in a new union; preparing them for the sacrament of marriage, (because) not everyone is ready.”

As for the reform of the Roman Curia, which Pope Francis said really was the “last (royal) court” existing in Europe, he said, “the appearance of a court can be maintained,” but the Curia must be a group of people and structures “at the service of the church, at the service of the bishops.”