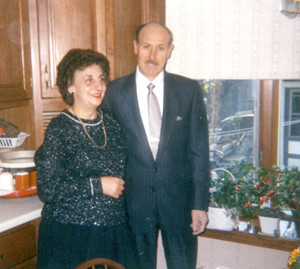 Anthony and Rose Geremia celebrated their 50th wedding anniversary on August 1st. They were married at St. John the Baptist Church in Syracuse.

Father Theodore Sizing officiated. Tony was also known as Tony G. and Mr. G. on the job. He began his career 40 years ago with the Zirilli Paint Co.

Later he worked for O’dai Painting Co. and Central City Painting Co. He was responsible for all the work done at the new Sibley Dept. In 1987 he received the Syracuse Builders Exchange Craftsmanship Award in recognition of Outstanding Craftsmanship Exhibited in Multi-Color Schemes and Graphics Executed at Extreme Heights on Scaffolds at the Cathedral of the Immaculate Conception in Syracuse. He was also responsible for the painting and decorating at St. John the Evangelist Church. He retired from the Syracuse Painting Co. Rose left her job at General Electric Co. to raise their four children. Their children include son Francis (wife Patricia), son Thomas (wife Desiree), daughter Mary Angela (husband John Boyle) and daughter Joanne (husband James Weimar). They have been blessed with 11 grandchildren.