Archbishop: Family ministry is giving more love to those most in need 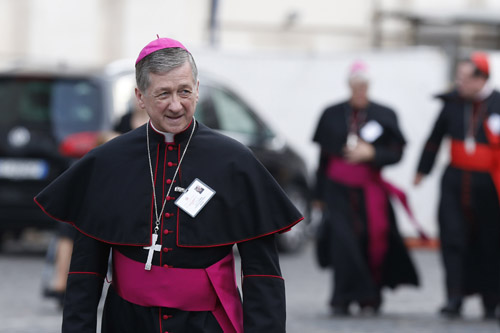 VATICAN CITY (CNS) — Chicago Archbishop Blase J. Cupich told reporters that something his mother once said might give the Synod of Bishops a way to balance the need to affirm church teaching while reaching out to those who are struggling.

The archbishop said Oct. 16 that his mother was asked if she loved one of her nine children more than the others. “Only if they need it,” she responded.

“That’s the way mothers speak,” the archbishop said, and that is the way the church needs to speak to families, especially to those who feel excluded or in need of extra attention. “The greatest contribution bishops can make to families is to act and speak like families act and speak,” he said.

At the same time, he said, the Catholic Church cannot “accompany, integrate and reconcile” people whom it does not know and with whom it is incapable of communicating.

“If we are going to really accompany people, we have to first of all engage them. In Chicago, I visit regularly with people who feel marginalized, whether they are the elderly or the divorced and remarried, gay and lesbian individuals, also couples. I think that we need to really get to know what their life is like if we are going to accompany them.”

But underlying all the outreach activity, he said, “We have to believe in the mercy of God and the grace of God to trigger conversion.”

The questions of ministry to homosexuals has come up in the synod, Archbishop Cupich said. “That discussion, it is clear to me, needs to mature in the life of the church. If we are really going to accompany people, we have to first of all engage them.”

“The words accompaniment, integration and reconciliation continue to be repeated in the synod,” he said, and the church needs to find a way to transform those words into real action on behalf of all people, including people who are gay or the divorced and civilly married “or other people who feel disenfranchised.”

On the issue of finding possible ways to lead the divorced and civilly remarried back to full participation in church life, including reception of the sacraments, Archbishop Cupich said synod members have been clear in their positions and those positions are diverse. Some, like the German bishops, see it as an urgent obligation for the church while others say it is impossible without weakening church teaching on the indissolubility of marriage.

The divorced and remarried, he said, must be ministered to on “a case-by-case basis.”

General principles are essential, he said, but ministry — like a mother’s love — adapts to meet the needs of real-life situations.

Some Catholics need their bishops and priests to speak clearly and firmly, while others need their ministers to demonstrate humility and a desire to search together for the best way to live out God’s call, he said.

The pull of those two demands is something the archbishop said he has felt for 40 years as a priest. Archbishop Cupich added that he had an archbishop friend who claimed he wanted his tombstone to read, “I tried to treat you like adults.”

“We really do have to have an adult Catholic response to living the Christian life. That is, I think, where the Holy Father is leading us. We have the means by which we can help people come to decisions — important decisions — about how they live their Christian life” through prayer and discernment.

Religious education “cannot be just about giving people the fixed doctrines,” he said. It must also show them “the path the church has outlined for making prudent decisions. We have documents that really do help us do that,” including a document from the International Theological Commission from 2009 on natural law and moral decision-making.

In a section on “The moral dispositions of the person and his concrete action,” the document discusses the formation of the conscience with an explanation of moral norms, but also how the person must be helped to apply those norms in his or her real life.

“We can’t just refer to doctrines as though they are syllogisms that we deduce a conclusion to,” Archbishop Cupich said. “There has to be the integration of the person’s circumstances, case by case.”

Asked if the case-by-case approach also applies to pastoral ministry to homosexual persons, the archbishop responded: “Gay people are human beings, too, and they have a conscience. And my role as a pastor is to help them discern what the will of God is by looking at the objective moral teaching of the church, yet at the same time helping them — through a period of discernment — to understand what God is calling them to at that point.”

“We have to make sure that we don’t pigeonhole one group as if they aren’t part of the human family, as though there is a different set of rules for them,” he said.