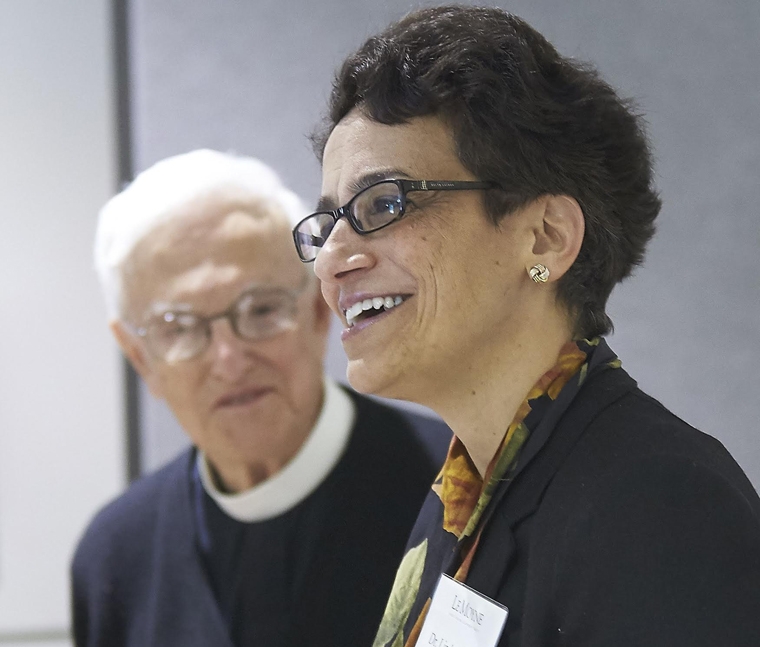 LeMura will talk about the meaning of the Jesuits’ four-word motto during her March 20 inauguration as the college’s 14th president. Inauguration events also include a concert, receptions and Mass.

Father John Cecero, a Jesuit priest who is the provincial of the Northeast Province of the Society of Jesus, will be at the ceremony as she formally begins her mission as president. The role is considered an educational apostolate.

She is a native of Syracuse, the daughter of Italian immigrants. She attended Our Lady of Pompei School (now Cathedral Academy at Pompei) on Syracuse’s North side from pre-K to eighth grade and graduated from Bishop Grimes High School in 1978. She attended Niagara University, where she played basketball, and earned her master’s and doctorate degrees at Syracuse University.

Her job has featured a whirlwind of meetings and travel — including a trip to the Vatican — since she started July 1. She was in Rome in September as a guest of the Secretariat for Jesuit Higher Education for the 200th anniversary of the restoration of the Society of Jesus. She was among 100 people at a Mass celebrated by Pope Francis, but she did not get to meet him.

“I was so close to being acknowledged,” she said. “I’m not going to give up on it.”

She describes her first few months as president as a study of Le Moyne’s place in the Syracuse area, in the Jesuit order, and in the local and global church.

“Le Moyne is really the bedrock of the community,” she said. “Many of our alums serve as doctors and lawyers and public officials and start businesses here. I couldn’t imagine this region without Le Moyne.”

More than a third of alumni live within an hour’s drive from Le Moyne upon graduation, college officials said.

LeMura sees an important role for the college as the Catholic Church works to stay relevant amid great societal changes and the rapid growth of secularism. It’s appropriate for Le Moyne to participate in discussions of hot-button issues, and she’s addressed how the college might do that when she meets every semester with Bishop Robert J. Cunningham.

“There are some points of discussion regarding who we might invite to campus,” she said. “I assure him we are not interested in ideology, but in an exchange of ideas. He knows we are treating it as an education. We are in communion with the Church, but that doesn’t mean we can’t disagree.”

Her leadership comes as some parents and students question the value of a liberal arts education in a competitive job market. It’s not an either/or question, LeMura said.

“They’re not mutually exclusive,” she said. “We want to provide education for the first job and the next 10.”

For an example of Le Moyne’s educational tradition adapting to meet business opportunities, stay tuned for news of the college’s collaboration with a local business in the environmental sector, she said. The announcement — she would not say when or with whom — coincides with anticipation of the pope’s forthcoming encyclical on the environment.

Even as LeMura discusses how Le Moyne’s work connects with the world, she does not forget her own roots. Her experience as an immigrant family’s daughter rising to historic college president inspired a fundraiser to benefit her elementary school.

On Thursday, March 19 at 9 a.m., the college is holding a 1.4-mile campus run, starting at Grewen Hall. (Look for the AMDG on the building.) Suggested donation is $10, and proceeds will benefit Cathedral Academy at Pompei. LeMura will participate in the run.

The college is also collecting books for Pompei pupils.

“That school gave me the opportunity to succeed, and I will be forever grateful for that,” LeMura said. “I want this generation of immigrants to have the same opportunities I did.”

Barbara Carranti, clinical associate professor in Le Moyne’s Department of Nursing, went to high school with LeMura and said it’s typical of her longtime friend to remember her alma mater.

“It’s a great recognition of how families struggle, not just immigrants,” Carranti said. “Families want their children to have more than they had. College is not a foregone conclusion for all of our students.”

LeMura has changed little since the two graduated from Bishop Grimes in 1978, she added.

“She was gregarious, she was driven, she was friendly and remains so,” Carranti said. “She was a leader then and continues to be so.”

Since LeMura works in her hometown, lots of people are watching and rooting for her success, including her 86-year-old mother and many older women at her parish, Our Lady of Pompei/St. Peter’s Church.

“They are still so jubilant,” LeMura said. “So far, so good.”