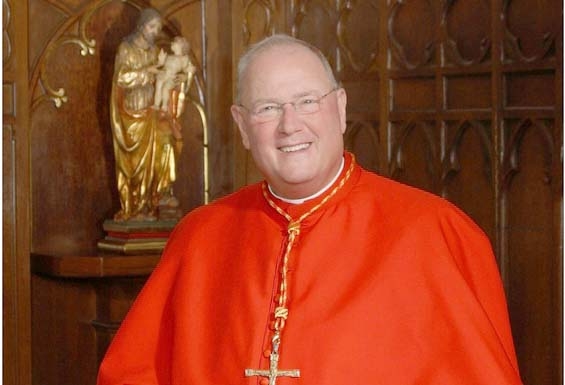 Timothy Cardinal Dolan, archbishop of New York, will be the speaker at Le Moyne College’s 65th commencement ceremony May 17, the college announced April 6.

“Cardinal Dolan’s record of leadership and service to the Catholic church in the U.S. and internationally is truly impressive and we are honored to have him as our speaker,” Le Moyne President Dr. Linda LeMura told the Sun via email April 7. “Le Moyne has a long history of influential members of the church speaking at commencement, and Cardinal Dolan is another example of this.”

Cardinal Dolan will receive an honorary degree at the ceremony, as will Lois Whitman, MS, JD, and Father David Ciancimino, SJ.

The recipients “have records of accomplishment that we hope our graduates will emulate,” LeMura said. “Lois Whitman’s lifetime of service combatting one of society’s most troubling issues — child abuse — is inspirational, and her body of work knows no boundaries, as she has fought for children’s rights around the globe. Father Ciancimino has an impressive career working with and serving as a role model for young men and women at a number of Jesuit institutions.”

What is Le Moyne hoping Cardinal Dolan will impart to the graduates in his address?

“I admire anyone who dedicates so much time — in the Cardinal’s case nearly 40 years since he was ordained as a priest — serving an institution, so I hope he speaks to our graduates about the importance of dedication, commitment and love for a chosen vocation,” LeMura said. “I would also like to hear him speak about how important faith has been to him, and how that faith has impacted him personally and professionally. I know that the Cardinal also has a lovely sense of humor, and our students will see that faith and joyfulness are completely compatible.”

Le Moyne offered profiles of each recipient in its release:

Cardinal Dolan was installed as archbishop by Pope Benedict XVI in 2009 having previously served as archbishop of Milwaukee, rector of the Pontifical North American College in Rome and auxiliary bishop of St. Louis. He also served as president of the U.S. Conference of Catholic Bishops, as a faculty member in the Department of Ecumenical Theology at the Pontifical University of St. Thomas Aquinas, chairman of Catholic Relief Services and as a trustee of The Catholic University of America.

Whitman is a human rights activist and founder and director from 1994 to 2012 of the Human Rights Watch Children’s Rights Division, which investigates and seeks to end human rights abuses of children around the world. She has conducted human rights investigations in many nations, including Turkey, Greece, Northern Ireland, Macedonia, Romania, Bulgaria, Liberia, Jamaica, Cuba and Sri Lanka. She has testified before the U.N. Committee on the Rights of the Child and U.S. Congressional committees. Whitman has taught at Hunter College, Stony Brook School of Social Work and Columbia School for International and Public Affairs. She received a bachelor of arts from Smith College, a master’s degree in social work from Columbia University and a law degree from Rutgers University.

Father Ciancimino is the former provincial superior for the New York Province of the Society of Jesus. A Brooklyn native, he entered the Jesuits in 1978 and was ordained a priest in 1988. He earned a bachelor’s degree from Fordham University in philosophy and graduate degree in theology from the Weston Jesuit School of Theology in Cambridge, Mass. Father Ciancimino has served as headmaster at his alma mater, Xavier High School in Manhattan; was principal at Canisius High School in Buffalo; and taught modern language and theology at both Xavier and Canisius high schools.