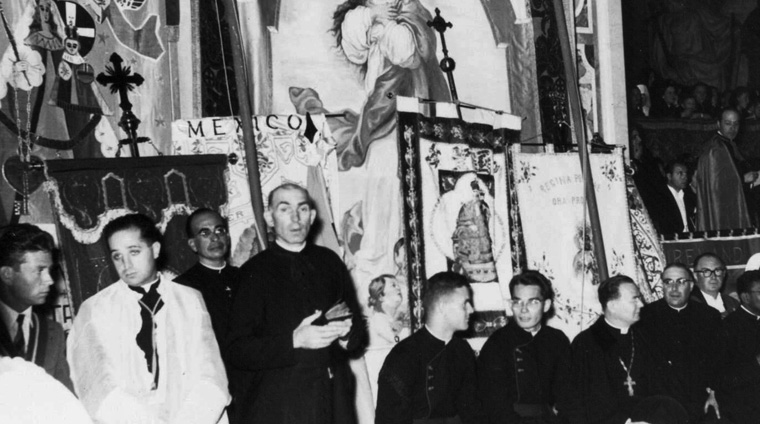 He approached throne with classmate, and then …

Msgr. Joseph A. Ranieri of the Archdiocese of Washington was a classmate of Bishop James M. Moynihan while he was in Rome. Msgr. Ranieri has graciously sent a copy of the Catholic Sun of March 16, 2017, to all the surviving classmates of the bishop. I read the issue with great enthusiasm and pleasure. Bishop Jim was a great, generous, talented person. I would like to share a story about him with your readers.

There were 70 young seminarians from many dioceses in the United States who were sent to Rome in the fall of 1954 to be residents at the North American College. This was the Pontifical seminary sponsored by the hierarchy of the United States. We were residents at the college and we attended classes in theology at the Pontifical Gregorian University along with students from many countries in the world.

1954 was a Marian Year. It was scheduled to close on the Feast of the Immaculate Conception. Marian shrines from many nations had commissioned banners to be presented to the Holy Father, Pope Pius XII. The banners represented the devotion of Catholics everywhere to the Mother of God. They were varied and beautiful.

The Shrine of the Immaculate Conception in Washington, D.C., had fabricated a huge banner depicting Mary’s sinless being. It towered over the banners from the rest of the shrines.

As the distance was rather lengthy, the pole-carrying men had to be replaced every mile or so. As we ascended the steps leading up into the long nave of St. Peter’s, six students were ready to enter the church; but the Vatican had only provided two tickets for each banner (most had only one or at best, two poles).

As a consequence our fellows with the ropes were dismissed. That left James Moynihan, of Rochester, New York, and Tim Gollob, of Dallas, Texas, to struggle down the long nave (luckily there was no wind to contend with in the church) to a pew directly across from the throne where Pope Pius XII was sitting.

During the Mass there came the time when each nation’s banner was toted up to be blessed by the pope. Assisting monsignori took charge of the poles and Jim Moynihan and Tim Gollob knelt before His Holiness (who spoke very good English). We were asked how we were doing in our studies and where we were from and how our families were doing. We were in a state of shock and could only blurt out “We are behind you, Holy Father!”

And I think that occasion helped to make Bishop Moynihan into the loyal follower of the magisterium and a devotee of the Mother of Jesus.

At least that is what I read into the articles praising your beloved deceased Bishop.

Father Tim Gollob, of the Diocese of Dallas, Texas, was a member of the Class of 1958 at the North American College in Rome. He has been pastor of Holy Cross Church in Dallas since 1969 and he has written a weekly column for the Texas Catholic diocesan newspaper since 1966. He has “an interest in getting details of history together for future references.”