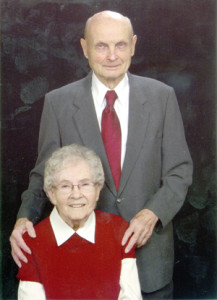 On Saturday, Nov. 7, Barbara and Kenneth Crane of Clinton, N.Y., renewed their marriage vows at St. Mary’s Church in celebration of their 6th wedding anniversary. Accompanying them were their three daughters and sons-in-laws, Patricia and Bryan Ennis, Fayetteville; Sue and Ronald Kielar, Clinton; and Cathy and Martin Glod, Paris Station.
Their children later feted them at a family dinner party at Michael’s in Sangerfield, and attendance at the Glen Miller Concert at the Capital Theater in Rome.
Kenneth was born on Griffin Rd., Clinton, and Barbara spent her childhood in Cobleskill, N.Y.
Three months after their marriage Kenneth was drafted, and spent nearly two years in the Philippines during WWII. After the war, as partner, and later sole owner, Kenneth ran Crane Dairy Company for nearly 40 years, serving more than 1,000 customers throughout Onedia County. In semi-retirement he was building manager at the original Upper Division Campus on Noyes Street, Utica.
Barbara, meanwhile, became a partner in Hearthside Real Estate, later becoming sole owner. In 1980 she joined the staff of the Oneida Madison Pennysavers, where she wrote the “Collector’s Corner” antiques page for 26 years.
Kenneth and Barbara are both now retired and enjoy summers at Limekiln Lake, and winters in Clinton, participating in several social clubs.
The Cranes have nine grandchildren, two of whom are serving overseas in the Air Force and Marines. They also have six great grandchildren, two of them in Williamsville, N.Y., two in Ireland, and two in Korea.