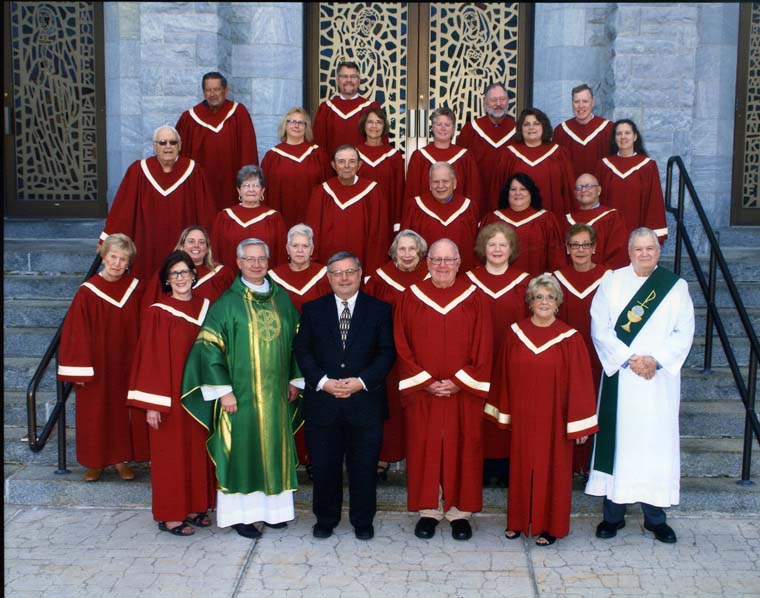 Due to huge events this year, the I.J. Paderewski Choir of the Basilica of the Sacred Heart of Jesus didn’t get its usual July and August break from Friday-night practices.

It sang for Sister Mary Melanie Jaworski, CSSF’s 50th anniversary; Father Andrew E. Baranski’s 25th; and the basilica’s 125th; and also for a convocation of deacons from the Northeast. “We had these big productions,” said choir President Bill Steves.

And finally, the choir got to serenade itself: Its 100th Anniversary Mass was held Sunday, Oct. 15, followed by a concert — “100 Years of Song,” consisting of American and Polish national anthems; Advent and Christmas songs; Lent and Easter tunes; inspirational hymns; and Polish-heritage music.

“I think they’ve done a tremendous job today,” said Father Andrew Baranski, basilica pastor, “most especially giving us a review of everything that they do throughout the year and in years past, so we are very proud of them.

“I couldn’t have been more pleased with the concert today,” said Francis Schultz, director of music for the basilica and the I.J. Paderewski Choir. Most of the singers are not musically trained, he said, and yet “they come and sing for the love of the music, love of their parish, love of the family of the choir.” He noted that for the deacons’ convocation in August, the choir even sang Vespers, which they are not used to. “They came through,” Schultz said.

‘How can you beat that?’

“The choir was awesome,” fifth-generation parishioner Karen Galloway said after the Oct. 15 concert. Karen, wife of Deacon Richard Galloway, said the choir showed “what 100 years of song and praise in our church really meant to them, and they were able to showcase that today for us parishioners.”

“I’m very pleased with how hard our group worked to get ready for this,” Steves said, “and I was pleased with the crowd, and the whole afternoon was very nice. … A couple of standing ovations — how can you beat that?”

Sunday’s finale was particularly unbeatable: A collection of former I.J. Paderewski Choir members joined the choir in the sanctuary to sing How Great Thou Art.

Some of the choir friendships over the years have even turned into marriages. And six choir members’ families used to camp out together, singing so well that other campers would come over and listen.

On a recent Friday night, the choir members huddled in their loft, the church below them as dark as those old-time nights singing around the campfire. It was September, and the dedicated singers were already working on O Holy Night. It actually was the fourth practice of the week: The sopranos, altos, and basses each had their own night.

Parishioners have been learning about various choir members in little bios published in the bulletin since summer, and more information is available at facebook.com/ijpchoir.

According to a history of the choir compiled by Alice Zamojski in 1977 and Carol Dubaniewicz this year, organist Marion Tanski organized the I.J. Paderewski Choir in 1917 and became its first president. After he resigned in 1944, Louis “Prof” Synakowski, Sr. was appointed organist. He retired in 1984 and died in 1985.

Martin Uczen, the next choir director, died in 2015, when current Director Schultz took over. For the recent Friday-night practice, though, Schultz was singing and Robert Synakowski, Louis’ grandson, served as the director, giving the singers advice on topics such as the proper “ahhh” sound.

Tenor Steves and four of the sopranos took a timeout from their practice to head to an interview in the refurbished basement where their excited talk often blended, as if they were still singing.

Steves’ wife, Carol, has been in the choir for 60 years, since 1957. “‘Prof’ asked me to join right out of high school because they had a junior choir,” she said. “And it was a friendship, and the friendships evolved. … Most of us are family.”

“And from way back when,” she said, “our choir — there’s something about the group: No matter who it is, we have always had pretty good pitch when we sang a cappella.”

Laurie Hollis has been in the choir about 40 years. She and her husband, Charlie, who also sings in the choir, had checked out other churches, she said, but “Sacred Heart kept pulling us back, because of the choir. It was our friends in the choir that pulled us back in.”

Even after First Communion season in May, the choir kept at it, Laurie said, because “people are giving good feedback that we’re singing well; they’re loving our songs during Mass, and we get compliments all the time. So I feel an obligation anyway to be here for some of these special things.”

Connie Maute has belonged to the choir for 55 years. She never gets tired of the repertoire. “It’s so much a part of our heritage that we just get a lot of pleasure out of singing over and over whether it’s for Christmas or Easter, whatever,” she said. That heritage includes Polish songs.

Of Director Schultz, who grew up in the parish, Maute said, “We like the new things that he’s brought to us because it’s kind of put us at a different level of singing.”

The whole choir got kudos from Sister Mary Melanie, who said in an email:

Our liturgies are enhanced by the voices and musical accompaniment of the I.J. Paderewski Choir. How fortunate Sacred Heart Basilica is to have for 100 years, such a dedicated and prayerful group of individuals who through the years have led the congregation in song and in prayerful praise of God. With my congratulations and gratitude, I was fortunate to have Frank Schultz, director, and the choir sing for my anniversary Mass, celebrating 50 years of religious life as a Felician Franciscan Sister. This took place on Sunday, July 9th. It was truly a gift, a joy-filled celebration. My hope is that what they bring to our celebrations at the Basilica each Sunday and throughout the liturgical year, will continue for many years to come.

“The best thing I like about the choir is that it does draw people,” said Ted Michalski, an usher and a member of the Parish Council and the Knights of Columbus. “When the choir’s there and they’re having a special, it’s always packed, I mean really packed. … It’s a gorgeous church and it’s a great choir, probably one of the best in the country, I would think.”

“My mother was in the choir, so I really grew up with the choir,” John Kapusniak, a basilica lector, said. “It’s always been a part of my liturgical experience, and it just adds so much to the liturgy. I just love hearing the choir.”

What a gift it was

On July 15, parishioners Flo and Bob Bregande celebrated their 50th anniversary. They went to the 4 p.m. Mass, and the I.J. Paderewski Choir surprised them with song. “A very special gift that they gave us,” Flo said.

The choir is “a great mixture of a lot of different personalities and they all click as a team,” Flo said. “They sound like my angels. They’ve got such a beautiful voice.”

“Since we started going to the basilica,” parishioner Michele Angeloro said, “the choir just makes it so uplifting while you’re there. That makes all the difference. They just make it so lively. It’s such a great atmosphere listening to them sing.”

After hearing the choir sing, one might pose the question that Bill and Carol Steves and their friends heard long ago at those choir-campfires:

“Would you sing that one again?”