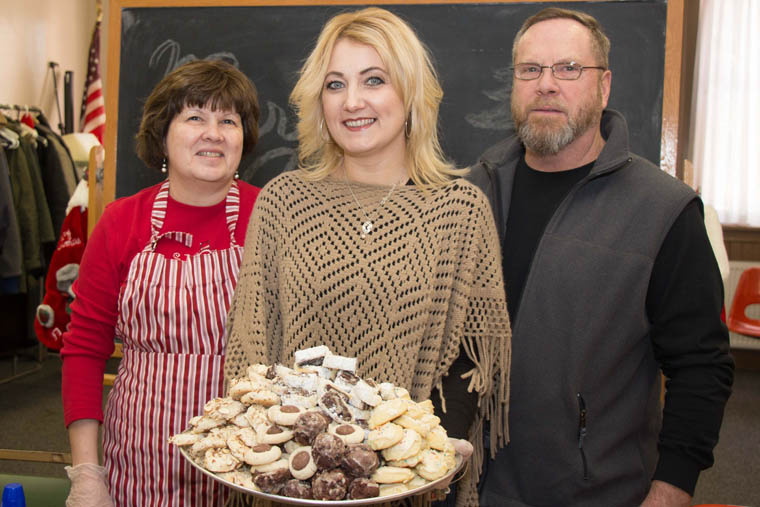 UTICA — Robin Komorek of Waterville got her Christmas wish — to volunteer at Mother Marianne’s West Side Kitchen.

“She asked if I would give this to her for Christmas,” husband Chris said.

Daughter Toni Amodio came along, too, bringing a bowl of candy for every table and a huge tray of homemade cookies from her business, “Sweet Creations by Toni.”

Volunteers welcomed guests, including children, to the soup kitchen, saying “Merry Christmas” and directing them to decorated tables while other volunteers in the kitchen dished out food and assembled trays that were quickly brought out by volunteer servers. Still other volunteers followed up with drinks and trays of pies and whipped cream. And in the background, Bob Schmelcher played Christmas carols on his echo harmonica — including “Jingle Bells” and “Silent Night.”

“This is a great bunch of volunteers,” noted Christmas Day Coordinator Ed Morgan, who is vice chairman of the soup kitchen advisory board. “They’re upbeat, friendly. Half of them I don’t even know. They’re very cool.”

His sister-in-law, Rosalie Siuta, likes helping out on all the holidays. “It’s probably the best feeling in the world to be able to give back, and to help” people in need, she said.

Regular volunteer Elvira Turnpin dressed up as Santa’s elf. “I figured this would be nice for the kids,” she said.

Turnpin recalled the time she was in a New York City shelter with her two infant daughters. That’s why she helps at West Side Kitchen four days a week and spends a fifth day at the Utica Salvation Army. “So I give back — it’s from the heart.”

Utica Troop 101 Boy Scout Daquan Forehand, a student at Mohawk Valley Community College who wants to be an EMT, volunteers on Wednesdays but decided to help at Christmas, too. “Christmas to me is basically about just giving back,” he said.

Lorraine Haley and Dan Hoffman, who were friends in school, decided to come to the soup kitchen after reading about it in the newspaper. “I thought, it’s time to give back,” Lorraine said. “So we decided to come down and help out as much as we can.”

Cheryl Wakeel’s first exposure to the soup kitchen was on Christmas five years ago. It was such a moving experience that not only does she return every Christmas, but she also helps out during the week, serving as crew chief on Wednesdays, and beginning in January, she’ll be there on Mondays, too.

“I love it; it feels good to help out,” noted Vikki Commisso, who joined Cheryl and her son, Gregory Wakeel, prepping and dishing out food, along with Shirley Schmelcher and Kathleen Carter. “It makes me feel good; plus I meet wonderful people.”

Added Shirley, who was there with daughter Lynda and husband Bob: “It’s our way of giving back to the community.”

After hearing there was a need for volunteers, Michelle Thurston, a nurse tech in surgery at St. Elizabeth Medical Center in Utica, came with her daughters, Jordan Tartaglia, a student teacher, and Sara Tartaglia, an MVCC student who wants to be a social worker.

“We wanted to help out,” said Sara.

Perhaps Amodio summed it up best for the volunteers:

“The best gift you could ever give someone is your time.”

Bob Stronach is chairman of the Mother Marianne’s West Side Kitchen advisory board for St. Joseph and St. Patrick’s Church. The Kitchen is named after parish daughter St. Marianne Cope, who attended school and grew up in the parish before becoming a Franciscan sister.