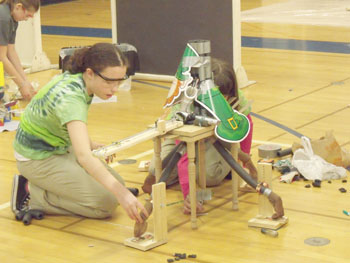 The emotional highlight of the competition was the dramatic Sumobots bronze medal match won by the Gross twins, Alex and Teddy. The Sumobots are robots which battle to force each other out of the ring. The twins were last-minute substitutes in the robot competition and hadn’t touched the device prior to their only loss in their first match. They battled back with hundreds of spectators cheering them on in the final match.

Katherine and Grace Babcock paired up to take bronze in the chemistry event titled,  “Can’t Judge a Powder.” Katherine Babcock and Sarah Mandanas paired up to medal in the Center for Disease Control event titled  “Disease Detective,” while Lilli Proe and Cameron Rustay medaled in Orinthology. John Lara and Sean Relyea took fourth in Car of the Future.

“The key to our future success is in our mentoring program,” said Babcock. “We had over 30 juniors and seniors as mentors this year and 24 of those students served as event supervisors at the regionals. We’re still learning ways to use all of our mentors and we are trying to set the stage for a C-Level team to compete on the high school level.”