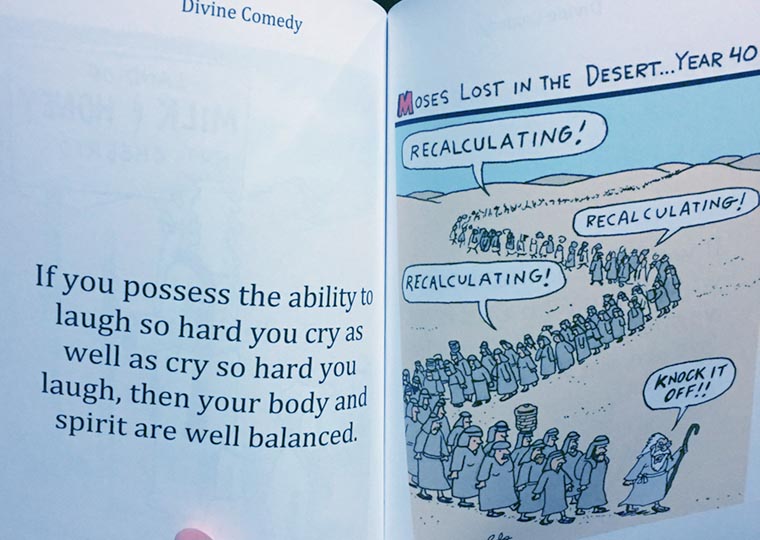 There is the Book of Life and then there are — one hopes — the not incompatible religious-cartoon books of Dan Reynolds, replete with puns and zany confessions — all of them forgivable.

His funny greeting cards, Reynolds said, are sold in every city in the country, and his cartoons now appear in every issue of the national magazine Catholic Digest. His Reader’s Digest cartoons — more than 200 of them — appeared in a four-month exhibit in 2011 at the Everson Museum in Syracuse.

Reynolds, who has a certificate in pastoral care, is coordinator of new evangelization for Divine Mercy Parish in Central Square. He invites churches and schools to contact him so that he can visit and deliver his “Divine Comedy” presentation: “a combination of humor, some stories, and some jokes.” (He can be emailed at divinecomedydan@gmail.com. His website is www.divinecomedydan.weebly.com.) 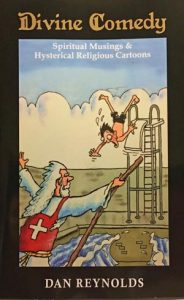 Rather than a picture dictionary, his show is more like a picture lectionary: Attendees will laugh at cartoons while enjoying “an opportunity to go a little deeper too.”

Asked how he navigates the line between acceptable fun and overdone humor, he said:

“I weave together some of my cartoons to bring out a message about how important humor and joy is in terms of our faith life. It’s really important. Jesus didn’t walk around with 12 disciples who had gloomy faces all the time. They radiated joy, and that’s what he wants us to do too.”

The Navy veteran knows how to draw Jesus; as a cartoonist, he can draw anything. And if he thinks of a cartoon that is funny but does not conform to his high standard, he invokes his “ixnay” prerogative and spikes it.

But those who witness his “Divine Comedy” presentation must be ready to laugh.

“So, in doing the ‘Divine Comedy’ presentation, that’s kind of my goal.”

Asked if he is becoming a deacon (in a couple of more years, “God willing”) to get ecclesiastical approval of his cartooning endeavors, Reynolds said:

“And so, for me, because religion has always been an important part of my life, I automatically gravitated toward doing religious cartoons. Those aren’t the only ones that I do, but I’ve certainly done a fair share in my day of religious cartoons.”

If he goes on to finish his diaconate studies, don’t look for him to hand out cartoons in lieu of a sermon.

“Developing and honing that sense of humor in religion, I think that will help me in giving homilies,” he said, “and sometimes you can just verbally share the idea of a cartoon that you did.” He figures that if the people in the pews are laughing, at least they’re not sleeping.

But how does an artsy guy fit into the group studying for the diaconate?

“Every one of us is kind of coming from a unique perspective,” he said. “We have a lawyer, we have an engineer, we have another person who works for Stickley Furniture. I mean, it’s a very broad thing.”

Reynolds worked 22 years as the youth-activities coordinator for the Oswego City-County Youth Bureau. For a long time, he didn’t even know he could draw; his awareness of the ability just popped up one day like a blurb over a cartoon. He is a fan of Gary Larson’s “The Far Side.” Reynolds counters with what might be called “The Faith Side.” “It’s got to be the Holy Spirit,” he said of how he comes up with ideas. “It has to be a gift. We each have our own special gifts. We need to find out what they are. We need to be patient, and look for them in our lives.”

A professional cartoonist for 27 years now, he has 26 other books to his credit. He also paints portraits and nature scenes. Two of his greeting cards feature stunning color portraits of Pope St. John Paul II and Mother Teresa (also called St. Teresa of Kolkata); a larger version of the St. John Paul II portrait hangs in the Divine Mercy Chapel. Other paintings include Jesus with a neutral expression, Jesus with a half-formed smile, Jesus with exhausted eyes, and Jesus with his miraculous hands healing the blind man.

Reynolds, who experienced an amazing healing himself, speaks in a soft voice, as if still in awe over his survival. One day in 2008, he was at Mass with his wife when he felt “a horrible pain” in his abdomen: testicular cancer. He remembers going to bed and saying “almost a visual prayer”: He saw himself kneeling in the Garden of Gethsemane next to Jesus and praying something like this:

“‘I don’t know if this can be taken away from me. If this cup can be taken away from me, your will be done. If not, your will be done.’ And so, it was almost like a miraculous happening. … From that very moment I said that prayer, this cloud lifted. And this was before all the chemo. It was a cloud of fear lifted. From that point on, I accepted my fate knowing that I was in God’s hands. And I even knew that no matter what happened, even if I died, I knew it was going to be OK.

“So that changed my life.”

Then came four months of chemotherapy, during which Reynolds felt like a “zombie.” Even then, curled up in bed in the fetal position, he sometimes roused himself to draw cartoons. He wrote an essay titled “Fighting the Tumor with God Given Humor.” He shocked a nurse one time by telling her that a cartoon she admired was actually his creation; it had appeared in Reader’s Digest.

He finished treatment in February 2009. He has gone from zombie to comedy. “I feel fine,” the 57-year-old said. “According to the doctor I’m technically cured.”