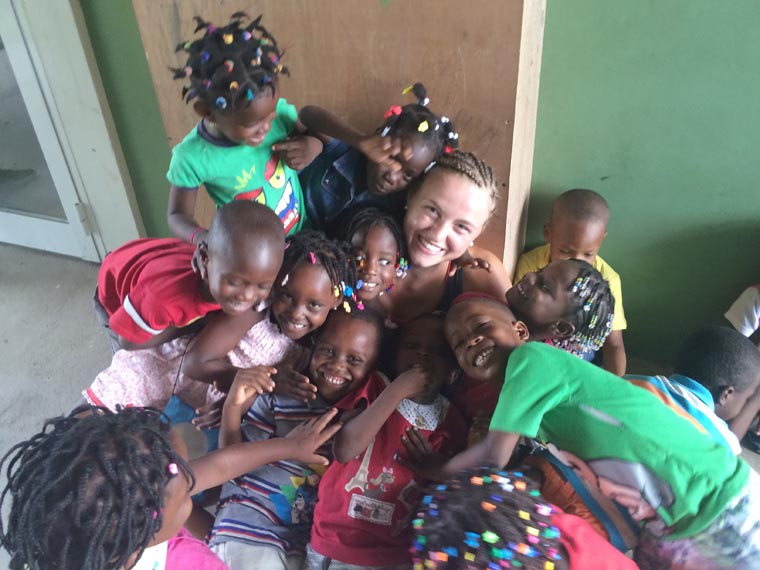 Niagara student spends her summer volunteering at school in Haiti

The poorest of the poor in Haiti have dreams too, and Brianna Smith was there to support them.

Smith, 20, a parishioner at St. Joseph’s Church in Camillus and a senior at Niagara University, spent seven weeks of her vacation this summer teaching at a summer camp in the Caribbean nation.

She and four other Niagara students taught at the camp based in a school co-founded by Ed Brennan, a Niagara alumnus.

“They wanted to pick some of the poorest of the poor” to attend the summer camp, Smith said.

Although she was taken aback by the poverty that exists outside the handsome school campus, she was impressed by the ambitions of the children.

“They were very curious about where we were from,” Smith said. “We said, ‘We’re from America.’ And most of them would always say, ‘Oh, I’m coming to America someday, I’ll see you someday.’

“Just hearing about their aspirations for after the school was really touching. Some would tell me they wanted to be a doctor or a teacher; and hearing they have these goals, helping them achieve those goals,  was really important for me to hear.”

Smith said that her Confirmation preparation at St. Joseph’s informed her decision to spend the summer in a Year of Mercy pursuit in the “very hot and humid” conditions of Haiti.

“When I was in my Confirmation at St. Joseph’s,” she said, “we had to do numerous service activities, at least five or six of them, before we could make our Confirmation.” One of those activities involved landscaping work at the Brady Faith Center in Syracuse.

Also, during her senior year at West Genesee High School, she taught religious education to a class of kindergartners at St. Joseph’s.

And she remembers the instruction from Cindy Heath, Director of Youth Ministry and Confirmation at St. Joseph’s.

“She was all about us doing the service activities,” Smith said.

Heath was not surprised at all by Smith’s summer of service, which involved a lot of sunscreen, a lot of bug spray, and a lot of drinking water throughout the day.

“She is an incredible young lady and someone that did not disappear here after Confirmation,” Heath said, “like some kids do; they finish up their Confirmation and they’re all done. She’s someone that continued to teach religious education here to our younger children.”

She added: “She’s a wonderful young lady, comes from a great family whose parents I’m sure have a very big influence on her as well.”

Smith’s parents are Kristin and Shaun Smith. Her brother, Ryan, is a junior at West Genesee.

Brianna flew to Haiti on July 10.

“Once we landed,” she said, “we had to take a school bus to the actual school.” She experienced “immediate culture shock” on the two-hour drive.

“Looking out the windows of the bus and seeing people’s living situations and a lot of houses without roofs, people walking around barely clothed, there was garbage all over, it was just a very different scenery than we’re used to here in America,” she said.

She added: “We had known that it was a country of poverty but there is nothing that can actually prepare you for seeing it firsthand.” There were also a lot of wild dogs and many goats.

When the bus arrived at the campus, the school seemed like a mansion compared with the landscape around it. She found the buildings well-constructed, with fences around the campus and guards on duty 24/7.

“Not that Haiti’s not safe,” she said, “but it’s a hard situation when this school has so much and the houses immediately next to it have so little.”

The school is called Lycee Jean-Baptiste Pointe du Sable, in the town of Saint-Marc. It is surrounded by mountains.

The days started at 8 a.m. with breakfast. The Niagara group, assisted by a student from Duke University, worked with the children on activities including street hockey, soccer, and basketball. Smith herself is on the swimming and diving team at Niagara. Her high school activities also included the student council.

Lunchtime was also very important at the camp. The school supplied two meals a day for the campers. There was a lot of bread and rice and pasta to keep them full because it was unknown what or if the children were eating when they got home.

“I think the two meals a day were huge for them,” Smith said. “Even if it’s just two meals, it’s more than kids in Haiti have.”

There were a lot of bugs in the mountains, but the biggest one was quite harmless.

The afternoons would involve library activity. Smith’s group would read stories such as “The Very Hungry Caterpillar.” The students then took circular sheets of paper and drew pictures of their favorite foods. The teachers then put all the circles together and made a huge caterpillar.

“They had a lot of fun with it,” Smith said. “They were laughing and smiling and excited to learn. We loved it too. We were always excited to teach them something new, always trying to think of what they would like the most.”

Buses took the children home around 3 p.m., and the teachers would go back to their bungalows.

Asked what surprised her during her stay, she said she was struck by “just how grateful the kids were and the adults at the school to have us there, and how excited the kids were to learn, and how caring and generous the people in Haiti are with what little they have.”

One night, Smith’s group went into town and it started raining. The grandmother of one of her students insisted they pack inside her small house to avoid getting soaked. “She was genuinely concerned about our well-being,” Smith recalled.

“Even at lunch … they would offer their food to you first before eating it,” she said. “They have so little but also want to give so much.”

The school currently is for children in preschool up to fifth grade. Next year, Smith said, the school hopes to add a sixth grade. The school’s dream is to expand one day to the 12th grade so that the students can go on to a university in Haiti.

Niagara University is proud of Smith’s service there.

“The children of the school are among the poorest of the poor in this impoverished country.

“Brianna and the other interns engaged in various sports activities such as soccer, field hockey, and basketball, as well as cooperative games such as parachute play, flying kites, and dancing and singing with the children. Brianna created many literacy activities to promote English language learning, which were implemented throughout the summer. The interns built wonderful relationships with the children, helping them feel valued and appreciated as individuals.

“We at Niagara University are so proud of the servant hearts of our students like Brianna who are willing to give up their time during the summer to serve others. I truly believe that their work in Haiti will not only have a lasting impact on the children they encountered, but will forever influence the way they view the world.”

Smith returned to Syracuse Aug. 27, a long day of travel. She gave her parents a big hug, ate some American food, and slept very soundly. When she graduates from Niagara, she will immediately enter graduate school in the field of education. She is not exactly sure where she will wind up, but “I want to continue helping those children that are less fortunate.”

Her future stretches like a huge paper caterpillar running all the way to Haiti, the land where children dream big and altruists spend their summers.