Castro says pope is so impressive he might start praying again 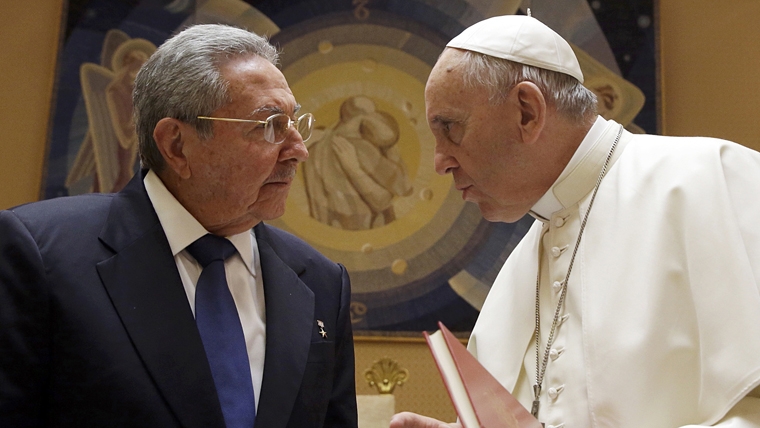 VATICAN CITY (CNS) — After spending close to an hour with Pope Francis, Cuban President Raul Castro told reporters he is so impressed by what the pope does and says that he might start praying and could even return to the church.

“I had a very agreeable meeting this morning with Pope Francis. He is a Jesuit, as you well know. I am, too, in a certain sense because I was always in Jesuit schools,” Castro told reporters May 10.

“When the pope comes to Cuba in September, I promise to go to all his Masses and will do so happily,” the president told reporters at a news conference he held later in the day with Italian Prime Minister Matteo Renzi.

Castro said he left his meeting with the pope “very much struck by his wisdom, his humility and all the virtues that we all know he has.”

“I read all the speeches of the pope,” Castro said, and he told reporters that he already had told Renzi, “if the pope continues to speak this way, sooner or later I could start praying again and return to the Catholic Church. I’m not kidding. I’m a communist, [a member] of the Cuban Communist Party. The party has never admitted believers.”

Today, he said, the country allows people to hold important positions even if they are not members of the party. “It’s a step forward,” he said, although many of the reforms he would like to make are still being implemented.

Jesuit Father Federico Lombardi, Vatican spokesman, said that during their private meeting in a studio of the Vatican audience hall, Castro thanked Pope Francis for “the active role he played in improving relations between Cuba and the United States of America.”

In December, Castro and U.S. President Barack Obama announced that their nations were working toward re-establishing official diplomatic relations. Both leaders credited Pope Francis with helping to secure the deal through his letter-writing and by hosting a secret meeting at the Vatican between Cuban and U.S. representatives last fall.

Castro also relayed to the pope the expectations of the Cuban people for his upcoming trip to the nation and outlined how the preparations were going, Father Lombardi said.

During the traditional exchange of gifts, Castro gave Pope Francis a commemorative medal featuring Havana’s cathedral and, in honor of Pope Francis’ concern for migrants, a contemporary painting of a cross made up of migrants’ boats with a migrant kneeling before it in prayer.

The Cuban artist known as Kcho, who made the painting, was present at the audience and told Pope Francis he was inspired by the pope’s expressions of concern for the thousands of migrants who risk their lives crossing the Mediterranean Sea seeking security and a better life in Europe.

Pope Francis gave Castro a copy of his apostolic exhortation, “The Joy of the Gospel,” and a large medallion featuring St. Martin of Tours covering a poor man with his cloak. Father Lombardi said Pope Francis told Castro the medallion is a reminder not only of the obligation “to assist and protect the poor, but also to actively promote their dignity.”