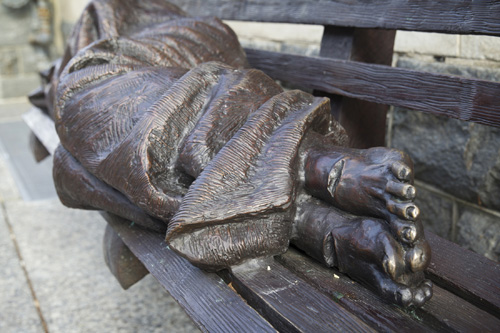 Here’s a look at some of the stories making headlines today:


This morning, reporter Alison Parker and photographer Adam Ward of WDBJ7 in Virginia were murdered during a live broadcast. Eternal rest grant unto them, O Lord, and let perpetual light shine upon them.

Pope Francis will see ‘Homeless Jesus’ during his U.S. visit. The seven-foot-long bronze sculpture sits in front of a downtown Washington building occupied by Catholic Charities of the Archdiocese of Washington.

Want to try to win a chance to see or watch the pope address Congress in DC?
• Today is the last day to enter Senator Chuck Schumer’s lottery here.
• And if you live in the 24th Congressional District, you can enter Rep. John Katko’s lottery for tickets to the live broadcast on the West Lawn of the Capitol here.

From PressConnects, a look at the Southern Tier’s Theology on Tap series: Beer, appetizers and Catholicism at local pub

And from Crux: The ‘Fastest Nun in the West’ could become a saint