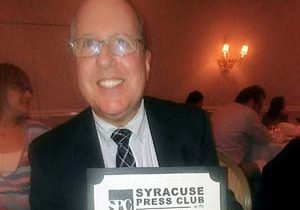 In the category Print Special Interest, News Feature or Series, Maguire was nominated for his series on the new Brady Market at 307 Gifford St. in Syracuse. The market, which operates in connection with the Brady Faith Center, employs community residents who need a first, second or third chance in life, and every dollar spent there increases programming in the community. The series quotes Father James Mathews: “This is the most visionary project on the Near Westside that we have seen in years and we are most grateful.”

The other finalist in the category is Kenneth Sturtz, for his In Good Health story “How a Young Buffalo Woman Learned to Embrace Hearing Loss.”

If a category has 15 or more entries, first place, second place and up to three honorable mentions can be awarded, the SPC says. The rankings will be revealed at the 2022 SPC Awards Dinner on May 7 at the Collegian Hotel & Suites in Syracuse.

“This year marks one of our most competitive contests in recent memory,” the SPC says. “We received more than 400 entries across 57 categories. Our judges from partner press clubs in California, Florida, Idaho, Louisiana, Pennsylvania, Ohio and Wisconsin had the daunting task of reviewing and ranking the top entries for each category. On average, only one-third of the entries submitted in each category earned a spot on the finalists’ list.”