ROME — A parishioner of Transfiguration Church spoke to a member of 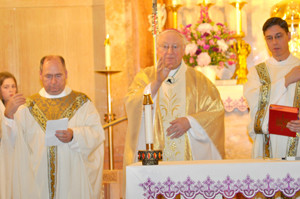 the Knights of Columbus just before the anniversary Mass began: “Just wait till you hear the choir,” he said.

“Oh really? Are they good?” the Knight asked.

“They’ll knock your cape off,” the parishioner responded.

The combined choirs of several Eastern Region churches and the Knights of Columbus helped celebrate the 100th Anniversary Mass at Transfiguration Church on Nov. 29. The Mass was celebrated by Bishop Thomas Costello who was joined by more than 30 diocesan priests. Nearly every diocesan priest of Polish decent was there and they traveled to Rome from as far away as Pulaski, Cortland and Binghamton. Parishioners greeted the retired bishop with a dozen roses. “With a greeting like that, I’ll be back soon,” Bishop Costello told them.

The church was filled and parishioners, the administrator, Father Lucian Urbaniak and Deacon Michael Gudaitis were also in the sanctuary. The vicar for the region, Father Philip Hearn, pastor of St. Peter & St. Mary’s Church was there as well. Readings were proclaimed by parishioners and a portion of one of the hymns was sung in Polish. The parish was founded by Polish immigrants 100 years ago. Bishop Costello touched on the parish’s history and the love the people have for their church. He went through the history of the area in relation to the ethnic groups that settled there.

“We are an immigrant people,” Bishop Costello said. “Ethnic groups left their homeland because of political upheaval, agricultural challenges — to escape famine — the Irish came in 1817 attracted by the prospect of employment digging the Erie Canal. They established St. Peter’s Church in 1837. Next, the people of Germany began to arrive, exiled by revolution. They settled in Coonrod and Lynchville south of the canal in Canal Village. In 1848 they bought a tiny church called St. Mary’s for $900.”

The Italians came next, the bishop said, followed by Lithuanians, Syrians and Slovaks, and then in 1895, the ever-growing Polish population established a fraternal organization under the patronage of St. Michael the Archangel  to foster and preserve Polish culture and traditions. The first Mass for the Polish community was celebrated by Father Simon Pniak, the pastor of Holy Trinity Church in Utica, in a hall on South James Street. Before there was a church building, Mass was celebrated in homes and in the basement of St. Mary’s Church. Priests from other locations in the diocese came to celebrate Mass. A group of local men were the first organizers of the church. They obtained a charter on Nov. 9, 1909 in the name of Transfiguration of Our Lord Church. It would be a few more years before Bishop John Grimes would lay the cornerstone of the church on June 15, 1913. The history of Transfiguration Church reports that approximately 4,000 Polish people from the area attended the dedication ceremony. That would not be the same church that is there today. Father John Tarlowski, pastor from 1918 to 1926, wanted to provide a proper place for a school for the parish children. He chose to purchase St. Joseph’s Episcopal Church on Ridge Street, off South James Street.

“Father Tarlowski bought the property in 1920 and improved it all for less than $20,000,” Bishop Costello said in his homily. “The church was rededicated on Sept. 5, 1920 by Bishop John Grimes.” Three years after that, the school was opened with the Felician sisters serving the youngsters.

After going through a comprehensive history of the area and the parish, Bishop Costello concluded his homily saying, “But today is not about buildings or renovations, mortgage burnings and new construction. Nor is this anniversary really about priests or sisters. This centennial is about church and church is people and you are that people, you are the church,” he said. “This celebration is about community and fellowship. This celebration is about faith and friendship.”

Bishop Costello talked about all the organizations, committees, groups, associations, teams and councils that have been part of Transfiguration’s history. “You know how to have a good time,” he said. “All the balls, dinners and speeches, field days and jubilees — you clearly have learned how to enjoy each other’s company. You are the living stones that make up this church.”

The parish has had 19 pastors in its 100 years, Bishop Costello pointed out. Father Urbaniak served as an associate pastor nearly 20 years ago and returned as administrator in 2008. The parish is truly the product of hard work, perseverance and the people’s love of their faith. The parish is grounded in Polish tradition and culture, but like most ethnic parishes today, the church is made up of members of many cultures.

Stewart Richards is a trustee of Transfiguration Church and joined the parish in 1966. He said it is refreshing today to see the younger faces coming to church and he thinks Father Urbaniak’s leadership has a lot to do with that. “We’re more vibrant now,” Richards said. “His personality is really what does it. He loves young people and he has been able to draw them into our church.” Richards said the fall festival the parish hosted in September was a huge success. “We had a dance with a Polish band from Albany. It was excellent, it was just super. I really feel like we’re more vibrant, more active than we’ve ever been. I know our collections have doubled since Father Urbaniak came.”

Richards clearly loves his parish and wants to see Polish traditions stay. He knows it is important for the church to grow and be open to new members. “We’re the only church in the area that offers a Miraculous Medal and St. Jude Novena every Monday at 7 p.m. About 80 to 90 people come,” said Richards.

All the events and history that make up Transfiguration Church could be summed up in what Bishop Costello said at the end of his homily: “You are the church, you are the people of God and this is your anniversary.”