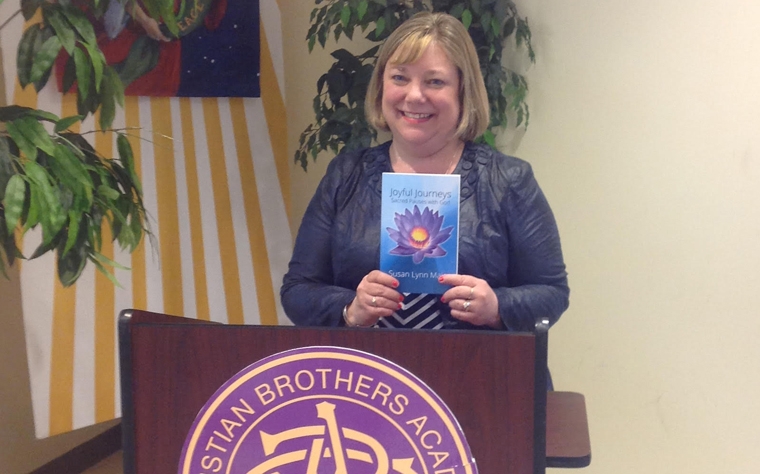 “I am so excited about this journey,” remarked Susan Lynn Major Feb. 5 as she addressed those who had come to her book signing. “Today is special because I get to present this book to my CBA family.”

Major, an inspirational speaker, retreat facilitator, author and Christian Brothers Academy teacher, marked the release of her new book with a signing at the school.

Major’s book, Joyful Journeys: Sacred Pauses with God (Divine Phoenix), was released Jan. 11. Major said writing the book was therapeutic for her during her illness. Major was diagnosed with stage three breast cancer in 2009 when she was 39 years old. “I felt inspired,” said Major. “When I sat down to write, I was in God’s hands. And, I received strength from my family and community to keep going.”

The work, a compilation of reflections she wrote over the years, was put into book form four years ago.

A native of Skaneateles, Major resides there with her husband Matt and three children, Peter, Anna and Grace. She is a parishioner of St. Mary of the Lake where she has served as the director of religious education. She has also completed the formation for ministry program. As a lay minister of family ministry, Major has led retreats for men, women and children. She founded the speaking organization Joyful Journeys and Sacred Mornings for Moms, a women’s group that met once a month at Stella Maris Retreat and Renewal Center. She wrote reflections for the group.

Major is a religion teacher at CBA, a position she has held since 2010. She earned her bachelor’s degree from SUNY Fredonia and her master’s degree in secondary education from Le Moyne College.

Major’s faith journey inspired her to write the book. “My relationship to God and my Catholic faith has been pivotal in my life and I wanted to be able to share that with as many people as possible,” explained Major.

“The book is a captivating story of hope and faith in God,” she said. “Whatever we are struggling through, the book is helpful. God gave me the inspiration to write this book and I hope it helps people. We’re meant to share our stories and inspire one another.”

Major was inspired by one of her students in particular — CBA junior Jack Sheridan. He was diagnosed with leukemia on May 29 and is fighting a courageous battle against cancer. Major was Jack’s seventh and eighth grade religion and homeroom teacher. Major decided to donate 10 percent of the proceeds of her book sales from Feb. 1 to Feb. 6 to Jack and his family to help with medical expenses. “I feel like I’m doing God’s work,” Major said. Major remembered the financial burden placed on her family when she received treatment for her illness.

“It’s very generous of her [Major] and she’s showing the bond that exists between cancer survivors,” Jack said. “I always loved her as a teacher.”

Jack’s mother Kim expressed her gratitude for the financial help from Major. “I think it’s wonderful,” she said. She is also grateful for the support the family receives from the CBA and Immaculate Conception communities. “Thousands of people are praying for him,” said Sheridan.

Jack’s treatment consists of chemotherapy through a spinal tap once weekly until March, then he will receive it monthly until March 2017.

Jack was a former member of CBA’s baseball team, playing third baseman and as pitcher. Today, he is not attending classes, as he doesn’t have the strength to do so. He will repeat his junior year.

“Your story is inspiring to all of us,” declared Major as she addressed Jack.  Along with many family friends, members of the communities of CBA and Immaculate Conception School in Fayetteville, where Kim works, stopped by to wish him well.

Caroline Calimlim, substitute teacher at Immaculate Conception School and a friend of Jack’s mother, found the book to be “devotional and it touches your heart,” she said. “It’s good reading material if you’re feeling down.”

The book is divided into five sections: Passion and Purpose in the Journey, Living and Authentic Self, A Sacred Walk with God, Reclaiming My Spiritual Compass and Embracing Sacred Breath. At the end of each section, Major has included A Sacred Pause, which includes an affirmation, reflective questions and a space to write one’s thoughts.

Major’s story is a message of hope and inspiration for those who are struggling and it emphasizes the need for faith.

Major said the book has been well received by people of all ages and that “teenagers on up to the elderly are reading it.”

To purchase the book, visit www.susanlynnmajor.com.